Bernie, Biden, and My Father

Bernie has the highest favorability ratings of all the primary candidates and the latest national polls show him beating Trump in the general election. 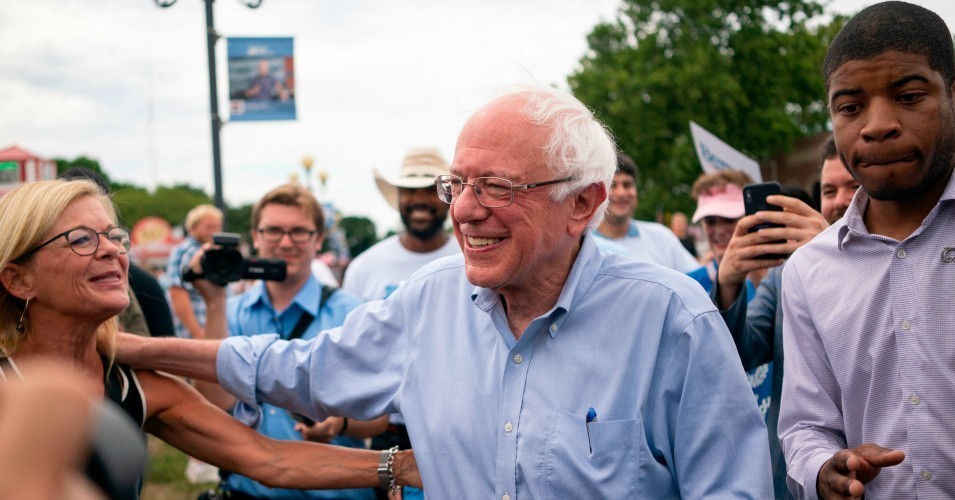 I’d describe how Bernie has a powerful movement behind him, built over years, with millions of small donors. (Photo: Alex Edelman/AFP/Getty Images)

21 Jan 2020 – My father was a generous and forgiving man, devoted to his family. Although we didn’t always agree, he taught me a lot about many things, and I always admired his decency, his integrity, and his resilience. In 2014, at the age of 85, he passed away after several years of deteriorating health.

If my father were alive today, I’m sure we’d still be having our weekly Sunday morning breakfasts together. The number one topic—after his grandchildren—was usually politics. So here in January 2020, that would undoubtedly mean two lifelong Democrats (I’m now 66 myself) sitting at his kitchen table, debating the relative merits of presidential candidates Joe Biden and Bernie Sanders.

But to first take a step back, I should note that my father never would have believed that Donald Trump could become president of the United States. He would have been stunned even more by the bigotry, brutality, and corruption that characterize this White House and its GOP enablers, from Muslim bans to racist tweets to children in cages at the Mexican border to impeachable offenses. After all, I can’t count the number of times my father would reassuringly tell me, “Roy, remember, most people are basically good and honest.”

Over many years, our breakfast conversations took on a consistent form. First, I’d express dismay or outrage over current events—the torture of US war-on-terror prisoners; the deception-driven invasion of Iraq; the callous treatment of Hurricane Katrina victims; Wall Street’s predatory role in the financial meltdown; the unlawful mass surveillance of Americans, the growing divide between “haves” and “have-nots”; and other lesser injustices. My father, even when feeling much the same way as I did, would then typically ask me whether I’d really given sufficient consideration to all opposing points of view. That would eventually lead to my wondering aloud how those viewpoints could possibly be defended by a reasonable person. And often enough he’d smile and calmly respond, “You’re right.”

That single “You’re right” was a cherished prize. It reassured me that he and I were now seeing the world through similar eyes. In contrast, there was also my father’s triple “You’re right, you’re right, you’re right.” This was almost always said with some combination of frustration and exhaustion, and it had a very different meaning. It meant that, although the contrary evidence I offered was compelling to me, my father’s own position on the matter was still firmly entrenched. Sometimes it meant that relinquishing it would be a source of too much discomfort or pain for him. So that phrase represented closure of a different sort: it told me it was time for a new topic.

All of this brings me back to Bernie and Biden. Despite being progressive in his outlook in many ways, it’s likely my father’s natural inclination would have been to support the former vice-president. Like all of us to varying degrees, he found it hard to escape the powerful tendency that psychologists (like me) call status quo bias. In a nutshell, we often prefer routine options—even if they’re not particularly good ones—rather than having to face alternatives that are much less familiar to us. This makes us skeptical of change, especially profound, transformative change—even when that’s exactly what we need. In my father’s case, he almost always tried to see the glass as half-full rather than half-empty. And like many who grew up during the Great Depression, caution was a watchword for him. His own father, a Jewish immigrant from Russia, started out in America selling pots, pans, and plates from the back of a horse-drawn cart. He probably taught my father early on that an unexpected bump in the road could jeopardize everything.

If we were still having our breakfasts, my father’s cautiousness would probably lead him to comment, “I agree there are very serious problems, but do we really need solutions as ‘extreme’ as the ones Sanders is proposing?” He’d be surprised when I told him that Bernie’s key policy proposals are actually supported by most Americans. They believe healthcare should be a right—not a privilege—available to everyone. They think workers should receive an hourly wage of at least $15. They believe nobody should be unable to attend college because it’s too expensive. They think climate change isn’t being taken seriously enough and want to see more urgency in tackling it. And they believe giant corporations and billionaires should pay more taxes and have less influence over our politics. My father himself would agree with pretty much all of those objectives. But it would still probably take some time for him to accept the idea that gradual, bipartisan, incremental change isn’t going to make them happen.

It’s likely my father would also prefer to believe that Biden is just as dedicated as Bernie is when it comes to accomplishing these goals. In part, that’s because the Democratic Party was different when he was a younger man. Back then it was the party that aggressively confronted inequality—going to bat for working Americans and their unions, making sure the aging were protected with Social Security and Medicare, fighting hard against poverty and for civil rights. Indeed, I still recall the portrait of JFK that hung in the back office of the family’s restaurant supply business (yes, those pots, pans, and plates again) for many years.

Unfortunately, today’s Democratic Party leadership isn’t the same. It’s certainly not as bad as the Republicans, but it too has fallen prey to the corrupting corporate influences that now wield so much power in Washington. So Biden’s status as the Democratic establishment’s favored candidate isn’t necessarily a badge of honor anymore (especially since his track record includes laying the groundwork for the racist war on drugs and mass incarceration; repeatedly calling for cuts to Social Security; supporting credit card companies over bankrupt consumers; and advocating for the Iraq war). After several breakfast discussions on these topics, I like to think my father would eventually have said, “Roy, you’re right.”

There’s also little doubt that at some point during this primary season my father would have politely (always politely) challenged me on the so-called electability issue. “Can someone who calls himself a democratic socialist actually win?” Isn’t beating Trump what’s most important?” Fortunately, I wouldn’t need to downplay his concerns, because I could honestly tell him there’s good reason to think that Sanders has a better chance to win the White House than Biden or anyone else.

I’d describe how Bernie has a powerful movement behind him, built over years, with millions of small donors; how so many people—especially those much younger than the two of us—admire him for his authenticity, his integrity, and his unwavering commitment to advancing the common good; and how democratic socialism really just means ensuring fair treatment and decent and fulfilling lives for all Americans, not just the privileged few. I’d also remind him that Bernie has the highest favorability ratings of all the primary candidates, and that the latest national polls show him beating Trump in the general election. I wouldn’t necessarily expect immediate agreement from my father on these points either, but I think he’d at least start reconsidering some of his assumptions. And “You’re right” might be just a few meals further down the road.

When I play out all of these imagined conversations in my mind (and I’ve done that more than once in recent days), I actually believe that the storybook ending is surprisingly likely. Some Sunday morning before the Pennsylvania primary in April, my father would say, “Roy, I’ve decided to vote for Bernie Sanders.” And then he’d follow up by asking me to give him a ride to his polling place on election day.

Meanwhile, in real life, I so regret that there are no more weekly breakfasts together. But when I head to Iowa later this month as a volunteer for Bernie, I’ll be wearing my father’s old winter coat. And I know how much I’ll miss telling him about my experiences there when I return home.