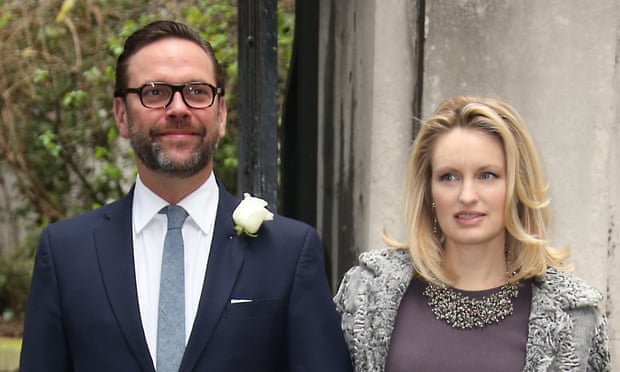 14 Jan 2020 – Rupert Murdoch’s son has strongly criticised his family’s news outlets for downplaying the impact of the climate crisis, as bushfires continue to burn in Australia.

James Murdoch and his wife, Kathryn, issued a rare joint statement directly criticising his father’s businesses for their “ongoing denial” on the issue, which has been reflected in the family’s newspapers repeatedly casting doubt on the link between the climate emergency and the bushfires.

“Kathryn and James’s views on climate are well-established and their frustration with some of the News Corp and Fox coverage of the topic is also well-known,” a spokesperson for the couple said, confirming a report in the Daily Beast. “They are particularly disappointed with the ongoing denial among the news outlets in Australia given obvious evidence to the contrary.”

Read more: The Australian says it accepts climate science, so why does it give a platform to ‘outright falsehoods’?

James Murdoch was most recently the chief executive of the family’s 21st Century Fox entertainment business, leaving when it merged with Disney. He is making media investments through his own Lupa Systems company but continues to sit on the board of the family’s newspaper business, News Corp, which also owns the Times and the Sun.

The bushfires have focused attention on the likes of Andrew Bolt, a political commentator for News Corp’s Australian newspapers who is known for promoting the views of climate science deniers, and for his own attacks on “alarmists” and his derision of climate change science.

He also has a programme on the Murdoch-owned Sky News Australia, where he has criticised the “constant stream of propaganda” on the public broadcaster ABC about the role of the climate crisis in the bushfires.

“Politicians who should do better are out there feeding the fear and misinformation,” he said in a recent broadcast criticising politicians who said carbon emissions needed to be cut to avoid future fires. “As if that would stop a fire. You’d have to be a child like Greta Thunberg to believe that fairytale.”

US viewers have also heard commentary from Fox News presenters such as Laura Ingraham, who has said that “celebrities in the media have been pressing the narrative that the wildfires in Australia are caused by climate change”, before introducing guests who cast doubt on this interpretation.

Read more: James Murdoch: ‘There are views I really disagree with’ on Fox News

James Murdoch’s criticism sheds light on the family’s internal rifts, amid speculation over his 88-year-old father’s succession plans. James’s older brother Lachlan is still actively involved in the family businesses as the US-based chairman and chief executive of the slimmed-down Fox Corporation, which owns Fox News.

Last year, Rupert Murdoch told shareholders “there are no climate change deniers” around his company and said his business was early to commit to “science-based targets to limit climate change” and was working to reduce its climate emissions.

However, he has been publicly critical about the “alarmist” approach to the issue. In 2015, he used his Twitter account to describe himself as a “climate change sceptic not a denier”.

A climate change skeptic not a denier. Sept UN meets in NY with endless alarmist nonsense from u know whom! Pessimists always seen as sages

Lachlan Murdoch, Rupert Murdoch and News Corp have all separately donated millions of dollars to bushfire recovery efforts in recent days, although the Daily Beast claimed the donations were made after it requested comment about James Murdoch’s statement.

James Murdoch has a long history of advocacy on environmental issues, inviting the former US vice-president Al Gore to present a version of his An Inconvenient Truth slideshow to Fox executives in 2006. At the time he was the heir apparent to the media empire and had been trusted with running BSkyB in London, where he would push environmental issues to the fore, working on ways to reduce the power used by Sky’s set-top boxes and insisting on using hybrid taxis long before such things were standard corporate behaviour.

Since stepping back from day-to-day roles with the family business at the end of 2018, the multibillionaire has made clear he feels uncomfortable about much of Fox News’ output and was unsuccessful in an attempt to cash-in his stock completely and make a clean break with the company – an effort that failed after Lachlan declined to buy him out.

Kathryn Murdoch has already set out the couple’s vision, telling the New York Times last year that she was increasingly focused on the issue of global heating: “There hasn’t been a Republican answer on climate change. There’s just been denial and walking away from the problem. There needs to be one.”

She said she was particularly moved to act after seeing Al Gore’s speech at the Fox event in 2006: “I decided to switch everything I was doing. I wanted to be able to look my children in the eye and say ‘I did everything I could.’”