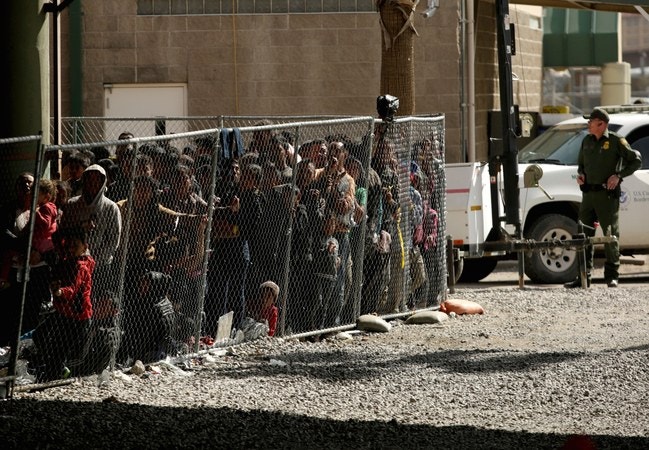 The debate over Alexandria Ocasio-Cortez’s use of the term “concentration camp” is not about language or facts. It is about how we perceive history, ourselves, and ourselves in history.
Photograph by Jose Luis Gonzalez / Reuters

Like many arguments, the fight over the term “concentration camp” is mostly an argument about something entirely different. It is not about terminology. Almost refreshingly, it is not an argument about facts. This argument is about imagination, and it may be a deeper, more important conversation than it seems.

“This administration has established concentration camps on the southern border of the United States for immigrants, where they are being brutalized with dehumanizing conditions and dying. This is not hyperbole. It is the conclusion of expert analysis.”

Hackles were immediately raised, tweets fired, and, less than an hour and a half later, Representative Liz Cheney, of Wyoming, tweeted, “Please @AOC do us all a favor and spend just a few minutes learning some actual history. 6 million Jews were exterminated in the Holocaust. You demean their memory and disgrace yourself with comments like this.” A high-pitched battle of tweets and op-eds took off down the much travelled dead-end road of arguments about historical analogies. These almost never go well, and they always devolve into a virtual shouting match if the Holocaust, the Nazis, or Adolf Hitler is invoked. One side always argues that nothing can be as bad as the Holocaust, therefore nothing can be compared to it; the other argues that the cautionary lesson of history can be learned only by acknowledging the similarities between now and then.

But the argument is really about how we perceive history, ourselves, and ourselves in history. We learn to think of history as something that has already happened, to other people. Our own moment, filled as it is with minutiae destined to be forgotten, always looks smaller in comparison. As for history, the greater the event, the more mythologized it becomes. Despite our best intentions, the myth becomes a caricature of sorts. Hitler, or Stalin, comes to look like a two-dimensional villain—someone whom contemporaries could not have seen as a human being. The Holocaust, or the Gulag, are such monstrous events that the very idea of rendering them in any sort of gray scale seems monstrous, too. This has the effect of making them, essentially, unimaginable. In crafting the story of something that should never have been allowed to happen, we forge the story of something that couldn’t possibly have happened. Or, to use a phrase only slightly out of context, something that can’t happen here.

A logical fallacy becomes inevitable. If this can’t happen, then the thing that is happening is not it. What we see in real life, or at least on television, can’t possibly be the same monstrous phenomenon that we have collectively decided is unimaginable. I have had many conversations about this in Russia. People who know Vladimir Putin and his inner circle have often told me that they are not the monsters that I and others have described. Yes, they have overseen assassinations, imprisonments, and wars, but they are not thoroughly terrible, my interlocutors have claimed—they are not like Stalin and his henchmen. In other words, they are not the monsters of our collective historical imagination. They are today’s flesh-and-blood monsters, and this makes them seem somehow less monstrous.

Anything that happens here and now is normalized, not solely through the moral failure of contemporaries but simply by virtue of actually existing. Allow me to illustrate. My oldest son, who spent his early childhood in a Russian hospital, was for many years extremely small for his age. I spent useless hours upon hours in my study in Moscow, where we then lived, poring over C.D.C. growth charts. No matter how many times I looked, I couldn’t place him—he was literally off the chart. As far as the C.D.C. was concerned, my son, at his age, height, and weight, was unimaginable. When he was four, I took him to see a pediatrician in Boston. She entered his measurements into her computer, and a red dot appeared on the chart. I felt my body finally relax; my child was no longer impossible! He was on the chart. Then I realized that the pediatrician was working with an interactive chart. (This was in the early aughts, and there weren’t any available to me at home.) She had just put him in the system. His little red dot was still below the lowest, fifth-percentile curve. He was still the smallest child of his age. But a sort of cognitive trick had been performed. My son’s size had been documented, and this made him possible.

Donald Trump has played this trick on Americans many times, beginning with his very election: first, he was impossible, and then he was President. Did that mean that the impossible had happened—an extremely hard concept to absorb—or did it mean that Trump was not the catastrophe so many of us had assumed he would be? A great many Americans chose to think that he had been secretly Presidential all along or was about to become Presidential; they chose to accept that, now that he was elected, his Presidency would become conceivable. The choice between these two positions is at the root of the argument between Ocasio-Cortez and the critics of her concentration-camp comment. It is not an argument about language.

Ocasio-Cortez and her opponents agree that the term “concentration camp” refers to something so horrible as to be unimaginable. (For this reason, mounting a defense of Ocasio-Cortez’s position by explaining that not all concentration camps were death camps misses the point.) It is the choice between thinking that whatever is happening in reality is, by definition, acceptable, and thinking that some actual events in our current reality are fundamentally incompatible with our concept of ourselves—not just as Americans but as human beings—and therefore unimaginable. The latter position is immeasurably more difficult to hold—not so much because it is contentious and politically risky, as attacks on Ocasio-Cortez continue to demonstrate, but because it is cognitively strenuous. It makes one’s brain implode. It will always be a minority position.

Masha Gessen, a staff writer at The New Yorker, is the author of ten books, including, most recently, The Future Is History: How Totalitarianism Reclaimed Russia, which won the National Book Award in 2017.