Trump’s “No-Peace/Peace Plan” for Palestine: Netanyahu/Gantz Invited to White House to Discuss “Deal of the Century” 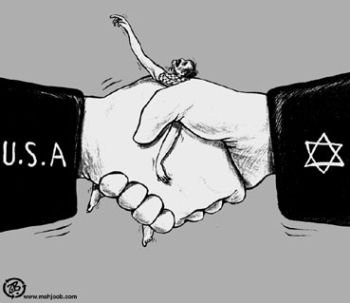 24 Jan 2020 – Leaked information shows Trump’s so-called deal of the century is a one-sided scam, favoring Israel at the expense of fundamental Palestinian rights.

The so-called peace process is the greatest hoax in modern times, along with the US war OF terror worldwide, not on it.

Israeli/Palestinian no-peace/peace plans have been around since the 1970s — a near-half century of failure to reach accommodation proof positive of US/Israeli unwillingness to respect Palestinian rights.

If both countries wanted conflict resolution resolution with Palestinians, it would have happened long ago.

His successors to the present day followed the same strategy.

Since Israel seized control of the West Bank, East Jerusalem and Gaza in 1967, colonizing and developing the most valued Palestinian land for exclusive Jewish use became official state policy — explained by Yigal Allon’s regional scheme, its elements including:

The above policies make peace, stability, equity and justice for Palestinians unattainable.

Achieving them defeats the US/Israeli agenda — dependent on endless regional conflicts and instability.

It’s why decades of peace plans when unveiled were dead on arrival, Trump’s let em eat cake deal of the century dead before arrival.

Partly introduced last June at a so-called “Peace to Prosperity Workshop” in Bahrain, the Trump regime’s dog and pony PR show was boycotted by Palestinians.

Deceptively billed as “a vision to empower the Palestinian people to build a prosperous and vibrant Palestinian society,” the economic plan has nothing to do with peace, equity and justice for long-suffering Palestinians — everything to do with one-sidedly serving US/Israeli interests.

The “Let Em Eat Cake” Deal of the Century: Trump’s “No Peace Deal Peace Plan” for Palestine and the Middle East

Trump and hardliners surrounding him are no friends of Palestinians or ordinary people anywhere, not at home or abroad.

Jerusalem is to remain undivided, the city “shared between Israel and New Palestine” — Israel maintaining exclusive control, the way it’s been for over half a century.

It declared actions taken by Israel “to change the physical character, demographic composition, institutional structure or status of the Palestinian and other Arab territories occupied since 1967, including Jerusalem, or any part thereof, have no legal validity…”

In July 2004,  the International Court of Justice (ICJ) ruled that “Israeli settlements in the Occupied Territory, including East Jerusalem, are illegal and an obstacle to peace and to economic and social development (and) have been established in breach of international law.”

Time and again, the US and Israel breach Security Council resolutions and other international laws.

Trump’s no-peace/peace plan is all about serving US and Israeli interests at the expense of regional peace, stability, and fundamental Palestinian rights.

According to Mike Pence on Thursday, Netanyahu and his chief political rival Benny Gantz will meet with Trump in the White House next week to discuss regional issues and what PA official Saeb Erekat called Trump’s “deal of the next century,” a conspiracy against Palestinian rights.

Reuters reported that the Trump regime will release his no-peace/peace plan ahead of the January 28 meeting with Netanyahu and Gantz.

It supports the illusion of Palestinian self-determination, demanding a demilitarized Hamas, along with Palestinian recognition of Israel as a Jewish state, Jerusalem its capital.

It also reportedly stipulates that if Palestinians reject the so-called plan, the Trump regime will support Israeli annexation of illegal settlements unilaterally.

According to the Wafa PA news site, Rudeineh said the following:

“If the announcement of this deal, with these unacceptable formulas, is made, the (PA) leadership will announce a series of measures to preserve our legitimate rights, and we will call on Israel to assume its responsibilities as an occupying power,” adding:

“We warn (the Netanyahu and Trump regimes) to not cross the red lines.”

Hamas spokesman Hazem Qassim said “any deal or project that does not contain our people’s full rights in our land and holy sites will not stand,” adding:

“All the attempts to make this deal come to pass will be squashed by our people’s resistance and steadfastness.”

“Our Palestinian people will determine its fate by way of its ongoing revolution, legitimate struggle and absolute belief in the justness of its cause.”

“Reports about details and timing of our closely-held peace plan are purely speculative.”

If its provisions resemble what’s discussed above, it’ll clearly be rejected by the PA, Hamas, and the Palestinian street.

Award-winning author Stephen Lendman lives in Chicago. He is a Research Associate of the Centre for Research on Globalization and his new book as editor and contributor is titled Flashpoint in Ukraine: US Drive for Hegemony Risks WW III. He can be reached at lendmanstephen@sbcglobal.net.