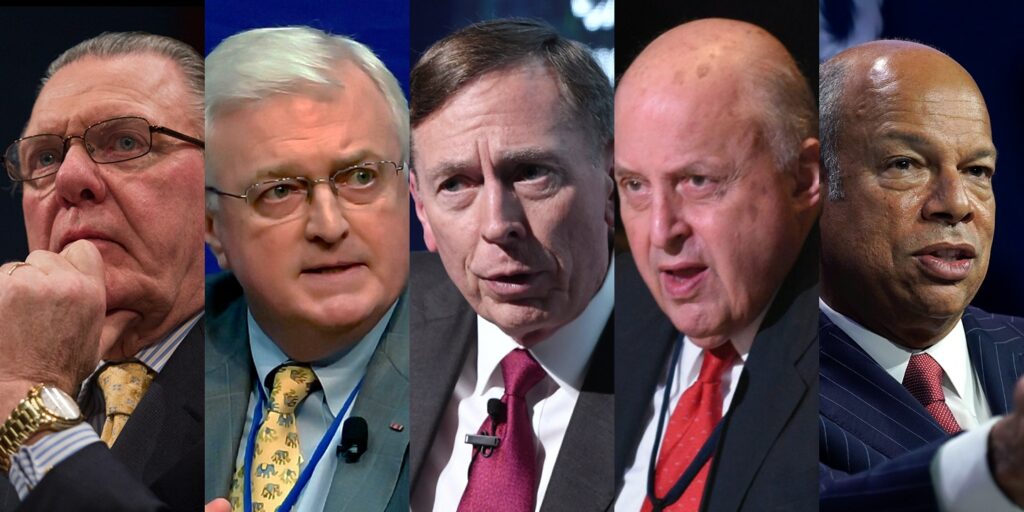 6 Jan 2020 – Since Friday [3 Jan], a loud chorus of voices has appeared in the media to celebrate President Donald Trump’s decision to assassinate Iranian Maj. Gen. Qassim Suleimani, a move that has sparked renewed tension in the Middle East, a new deployment of U.S. forces, and predictions of increased military spending.

Many of the pundits who appeared on national television or were quoted in major publications to praise the president’s actions have undisclosed ties to the defense industry — the only domestic industry that stands to gain from increased violence.

Jack Keane, a retired Army general, appeared on Fox News and NPR over the last three days to praise Trump for the strike on Suleimani. “The president acted responsibly,” Keane said during an appearance with Fox News host Lou Dobbs. “It should have happened a long time ago.” Keane has worked for military companies, including General Dynamics and Blackwater, and currently serves as a partner at SCP Partners, a venture capital firm that invests in defense contractors.

David Petraeus, the retired general who once commanded U.S. forces in Iraq and Afghanistan, was quoted by multiple outlets in support of the slaying. “This is a very significant effort to reestablish deterrence,” he told Foreign Policy. On Public Radio International, Petraeus declared that “this particular episode has been fairly impressively handled,” and praised the Trump administration for moving “to shore up our defenses and our offensive capabilities.” He also appeared on CBS’s “Face the Nation.”

Petraeus, notably, works for Kohlberg Kravis Roberts and Co., the investment firm with holdings in several major defense contractors that is reportedly moving to “build up its defense portfolio at a time when military budgets are skyrocketing.”

John Negroponte, a former State Department official who now serves as vice chair of the defense and aerospace lobbying firm McLarty Associates, appeared on Fox News to dispute the claim by Sen. Bernie Sanders, I-Vt., that the strike represented a threat of war. “I think it’s an act of self-defense,” countered Negroponte.

“General Suleimani,” Johnson said, “was a lawful military objective and the president, under his constitutional authority as commander in chief, had ample domestic legal authority to take him out without an additional congressional authorization.”

Johnson joined the board of directors of Lockheed Martin, one of the largest defense contractors in the world, in 2017. The part-time position pays him $310,000 a year in cash and stock awards, according to disclosures. None of the defense contracting ties were disclosed on air for Keane, Hipp, Negroponte, Petraeus, or Johnson.

“It is imperative that viewers are aware when their news commentary is coming from someone with a financial incentive tied to the topic they’re commenting on, especially when so many lives hang in the balance,” says Gin Armstrong, a senior researcher with the Public Accountability Initiative, which tracks conflicts of interest. “The key question is why media outlets allow anyone with a financial interest in war — regardless of their previous military or government experience — to have access to their platforms at a critical time like this.”

In the immediate aftermath of the assassination, stock prices for major defense contractors soared on the expectation of further conflict. The Trump administration has won more than $130 billion in additional Pentagon spending, but analysts expect a renewed push for even greater levels of weapons spending.

One key area for military growth in government defense spending could be the Overseas Contingency Operations fund, a special account used to fund wartime operations. The OCO had been largely frozen in place and expected to flatline in the 2021 budget. The escalation in response to the Suleimani killing could change that, according to the Cowen Group, an investment bank that specializes in servicing defense contractors.

The OCO account “was likely on a lower trajectory over the next several years. We doubt that’s the case now,” the Cowen Group’s Roman Schweizer wrote in a memo to investors on Friday. “The U.S. will likely increase deployments of forces to the region in coming weeks and could make additional strikes depending on Iran’s response.”

It’s not the first time defense contractor pundits have failed to disclose their vested stake in the military policies they advocate. The Boston Globe reported on how defense contractors routinely retain former high-level officers to serve as lobbyists, even though few bother registering or complying with ethics disclosures. Keane, for instance, was tapped by the contractor AM General to pressure lawmakers to support a plan to purchase new Humvee vehicles from the company rather than refurbish older models.

Former military leaders play a decisive role in shaping public opinion around military escalation. In the buildup to the Iraq War, the Pentagon maintained a secret effort to deploy former generals and other high-ranking officials on television news programs to drum up support for the invasion. The New York Times, which reported on the communications campaign, noted that the military pundits maintained financial ties to defense contractors, a financial stake in the war policies they sought to promote.