“I hope I can have the same drive as Pope Francis to fight for a better world,” Brazil’s ex-president said after meeting. 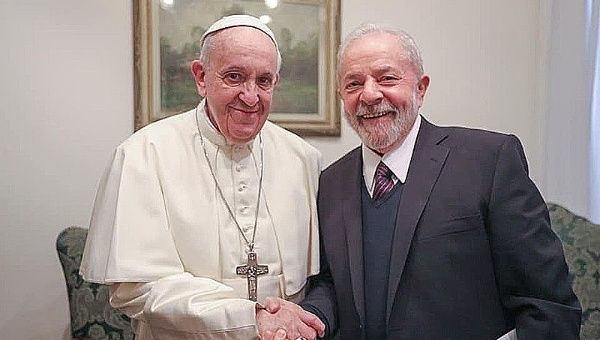 14 Feb 2020 – Increasing global inequality, environmental crisis, and forging solidarity-driven alternatives for the economy were some of the topics Brazil’s ex-President Luiz Inácio Lula da Silva and Pope Francis discussed on Thursday [13 Feb] at the Vatican.

After the meeting, Lula spoke with journalists about a meeting called by the pope with young people up to 35 years old to discuss alternatives for a new global economy.

“It’s a very invigorating decision by the pope, and it addresses a crucial issue for the future of workers around the world,” Lula said. The event will take place in Assisi, Italy between Mar. 26 and 28.

“I will fly back to Brazil hoping I can have the same drive as Pope Francis to fight for a better world,” the Brazilian ex-president said.

Lula mentioned that the Pope’s plan to encourage the youth to discuss the world’s economic problems could inspire unions, other churches, and political parties across the globe.

During the meeting, Lula said, they also talked about the rights workers fought for and secured in the 20th century, but which are now “being taken away by the greed of corporate and financial interests.”

“Everyone knows what happened to the world after the 2008 crisis and the New York stock market crash. I took part in many G20 meetings, from the first ones in Washington to the last one in Singapore. All decisions we would make were intended to prevent workers from being affected, so that there would be no protectionism, so that we could discuss developing poor countries, but none of that happened.”

Pope Francis and Lula discussed the environment as a top-priority issue, pointing out that there must be ways to transition to clean energy.

“Brazil is a privileged country, because our electric grid is 80 percent clean energy. Brazil has a lot of renewable energy. Brazil can generate a lot of power. And the world can too, with wind, photovoltaic, or solar energy,” Lula said.

“We notice that, despite speeches, government authorities are not willing or concerned about the environment. I just wanted to remind you all that a lot of people want to withdraw from the Kyoto Protocol,” he said.

In an exclusive interview for teleSUR, the former-president analyzed the reality that Brazil is experiencing and the social protests that have occurred in several Latin American countries