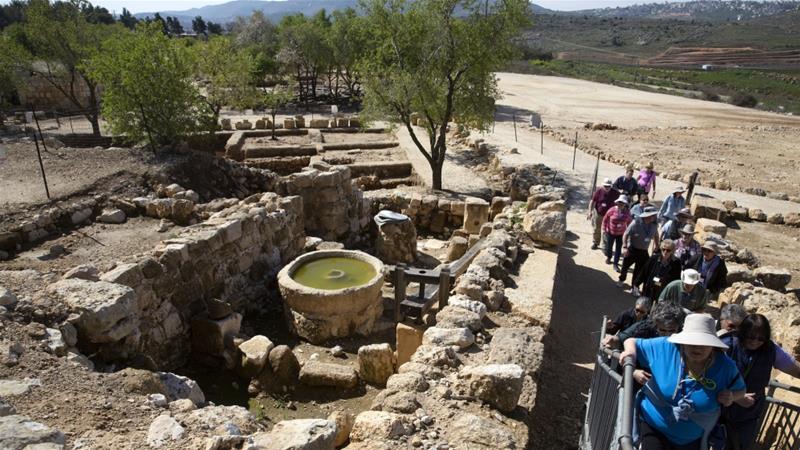 About 20 kilometres (12.4 miles) north of Ramallah in the occupied West Bank, just west of the Israeli settlement Shiloh, lies Tel Shiloh, an archaeological site that attracts tens of thousands of evangelical Christians every year.

There, Scott Stripling, an evangelical pastor from Texas, heads a dig in search of remnants of the biblical tabernacle – a portable dwelling containing a chest holding the two stone tablets of the Ten Commandments.

In a recent interview with the Times of Israel, Stripling says his latest find – three horns that may have adorned an altar – supports his claim that Tel Shiloh is the site of the dwelling.

The site and surrounding area already advance this perspective: The nearby settlement has a synagogue designed as a replica of the tabernacle, and while the site’s artefacts show a variety of Jewish, Christian, and Muslim groups residing in the area over a 3,700-year period, its attractions scarcely acknowledge anything outside the tabernacle story.

Stripling calls Tel Shiloh Israel’s “first capital”, based on the idea that Shiloh was the first capital of the Israelites for close to 400 years from the 15th century BCE. It is a claim Israel’s Prime Minister Benjamin Netanyahu also made on a visit to Tel Shiloh last year. He was accompanied by former Arkansas governor Mike Huckabee, who tweeted at the time: “Shiloh is proof from 3000 yrs ago this land was home to @Israel site of ancient Tabernacle.”

“Properly credentialed biblical scholarship does not assume the historicity of anything prior to King David [ca. 1010-970 BCE],” says Southern Methodist University Professor of Old Testament Susanne Scholz. “That Stripling projects the biblical stories into the historical record exposes him as a Christian fundamentalist. That’s the origin of his drive to do archaeology at Tel Shiloh.”

Scholz also points out that the claim that Shiloh was the capital of ancient Israel is “utter nonsense”.

“Such statements are used to advance geopolitical goals,” she says.

Indeed, as Christian Zionists, Stripling and Huckabee believe that the state of Israel is the result of biblical prophecy. The belief stems from the idea that four millennia ago God promised the land to the Jews, who will rule it until Jesus returns to Jerusalem for the rapture. While Christians will be saved upon Jesus’s return, those of other religions who do not convert to Christianity will be sent to hell.

About 80 percent of US evangelicals espouse Christian Zionist beliefs.

As a result of such beliefs, Christian Zionists support Israel’s illegal settlement enterprise in the West Bank and, indeed, any other policy – Israeli, US, or otherwise – that secures Israeli Jewish sovereignty over the land from the Mediterranean Sea to the Jordan River and even beyond, into Jordan’s East Bank. This makes Netanyahu’s annexation pledges and Donald Trump’s annexation-friendly “Peace to Prosperity” plan coveted moves. Christian Zionists generally ignore Israel’s violations of Palestinian rights, even of Christian Palestinians, or see them as a necessary means to an end.

Despite the matter of their supposed end-of-times demise according to this view, Jewish Israeli leaders have embraced the money and influence on US foreign policy that Christian Zionists offer, particularly with adherents Vice President Mike Pence and Secretary of State Mike Pompeo in the Trump administration and evangelicals constituting a large segment of Trump’s base (81 percent of white evangelicals voted for Trump in 2016).

The influence of Christian Zionists spurred the administration’s decision to move the US embassy from Tel Aviv to Jerusalem in 2018, helping to cement Israel’s claim to the city.

And while expanding settlements, home demolitions, and a host of other strategies have been means by which Israel has seized Palestinian territory and dispossessed Palestinians, so too has archaeology.

For decades, the Israeli government has used archaeology to, in the words of scholar Nadia Abu El-Haj, “create the fact of an ancient Israelite/Jewish nation and nation state,” shoring up the narrative of Jewish historical ties to the land while ignoring or glossing over other peoples who have inhabited the same space – and erasing Palestinian claims to and presence on the land.

Further, while biblical archaeology, the aim of which is to prove the validity of the Bible through tangible evidence, has been around for two centuries, the recent rise of Christian Zionism as a political force in the US and the movement’s cosy relationship with the Israeli government has made it all the more influential and pervasive.

Former Jerusalem Mayor Nir Barkat, for example, has proposed an economic plan to the Trump administration that includes the development of almost two dozen biblical sites, mainly in the Jordan Valley – an area both Netanyahu and his political rival Benny Gantz have promised to annex. Israeli Minister of Defence Naftali Bennet has similarly announced the creation of seven new nature reserves in the West Bank and the expansion of 12 existing reserves, including the archaeological site Qumran, where the Dead Sea Scrolls were discovered in the 1940s and 1950s.

Barkat names Tel Shiloh, which is managed not by Israel’s Nature and Parks Authority but by the council of the nearby settlement and a private nonprofit, as a model to be replicated across the West Bank. Thus a site explicitly run by and for the benefit of Israel’s settlement enterprise with the support and interest of Christian Zionists, some of whom travel thousands of miles and pay thousands of dollars to take part in Stripling’s dig, is touted as Israel’s ideal.

Barkat argues that the projects outlined in his plan, including the biblical sites, would provide Palestinians with jobs and higher wages than those they would make under the Palestinian Authority (PA). The opinion parallels the Trump administration’s perspective that Palestinians, if given economic incentives – termed “economic peace” – will happily abandon their decades-long struggle for self-determination, freedom, and rights for a better quality of daily life, a stance that many analysts critique.

Ali Abunimah, a cofounder of the Electronic Intifada and policy analyst with Al-Shabaka, The Palestinian Policy Network, told Al Jazeera the US economic plan is “an effort to buy Palestine for peanuts and give Palestinians nothing in exchange”.

It is indeed clear that such plans of so-called economic peace bolster Israel’s seizure and domination of Palestinian land and the delegitimisation of Palestinian rights. They also reinforce the Israeli government’s continued cynical ties with Christian Zionists. To be sure, the two ideologies – Zionism and Christian Zionism – reinforce one another and together impel a mutually beneficial, if brutal and illegal, system of Palestinian dispossession and oppression. That is, at least until the rapture.

One Response to “Christian Zionist Archaeology: A Tool of Palestinian Subjugation”