‘Deal of the Century’: America’s Most Generous Proposal to Israel 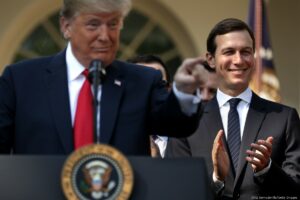 Senior Advisor to the President Jared Kushner (R) and US President Donald Trump at the White House in Washington DC, US on 1 October 2018.
[Chip Somodevilla/Getty Images]

29 Jan 2020 – Israeli President Donald Trump has revealed his long-awaited peace plan aiming, as he claims, to bring a “precise technical solutions” for the Palestinians and the Israeli and make the region “safer” and “much more prosperous.” He described his deal as a “win-win opportunity” for Israel and the Palestinians. Is this true? Let’s see!

According to Trump, the plan guarantees a Jewish identity for the state of Israel. This means that all the non-Jewish people in Israel (20 per cent of the Israeli population), including Muslims and Christians, will automatically be given the choice to become Jews or leave. These people are the Palestinians, who did not flee their homes in spite of the ethnic cleansing of 1948.

Regarding the Palestinians state, the plan ignores the international consensus on a two-state solution which gives the Palestinian a state on the 1967 borders with East Jerusalem as its capital. Trump’s plan “leaves Jerusalem in its entirety in the hands of Israel with the Palestinians given only symbolic access to the city.”

Meanwhile, the Palestinian state, according to Trump’s plan, would be created, after decades of useless negotiations, on separated areas, including the occupied Gaza Strip and parts of the occupied West Bank with a very “symbolic” part of Jerusalem as its capital. These non-contiguous areas would be connected to each other via tunnels or bridges. This state will have no control over its air, sea or crossings, and it would not be allowed to forge deals or alliances with other countries. It would have no army and must have all the Palestinian factions “demilitarised.”

READ: Palestinians should give up ‘fairy tales’, says Kushner

Under all of these humiliating conditions, Trump said: “Today’s agreement is a historic opportunity for the Palestinians to finally achieve an independent state of their very own. Palestinians will be able to seize the new future with dignity, self-sufficiency and national pride to ensure a successful Palestinian state.” The New York Times said: “President Trump’s proposal strongly favours Israel, though he insisted his plan would be good for the Palestinians.”

Most of the Jewish settlements, a major stumbling block in negotiations, would be annexed to Israel, according to Trump. All of this merely in exchange of an Israeli agreement on “a four-year freeze on new settlement activity while Palestinian statehood is negotiated.”

In a show of generosity, the deal would allow a symbolic number of refugees to return to the future Palestinian state. However, Netanyahu, who endorsed the deal, made it clear as he said that the Palestinian refugees would not have a right of return to Israel.

“I know that there will be opposition,” Ynet News reported Netanyahu as saying. “There is always opposition. I know there will be many obstacles along the way, much criticism. But we have an old Jewish saying: ‘If not now, when? And if not us, who?’”

The deal would see the end of the UN Agency for Palestine Refugees (UNRWA) as Trump clearly said it would “end the cycle of Palestinian dependence on charity,” referring to the UNRWA, which he has already stopped the annual American payment for it.

Israel celebrated the deal. The heads of the two main Israeli parties, Benjamin Netanyahu, the leader of the right-wing Likud, and Benny Gantz, the head of the centre-right Kaḥol Lavan, applauded the deal and thanked Trump for it.

“Today, Israel has taken a giant step toward peace,” Trump said at a White House. “Yesterday, Prime Minister Netanyahu informed me that he is willing to endorse the vision as the basis for direct negotiations – and, I will say, (opposition leader Benny Gantz) also endorsed and very strongly – with the Palestinians a historic breakthrough.” 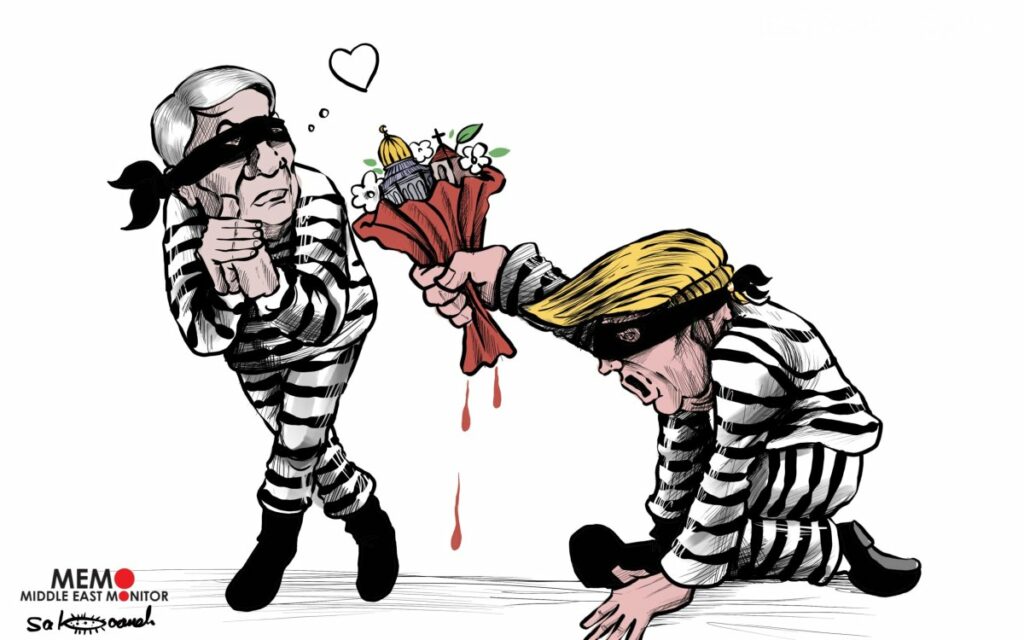 Netanyahu replied: “This is a historic day… On this day, you [Trump] became the first world leader to recognise Israel’s sovereignty over areas in Judea and Samaria [West Bank] that are vital to our security and central to our heritage.” He said that he is ready to start peace talks on the bases of Trump’s deal.

Benny Gantz said: “The president’s peace plan is a significant and historic milestone indeed. Immediately after the elections, I will work toward implementing it from within a stable, functioning Israeli government, in tandem with the other countries in our region.”

Trump said: “Forging peace between Israelis and Palestinians may be the most difficult challenge of all. All prior administrations have tried and bitterly failed, but I was not elected to do small things or shy away from big problems.” But he recognised: “We will be there every step of the way. It will work. If they do it, it will work.”

This deal is, in fact, unrealistic and the Palestinians, who did not accept better proposals since before the creation of the occupation state of Israel, will not accept it because they are the owners of the whole land. History, geography and politics are proofs for their ownership. However, Trump and the Israeli occupation will find some Palestinians who will either accept, remain silent or suppress any real action against it, but the majority of them will not accept it.

Regarding the Palestinian Authority, which has been it would not accept it and would act against it, all of this is nonsense because it is only speeches and remarks for mass media, while on the ground, it has been and still fighting anyone acting against it. If it is serious in its “heroic” remarks we are reading in the news, at least, it should accept unity calls with the other Palestinians factions ahead of taking joint actions on the ground.

Regarding the Arab nations, it is clear that they would do nothing more than encouraging it. Trump has said that Arab nations would pay for the economic side of his deal and he thanked three of the countries which dispatched representatives to celebrate the announcement of the deal in Washington. The Chief of the Arab League Ahmed Abul-Gheit commented on the deal: “Our response on the deal will keep up with the PA response.” It means they would accept or keep silent towards it.

The UN rejected the deal and insisted that the Israeli-Palestinian conflict should be resolved based on the Security Council and General Assembly resolutions. “The UN remains committed to supporting Palestinians and Israelis to resolve the conflict on the basis of UN resolutions, international law and bilateral agreements and realising the vision of two States – Israel and Palestine – living side by side in peace and security within recognised borders, on the basis of the pre-1967 lines,” spokesperson for the UN Secretary-General said in a statement, a copy of which sent to MEMO. But this remains nonsense as long as there is no real action to stop Israeli aggression and achieve the Palestinian gaols.

The UN has been doing this along with the age of the conflict but has never done anything. It could not maintain few numbers of an international peacekeeping mission in Hebron when Netanyahu pushed them out last year. What this ageing and paralysed body will do to the US and Israel more than condemnation?

The author is MEMO’s correspondent in the Gaza Strip.