Journalists Speak Up for Julian Assange

20 Feb 2020 – Julian Assange, founder and publisher of WikiLeaks, is currently detained in Belmarsh high-security prison in the United Kingdom and faces extradition to the United States and criminal prosecution under the Espionage Act. He risks up to 175 years imprisonment for his part in making public the leak of US military documents from Afghanistan and Iraq, and a trove of US State Department cables. The ‘War Diaries’ provided evidence that the US Government misled the public about activities in Afghanistan and Iraq and committed war crimes. WikiLeaks partnered with a wide range of media organizations worldwide that republished the War Diaries and embassy cables. The legal action underway against Mr Assange sets an extremely dangerous precedent for journalists, media organizations and the freedom of the press.

We, journalists and journalistic organizations around the globe, express our grave concern for Mr Assange’s wellbeing, for his continued detention and for the draconian espionage charges.

This case stands at the heart of the principle of free speech. If the US government can prosecute Mr Assange for publishing classified documents, it may clear the way for governments to prosecute journalists anywhere, an alarming precedent for freedom of the press worldwide. Also, the use of espionage charges against people publishing materials provided by whistleblowers is a first and should alarm every journalist and publisher.

In a democracy, journalists can reveal war crimes and cases of torture and abuse without having to go to jail. It is the very role of the press in a democracy. If governments can use espionage laws against journalists and publishers, they are deprived of their most important and traditional defense – of acting in the public interest – which does not apply under the Espionage Act.

Prior to being moved to Belmarsh prison, Mr Assange spent more than a year under house arrest and then seven years inside the Ecuadorian embassy in London, where he had been granted political asylum. Throughout this time he was subjected to serious violations of his human rights, including having his legally privileged conversations spied on by organizations taking direct instruction from US agencies. Journalists visiting were subjected to pervasive surveillance. He had restricted access to legal defense and medical care and was deprived of exposure to sunlight and exercise. In April 2019, the Moreno government allowed UK law enforcement officers to enter the Ecuador embassy and seize Mr Assange. Since then he has been held in solitary confinement for up to 23 hours a day and, according to visitors, is “heavily medicated”. His physical and mental health have seriously deteriorated.

As early as 2015 the United Nations Working Group on Arbitrary Detention (WGAD) determined that Mr Assange was arbitrarily detained and deprived of his liberty, and called for him to be released and paid compensation. In May 2019, the WGAD reiterated its concerns and request for his personal liberty to be restored.

We hold the governments of the United States of America, the United Kingdom, Ecuador and Sweden accountable for the human rights violations to which Mr Assange has been subjected.

Julian Assange has made an outstanding contribution to public interest journalism, transparency and government accountability around the world. He is being singled out and prosecuted for publishing information that should never have been withheld from the public. His work has been recognized by the Walkley Award for Most Outstanding Contribution to Journalism in 2011, the Martha Gellhorn Prize for Journalism, the Index on Censorship prize, the Economist’s New Media Award, the Amnesty International New Media Award, the 2019 Gavin MacFadyen Award and many others. WikiLeaks has also been nominated for the UN Mandela Prize in 2015 and for the Nobel Peace Prize seven times (2010-2015, 2019).

Mr Assange’s reporting of abuses and crimes is of historic importance, as have been the contributions by whistleblowers Edward Snowden, Chelsea Manning and Reality Winner, who are now in exile or incarcerated. They have all faced relentless smear campaigns waged by their opponents, campaigns that have often led to erroneous media reports and a lack of scrutiny and media coverage of their predicaments. The systematic abuse of Mr Assange’s rights for the past nine years has been understood and protested by the Committee to Protect Journalists, the International Federation of Journalists and leading human rights organisations. But in public discussion there has been an insidious normalising of how he has been treated.

“it finally dawned on me that I had been blinded by propaganda, and that Assange had been systematically slandered to divert attention from the crimes he exposed. Once he had been dehumanized through isolation, ridicule and shame, just like the witches we used to burn at the stake, it was easy to deprive him of his most fundamental rights without provoking public outrage worldwide. And thus, a legal precedent is being set, through the backdoor of our own complacency, which in the future can and will be applied just as well to disclosures by The Guardian, the New York Times and ABC News”.

“By displaying an attitude of complacency at best, and of complicity at worst, Sweden, Ecuador, UK and US governments have created an atmosphere of impunity encouraging Mr Assange’s uninhibited vilification and abuse. In 20 years of work with victims of war, violence and political persecution I have never seen a group of democratic States ganging up to deliberately isolate, demonize and abuse a single individual for such a long time and with so little regard for human dignity and the rule of law.”

In November 2019, Melzer recommended that Mr Assange’s extradition to US be barred and that he be promptly released. “He continues to be detained under oppressive conditions of isolation and surveillance, not justified by his detention status (…) Mr Assange’s continued exposure to arbitrariness and abuse may soon end up costing his life”, said Melzer.

In 1898, French writer Émile Zola wrote the open letter J’accuse…! (I accuse) to warn about the wrongful sentencing to life in prison of a military officer named Alfred Dreyfus on espionage charges. Zola’s stance entered history books and still today stands for our duty to fight miscarriages of justice and to hold the powerful to account. This duty is as necessary as ever today, when Julian Assange is being victimized by governments and faces 17 charges[1] under the US Espionage Act, legislation that also dates back over hundred years.

As journalists and journalists’ organizations that believe in human rights, freedom of information and of the public’s right to know, we demand the immediate release of Julian Assange.

We urge our governments, all national and international agencies and fellow journalists to call for an end to the legal campaign being waged against him for the crime of revealing war crimes.

We urge our fellow journalists to inform the public accurately about this abuse of fundamental rights.

We urge all journalists to speak up in defense of Julian Assange at this critical time.

[1]    There is a further charge under different legislation, making a total of 18 charges.

(Only journalists, organizations and people in journalism-related roles – columnists/commentators, editors, photographers, cameramen and camerawomen, media producers and publishers, documentary filmmakers, whistleblowers, journalism professors/trainers or academics researching journalism and media, representatives of journalism organizations including journalists’ trade unions, and NGOs which defend press freedom, and work in defence of whistleblowers, digital rights and transparency and similar roles – are eligible to sign.) 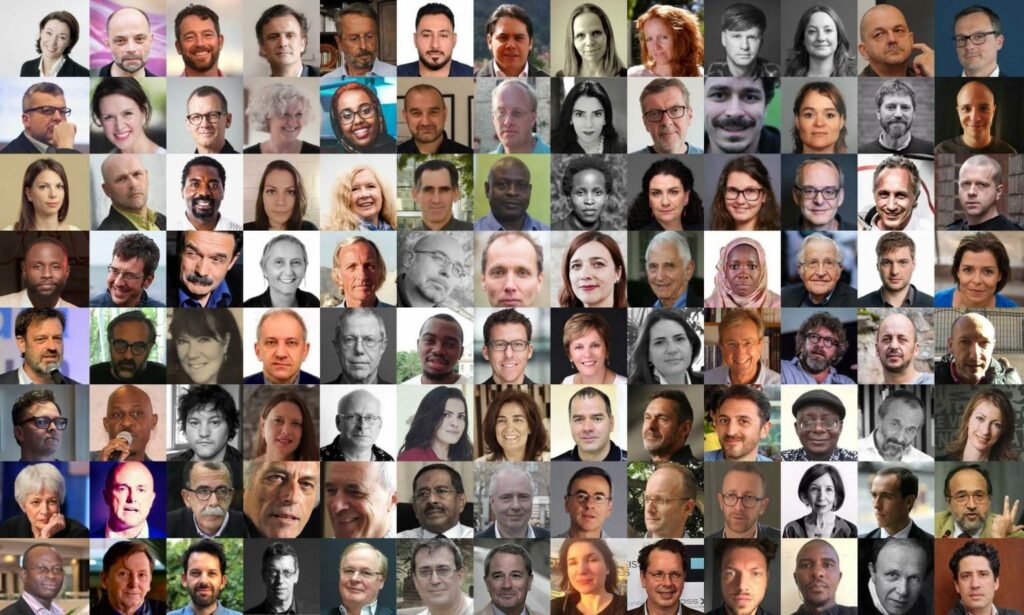