Private Equity Firm to Purchase the Assets of the .ORG Domain Registry for $1 Billion

27 Jan 2020 – A public demonstration took place on Friday [24 Jan] morning in front of the offices of the Internet Corporation for Assigned Names and Numbers (ICANN) in Los Angeles to demand a halt to the sale of the .ORG domain registry to the private equity firm Ethos Capital for $1.135 billion.

The “SaveDotOrg” protest was organized by a coalition of technology industry organizations and nonprofits that oppose the sale of the .ORG domain because it “could impact millions of individuals and organizations who have a .ORG website, opening the door to potential censorship and price increases on domain registration and renewals.” 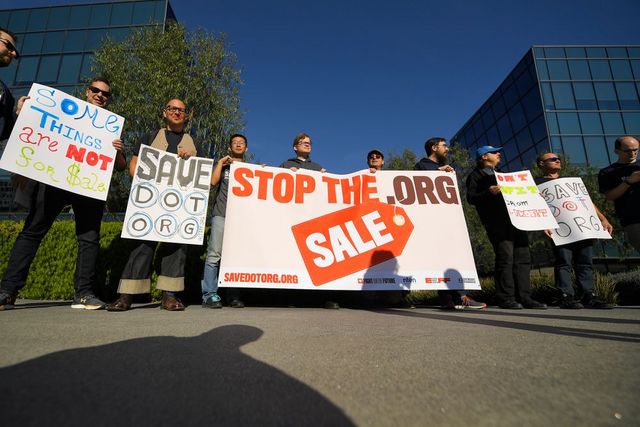 Protesters outside of the office of ICANN in Los Angeles on 24 Jan 2020
(Photo credit-thepublicsradio.com)

The conversion of .ORG into a for-profit enterprise is by definition an attack on public access to news, information and digital media. Among the threats it poses to the nonprofits and other organizations using the .ORG domain are higher domain registration fees, censorship-for-hire schemes, selling browsing data and diminished technical maintenance and support.

As of this writing, 660 organizations, 21,000 people and six members of Congress have endorsed a letter from the Electronic Frontier Foundation (EFF) that ICANN—the nonprofit umbrella organization responsible for the internet’s domain name system—stop the planned sale of the .ORG domain by the Public Interest Registry (PIR).

The letter is addressed to Andrew Sullivan, President and CEO of the Internet Society and says, “Non-governmental organizations all over the world rely on the .ORG top-level domain. Decisions affecting .ORG must be made with the consultation of the NGO community, overseen by a trusted community leader. If the Internet Society (ISOC) can no longer be that leader, it should work with the NGO community and the Internet Corporation for Assigned Names and Numbers (ICANN) to find an appropriate replacement.”

PIR, also a non-profit organization, was created by the Internet Society in 2002 to manage the .ORG registry. As of 2015, there were 10.5 million domains registered with the .ORG designation. According to surveys of consumers, the public perceives .ORG websites to be more trustworthy and “Respondents were more likely to turn to .ORG websites in a crisis, more likely to post content on .ORG sites and to trust information on a .ORG domain.”

In response to the growing opposition, PIR announced on January 17 that the 30-day review period had been extended to February 17 to allow for “additional information” to be provided “so that ICANN has a full understanding of the Transaction.” However, the PIR statement says that “ICANN is not providing or withholding its consent at this time.”

The .ORG registry is what is known as a top-level internet domain. It is one of seven such domains—the others being .com, .gov, .edu, .mil, .arpa, and .net—that were established in 1985. The domain name system (DNS) was created by internet pioneers to make it easier for users to remember the location of computers on the network. Instead of memorizing their all-numeric IP addresses, users were able to type the second-level domain (WSWS) followed by its top level (.ORG) domain to find the desired resource on the internet.

The sale of the top-level domain was originally announced on November 13. In a press release, the ISOC and PIR said the terms of the deal involve the acquisition of “PIR and all of its assets from the Internet Society” by Ethos Capital. Andrew Sullivan is quoted in the statement saying, “This transaction will provide the Internet Society with an endowment of sustainable funding and the resources to advance our mission on a broader scale as we continue our work to make the Internet more open, accessible and secure—for everyone.”

It is significant that the Internet Society, a nonprofit organization and user of the .ORG domain itself, which was founded in 1992 to provide leadership and establish standards for the functioning of the world’s critical information infrastructure, is now compelled to sell off a significant asset in order to “sustain funding” and “make the Internet more open, accessible and secure.”

A group of 11 executives of major international NGOs—including Greenpeace, Human Rights Watch, Amnesty International and the American Civil Liberties Union (ACLU)—issued an open letter to ISOC and ICANN from the World Economic Forum in Davos last Wednesday opposing the sale.

Anthony D. Romero, executive director of the ACLU said, “Free expression around the world is increasingly endangered by government and corporate players, which is why we are joining other civil society organizations in making public our concerns over the .org sale. The internet is crucial to the integrity of civil liberties and human rights work, and also the safety of those doing it. The security of civil society should not be entrusted to private equity.”

Ethos Capital was founded in 2019 and appears to have been created for the purpose of purchasing the .ORG registry. The firm’s CEO Erik Brooks, a well-connected Harvard MBA, specializes in “companies in which technology can be used to automate, optimize and transform traditional business models into faster growing, more efficient organizations.”

The purpose of selling to private equity is obviously to transform the previously non-profit PIR into a for-profit organization with investors of the $1 billion expecting a return on their money. When asked who the investors are, Ethos Capital said, “this is a US-based private transaction in which investors and corporate directors have a right to privacy.”

The justifications provided by Sullivan, the Internet Society and his investors for selling are based largely on the fait accompli of the internet’s transformation from an open public resource into a structure dominated by the Silicon Valley tech monopolies.

In response to the mounting criticisms, Nora Abusitta-Ouri, Chief Purpose Officer of Ethos Capital wrote on Wednesday, “nonprofits rely on for-profit businesses every day to achieve their online goals—from registrars to web designers, to Internet providers, to hosting services, and beyond. The Internet was built by for-profit companies with the resources and capabilities to innovate, and we want to make sure that the registrants of .ORG, like every other domain in the world, have the benefit of being served by a company with the ability, desire and resources to innovate and compete on a global scale.”

The concerns of the opponents of the hiving off of .ORG to private equity investment vultures are legitimate. Promises by Ethos Capital that it will keep increases in domain registration fees to 10 percent cannot be trusted. Additionally, there will be pressure to monetize the .ORG assets by collecting browsing activity and tracking visitor demographics, and offering this data up to marketers for lucrative fees. There is nothing to stop the firm from turning this data over to the surveillance state.

It should be expected that the private owners—beholden to powerful financial and political interests—will use their control of the top-level domain for online censorship of websites that are considered objectionable by their stakeholders on Wall Street and in Washington DC.

The backdrop to the .ORG transaction is the ongoing vendetta against WikiLeaks.org and its founder and editor Julian Assange. Assange is currently being held illegally in a London prison, facing proceedings for his extradition to the US on charges of violating the Espionage Act of 1917, for publishing the truth about the crimes of imperialist states and corporations against the public.

Meanwhile, many political parties and organizations—including the World Socialist Web Site and the Socialist Equality Parties throughout the world—use the .ORG domain for their online presence. It can be expected that private control will lead to arbitrary suspensions of domain registration and targeting left-wing and socialist political opponents and critics of corporate and state policy.

As was the case when net neutrality was officially abolished by the FCC in June 2018, the growing public opposition to the privatization of yet another resource of the internet will be run roughshod over. Appeals to the executives of the organizations making the decision to sell the .ORG asset will not stop the process from moving forward and being completed.

The defense of an open internet and its maintenance as a public utility that is available to all requires a mass political struggle against the capitalist system. Only the independent mobilization of the working class—including workers in the internet and tech industries—on the basis of a socialist and internationalist program, can prevent the further conversion of the information infrastructure into private property that is integrated with the police and military-intelligence apparatus.