Climate Change and the Sinking Island States in the Pacific 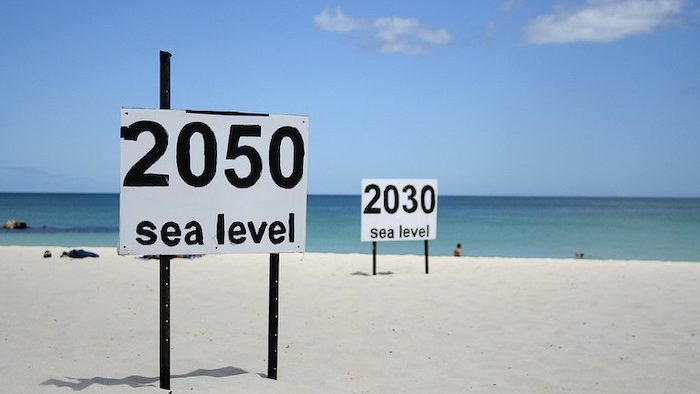 9 Jan 2020 – Climate change is one of the most pressing political, economic and environmental issues of our time. It demands honest and timely collective global actions. Despite the ever-rising environmental catastrophes that are occurring around the world from destructive hurricanes, cyclones and flooding to sea level rise, coastal erosion, drought, fire, and sea acidification, there are climate change deniers who argue that climate change is not posing the kind of danger that is being put forward. Yet, if the global community does not take drastic measures now, climate change could result in many of the Pacific island nations being wiped from the map of the world in the not so distant future. The small island nations of the Pacific region are more vulnerable to the acute effects of climate change than any other region in the world. Most of these volcanic islands are barely a few metres above sea level (ADB, 2019). Ocean level rise amongst other climatic changes is threatening the very existence of these geographically isolated and small land masses. ‘The rising scale and the intensity of storm surges, saltwater intrusion and coastal destruction of the past decades have decimated coping capacities, leaving island populations with failing crops, crippling water shortages and an uncertain future’ (Hassan and Cliff, 2019). The existential threat of environmental change is irrefutably claiming land and human lives year-in and year-out.

Furthermore, for many Pacific Island states, ‘the current forecasts for rising sea levels due to climate change will severely impact their territory’ (Wyeth, 2017). Countries such as Tuvalu, Kiribati and the Marshal Islands are already experiencing sea level rise where ocean flooding has washed saltwater onto agricultural lands and inundated sources of drinking water. These low-lying islands do not have forest cover therefore ocean level is rising at a much faster rate (Goulding, 2015). Realizing the severity and destructive nature of climate change, the Pacific island states have been vocal advocates for reduction of greenhouse gas emissions and active supporters of the Paris Agreement. ‘Pacific leaders are increasingly placing a strong emphasis on Pacific coalitions or political groupings as a means to accentuate a pacific voice in the climate change regime at the global level’ (Carter, 2015, p. 206).

For Pacific islanders both land and ocean have a huge economic, political and cultural significance. The region has an ‘ocean-based economy focused on maritime transportation and shipping, fisheries, extractive industries and prospecting for oil and gas as well as tourism’ (Coelho, 2019). In 2016 alone, the revenue generated through fishing licensing stood at US$474 million, which ever since has been growing steadily. Tourism industry, where the tourists flock to these unspoilt natural beauties of the islands, generates up to 70 per cent of any Pacific country’s gross domestic product (GDP). Agriculture is the other vitally important sector that generates wealth and employment to the rural population. Climate change and severe weather events severely impact all these sectors and leave behind destitute populations and aid-dependent countries. It is now scientifically proven that climate change is contributing to an ‘increase in sea temperature, as a large share of excess heat from greenhouse gas emissions is absorbed by the ocean… [making it] acidic and is losing oxygen” (Coelho, 2019).

This will result in rapid decline of fish stock amongst others. Moreover, climate change will also affect food security, water, health, livelihood and make these island nations uninhabitable, which then result in a huge body of climate refugees with no place to seek shelter. Kiribati and Tuvalu have already purchased land in Fiji to relocate their endangered population. In Fiji more than 40 low-lying communities are earmarked to be relocated to upper ground because of rapid sea level rise (McNamara and Des Combes, 2015) Although relocation is considered as an effective adaptation mechanism, experts argue this is not a long-term solution to the problem.

Bearing these environmental crises in mind, time is not on the Pacific region’s side. ‘If global emissions are not drastically reduced, thousands of low-lying atolls may become uninhabitable within decades’ (Cassella, 2019). The entire Pacific region contributes to 0.03 per cent of total greenhouse gas emissions. Yet millions of Pacific islanders are subjected to bearing the severe impact of climate change, which is undeniably an existential threat to their ‘homeland, culture, livelihoods’ and their Pacific identity. Sinking of low-lying areas has become a stark reminder and potent symbol of climate change. Most research ‘predict these low-lying islands will be submerged by the end of the century [and] some islands might run out of freshwater long before they run out of land’ (Cassella, 2019). It is therefore about time that the global community takes action now and makes committed binding decisions to combat climate change before it is too late and coastal areas start disappearing one after the other.

Combating environmental crisis is not the work of one government or international organisation alone. It requires collective action by diverse groups such as governments, multilateral organisations, multinational corporations and the general public. Mike Hulme (2009:310) a lead author on the Intergovernmental Panel on Climate Change (IPCC) Third Assessment Report in 2001, recently claimed that climate change is a ‘crisis of governance… [not] a crisis of the environment or a failure of the market’ (quoted in Evans, 2012, p. 2). This crisis of governance has been exacerbated by the US government’s decision to pull out of the Paris Agreement. In the Paris Agreement, held around four years ago, global leaders agreed to ‘make efforts to restrict the rise in global temperatures to well below 2 degree Celsius above pre-industrial levels and, if possible, reach 1.5 degrees Celsius’ (UN, 2019). This US decision has not only caused trepidation and concern in the wider Pacific region, but also feeling of helplessness and disappointment.

The US, China and India are some of the biggest polluters in the world. If these nations do not commit themselves to climate change and cut their carbon emissions to the atmosphere, the lesser polluters will justify their polluting actions and continue with the business as usual. For example, the Pacific leaders have time and again appealed to Australia ‘to do everything possible to achieve a rapid transition from coal to energy sources that do not contribute to climate change.’ However, as coal is at the heart of Australia’s ‘economic growth’ the current government has not taken any tangible actions to reduce coal emissions. This clearly indicates that there is a crisis of governance and absence of global governance to monitor state behaviour and regulate climate change in order to attain an effective outcome. It is now strongly believed that ‘climate change is no longer primarily a scientific or technological challenge, but a political, social and economic one’ (Evans, 2012, p. 4). Unless the global community establishes a strong political will with a strong leadership, environmental crisis will remain unaddressed.

The Pacific region will continue to bear the brunt of extreme impact of climate change. As recent as 28 December 2019, Tropical Cyclone Sarai caused huge amount of human and material losses in Fiji despite the fact that it did not make full landfall in the island nation. Sarai claimed two human lives and made more than 2500 people homeless. It damaged houses, destroyed crops, cut trees and toppled electricity pylons (ABC, 2019). And there are more to come. According to the Regional Specialised Meteorological Centre Nadi Tropical Cyclone Centre Area of Responsibility, there are expected to be five to eight Tropical Cyclones in the region during the 2019-20 season. The Centre which is the official source of Tropical Cyclones occurring in the South West Pacific Ocean, predicts that two to four Tropical Cyclones may reach severe Tropical Cyclone intensity (Category three status or above) during this season. (Fiji Meteorological Service, 2019).

Every year the region as a whole suffers from weather events of different magnitude. Ever since the Paris Agreement in 2015, the island nations in the Pacific have taken bold steps to cut their greenhouse gas emissions and ‘increase their resilience to climate impacts.’ However, given that the percentage of their emissions is markedly small; their ‘going green’ actions may not effectively address climate change unless the big global polluters come on board and take similar bold green steps to address environmental crises. The onus is now on the international community to take bold steps and combat climate change. There are states such Australia, which is suffering and experiencing climate change, yet continues to use coal as a source of fuel to run the engine of its economy. Not to mention that the country is facing with water shortage as well as successive droughts and overwhelming fires. It is therefore just the latest in a series of lessons to climate change deniers that this phenomenon is irrefutably real, and the global community must take action now before it is too late.