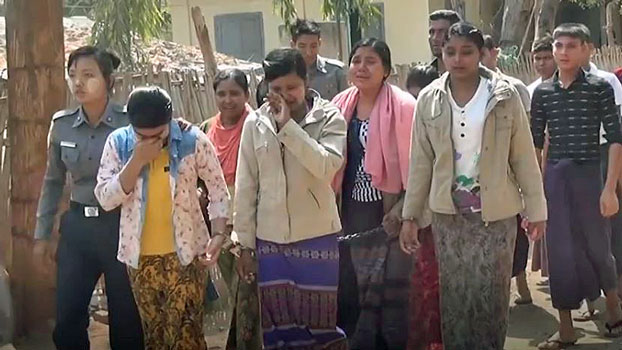 6 Mar 2020 – A court in central Myanmar’s Magway region today sentenced 15 Rohingya Muslims to a maximum of two years in prison each for attempting to leave the country illegally, an immigration official said.

Authorities in Minhla township arrested the 15 adults and one child for traveling without official proof of identity or travel documents on Feb. 14.

Eight men and seven women were sentenced at the township courthouse under Section 6(3) of Myanmar’s Immigration Act and immediately transferred to Thayet Prison, while the six-year-old was sent to the Magway Child Care Center run by the region’s social welfare department.

“Their sentence came fast because they traveled without any proof of identity or travel documents,” said Minhla township immigration officer Aung Pyi Soe who testified at the hearings. “We didn’t need much evidence to convict them.”

But because of restrictions on their freedom of movement, the Rohingya cannot freely travel inside or outside Myanmar without first obtaining official permission. Those who decide to travel illegally usually do not take identification cards with them, which all Myanmar residents must carry.

More than 200 Rohingya have been charged under the same act during the past three years, he added.

About 70 other Rohingya adults who also tried to illegally flee Myanmar but were arrested on Feb. 20-21 appeared Friday at the courthouse in Yangon region’s Hlegu township amid their ongoing trial.

The group consists of 67 adults and three children under 10 years of age. They are on trial for violating Myanmar’s nationality statutes for traveling illegally and without documentation.

“The Immigration Department filed a case against them under the Immigration Act,” said Maung Maung Oo, head of the police Station. “We were with immigration officers when we arrested these Rohingya. That’s why I am here as a witness.”

Authorities apprehended the Rohingya, who hail from Rakhine’s Kyautphyu, Sittwe, Minbya, and Buthidaung townships, as they were heading to Malaysia with the help of human traffickers.

One of those charged said the group left to escape travel restrictions imposed on them and to find work.

“We cannot travel and don’t have jobs in Rakhine,” said the Rohingya who did not provide a name. “We find it difficult to survive. That’s why we fled from our homes.”

Attorney Thazin Myat Myat Win, who is defending the Rohingya, said that traffickers told the members of the group that they would help them get jobs in Malaysia.

“Some kids said that the traffickers told the Rohingya who couldn’t pay them before leaving that they could pay them after they got jobs in Malaysia,” Thazin Myat Myat Win said.

Rohingya activist Thar Aye said the Rohingya did not deserve to be sentenced.

“Although they don’t have proof of identity to travel in the country, the sure thing is they are not foreigners,” he said. “Instead of giving them jail sentences, authorities should send them back to their places of origin.”

Thousands of Rohingya have tried to leave Myanmar in the last several years to escape institutionalized persecution, grinding poverty, and insecurity in Rakhine state.

They have paid human traffickers hundreds of dollars or more each to transport them to other Muslim-friendly nations in Southeast Asia where they hoped to have a better life.

Myanmar authorities have apprehended more than 2,200 Rohingya Muslims as they attempted to illegally leave the country by sea since 2015, according to a list of the detainees obtained from a naval officer by RFA’s Myanmar Service in February.

Nearly 1,500 Rohingya were detained in 2015, more than 500 were picked up in 2018, and roughly 250 have been apprehended so far in 2019, according to the list provided by the officer, who declined to be named because he is not authorized to give information to the media.

The figures do not include Rohingya who fled by land from two brutal military-led crackdowns in northern Rakhine state in 2016 and 2017.

During the first round of violence, about 90,000 Muslims left and headed across the border and into Bangladesh, while the second more brutal clampdown forced more than 740,000 out of their villages and into Myanmar’s neighboring country.

Of the estimated 600,000 Rohingya still living in Rakhine state, about 120,000 reside in internally displaced persons camps where they were sent to live following communal violence with ethnic Rakhine Buddhists in 2012.

Those living in refugee camps in Bangladesh have refused to return to Myanmar despite a repatriation agreement signed in November 2017 that lets approved Muslims voluntarily return to Rakhine state. They fear reprisals of targeted violence and continued repression and discrimination if they return.

Myanmar, which has denied that its soldiers committed widespread atrocities against the Rohingya, now faces legal action against it on genocide-related charges at three courts — the International Court of Justice (ICJ), the International Criminal Court, and an Argentine court.

The ICJ in January ordered the country to protect the Rohingya from further harm and genocidal acts and to refrain from destroying evidence of alleged crimes that could be used in later hearings.

On Tuesday, the U.N. refugee agency (UNHCR), International Organization for Migration, and other NGOs issued an appeal for U.S. $877 million in humanitarian assistance for the hundreds of thousands of Rohingya refugees in Bangladesh.

The funds will be used “to respond to the needs of approximately 855,000 Rohingya refugees from Myanmar and over 444,000 vulnerable Bangladeshis in the communities generously hosting them,” the UNHCR said in a statement.

In response to the call, the U.S. State Department on the same day announced more than $59 million in additional humanitarian assistance for Rohingya refugees and host communities in Bangladesh and for internally displaced Rohingya and members of other affected communities in Myanmar.

The U.S. has now contributed a total of nearly U.S. $820 million in humanitarian assistance for the Rohingya crisis since the August 2017 crackdown. Of this funding, almost U.S. $693 million has been earmarked for programs inside Bangladesh.

“We continue to call on Burma to create the conditions that would allow for voluntary, safe, dignified, and sustainable returns, based on the informed consent of those who have been forcibly displaced,” the statement said.

“We also call on the government of Burma to ensure unhindered and sustained humanitarian access to all people requiring assistance,” it said.

Translated by Khet Mar. Written in English by Roseanne Gerin.