An Extremely Normal Weekend of Pestilence, Locusts, a Fire in Chernobyl, and a Volcano 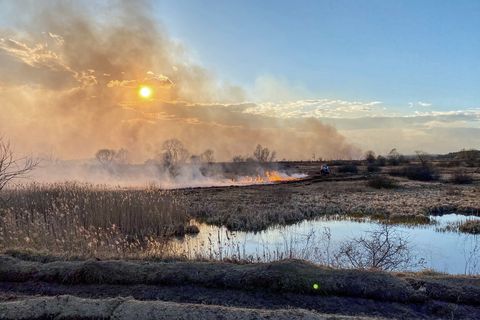 13 Apr 2020 – Every Friday, when we shutter the shebeen for the weekend, I sign off the last post of the week with some variation of, “I’ll be back on Monday with whatever happened over the weekend, wha-dee-doo-dah.” Between the worldwide pandemic, and the wildfire epidemic of the Republican prion disease within our government, this has become a full-time Monday gig. So here’s a sampling from around the world that gives substance to my now-regular reaction to any news at all—“Oh, come the fck on!”

Item: Chernobyl is burning down. From the New York Times:

Radiation readings near the wildfires, where smoke is swirling about, have been elevated, with the wind blowing toward rural areas of Russia and Belarus for most of the past week. The wind shifted Friday toward Kyiv, the Ukrainian capital, but authorities say the radiation level is still normal in the city, whose population is about three million. But Saturday’s strong winds could spread the fires to the remnants of the nuclear plant and the equipment that was used to clean up the disaster, said Kateryna Pavlova, the acting head of the agency that oversees the area, in a telephone interview. “At the moment, we cannot say the fire is contained,” Ms. Pavlova said.

In addition to keeping an eye on this story because clouds of radioactive smoke and ash are spiraling into the atmosphere, we also should keep an eye on this because the Soviet response to the original reactor calamity seems to be the template for Camp Runamuck’s response to the pandemic here—fudge, deny, and lie. There’s no reason to believe that this Ukrainian government will react any differently just as there was no reason to believe the happy-talk numbers about COVID-19 infections that the Russian government was putting out. These lies seem to be crumbling under the weight of the pandemic.

The agency said that the volcano was continuously erupting until Saturday morning. A level 2 alert status remained in place, the second-highest on a scale of four. There were no casualties reported. The 2018 eruption caused a tsunami along the coasts of Sumatra and Java, killing 430 people. Anak Krakatau, which means Child of Kratakau, is the offspring of the famous Krakatau volcano, whose monumental eruption in 1883 triggered a period of global cooling.

Item: Hurrah! It’s the second millennium BCE! From the AP:

There really is something deeply atavistic about what we’re all going through. Pestilence, disease, and locusts, all at the same time. I wake up every morning expecting to see a golden calf on my front lawn.