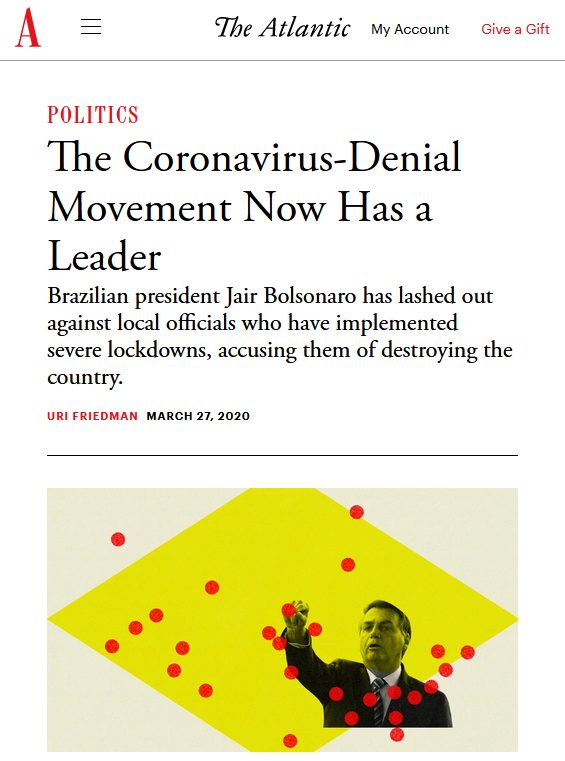 The Atlantic (3/27/20) argues that compared to Jair Bolsonaro on the coronavirus, “Donald Trump’s approach looks sober and scientifically grounded.”

12 Apr 2020 –Far-right Brazilian President Jair Bolsonaro—already a media fixture for his propensity to say horrible things on Twitter—has over the past few weeks become one of the most ridiculed leaders in the world due to his handling of the coronavirus crisis. While it is true that he is a controversial and widely disliked leader, who well deserves to be called out for all kinds of terrible things he has said and done, does his initial reaction to and handling of the coronavirus crisis really differ in any significant measure from what US and UK leaders, and their media sycophants, have been saying and doing?

After all, he is not the only world leader who had to be tested for coronavirus after assuring the population that its dangers were being exaggerated in the media. Boris Johnson, who initially preached the virtues of the neo-Malthusian concept of “herd immunity,” nearly died after being hooked up to oxygen in a London ICU.

Furthermore, why are so many media companies that worked to normalize his illegitimate rise to power now singling him out?

A recent article in the Atlantic, “The Coronavirus-Denial Movement Now Has a Leader” (3/27/20), based in part on an interview with Americas Society/Council of the Americas’ Brian Winter (who helped facilitate a meeting between Bolsonaro and US business leaders in 2017), says:

Nicknamed the “Trump of the Tropics,” Bolsonaro has sought to emulate the American president’s right-wing populist nationalism since launching his bid for the presidency in 2018. But compared with Bolsonaro’s position on the coronavirus pandemic, Donald Trump’s approach looks sober and scientifically grounded. 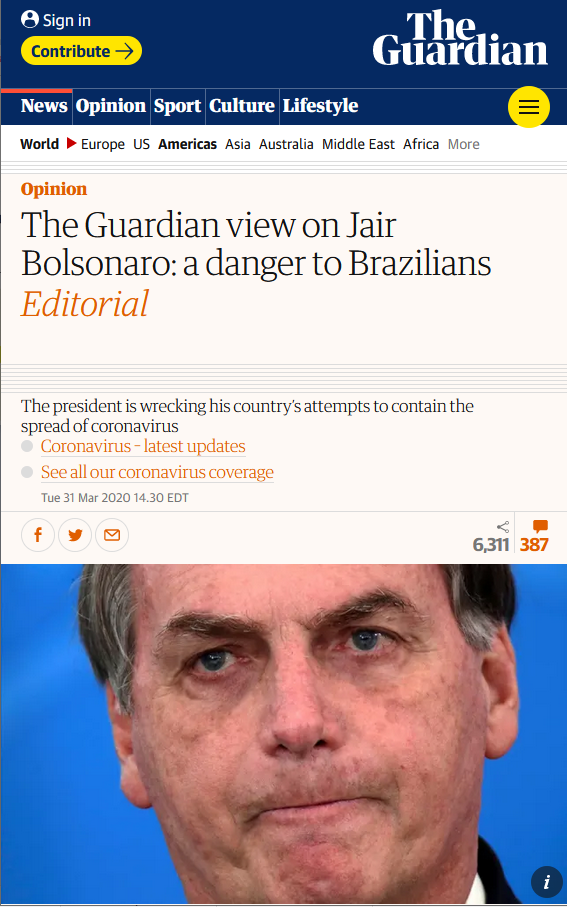 The Guardian (3/31/20) declares Jair Bolsonaro “a danger to Brazilians”—but pointedly does not call for him to step down.

A recent Guardian editorial, “The Guardian View on Jair Bolsonaro: A Danger to Brazilians” (3/31/20), criticized him for decrying quarantine restrictions, touting unproven remedies and dismissing physical distancing. But the paper did not go as far as to suggest that Brazil’s right-wing extremist president “step aside,” as its sister publication, the Observer (3/19/16), did with Brazil’s former social democratic President Dilma Rousseff during the right-wing parliamentary coup against her, documented in Petra Costa’s Oscar-nominated film Edge of Democracy.

Most of the media outlets that worked to normalize Bolsnonaro’s rise to power have given mixed signals about him since he took office, balancing praise for his deep austerity cuts and neoliberal privatizations with guarded criticism of his horrific environmental record. This changed last month when he was transformed into the international coronavirus bogeyman.

The fact of the matter is, however, that there is very little difference between what Bolsonaro is saying about the coronavirus and what many US and UK political and business leaders have said about it, including the leaders of both nations, as well as journalists and opinion piece writers in many of the same papers that have called Bolsonaro out.

Hundreds of Bolsonaro’s hard-core followers risked their lives on Sunday, April 5, to protest in the streets in front of government buildings in favor of vertical isolation, the idea, promoted by Bolsonaro for the last month, that only at-risk segments of the population should be put in quarantine. During his regular TV and social media appearances he has repeatedly demanded an end to state governors’ lockdown orders and downplayed the health risks, referring to the virus as a “little flu” that will only kill people who are already old or ill. 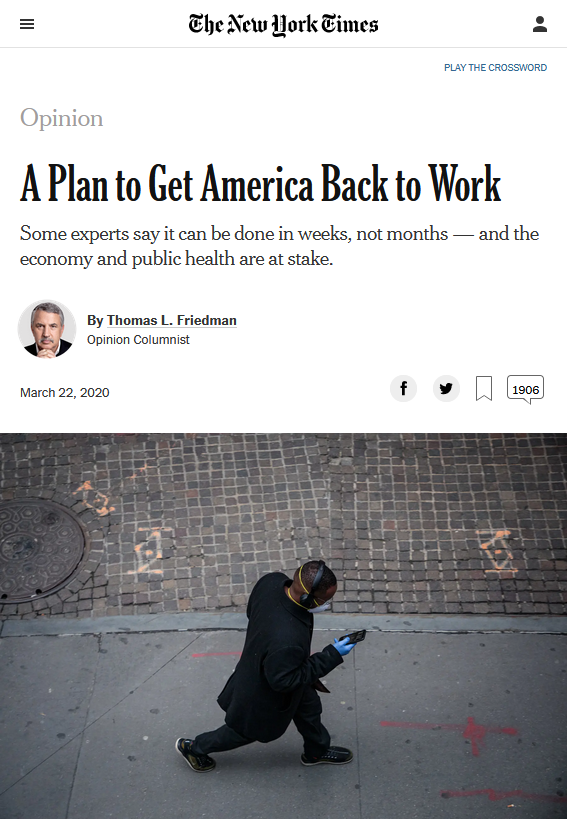 Like Bolsonaro, Thomas Friedman (New York Times, 3/22/20) compares Covid-19 to the flu: “The vast majority will get over it in days.”

These are dangerous ideas, not grounded in solid scientific or economic data, that generate public misunderstanding. But do they really differ in any significant manner from the recent New York Times op-ed piece (3/22/20) by Thomas Friedman?

On the pages of the Times, Friedman wrote, “as with the flu, the vast majority will get over it in days, a small number will require hospitalization, and a very small percentage of the most vulnerable will, tragically, die.” The article continues by calling for an end to quarantines for the sake of the economy.

As forecasters suggests the worldwide death toll could be in the millions, it’s incredibly irresponsible for a national leader to compare the coronavirus to a “little flu,” but Bolsonaro is not the only leader who has done it. In fact, many in Brazil believe he has been saying it in imitation of his idol, US President Donald Trump, who has also gone on record repeatedly comparing the coronavirus to the flu.

The Atlantic (3/27/20) criticizes Bolsonaro for railing “against lockdowns; closures of businesses, schools and public transport; anything that strays far from normalcy.” How different is this from Boris Johnson’s coronavirus adviser, Graham Medley, calling for a quick end to lockdowns in Britain, and why is Medley’s argument treated as a totally rational proposition in the Independent (4/4/20)? How different is Bolsonaro’s call to end lockdowns as quickly as possible from US President Donald Trump’s (subsequently walked-back) enthusiasm for ending them by Easter? 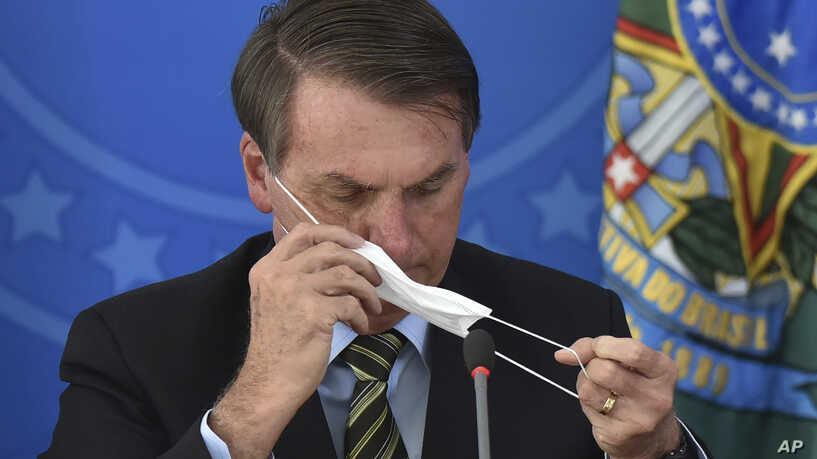 International media got a lot of mileage out of a five-second moment when Jair Bolsonaro had problems putting on his face mask. (Voice of America, 25 Mar 2020)

In propping up his arguments against quarantine, Bolsonaro has argued that unemployment is a bigger problem than coronavirus. This argument has been supported by the president of Banco do Brasil, Latin America’s largest bank. While it is true that Bolsonaro has made dismissive comments about people dying from Covid-19, he has not gone as far to suggest that the elderly should sacrifice their lives for the sake of the economy, as the lieutenant governor of Texas said on the Tucker Carlson Show (3/23/20).

Making public policy decisions that allow people to die in the name of the economy may sound shocking, but the cold fact of the matter is that, as Noam Chomsky wrote over 20 years ago, putting profit over people is one of the central tenets of neoliberalism, the dominant economic system in the Western world since the 1980s.

Furthermore, as anyone who has studied history knows, it has been a consistent element of capitalism since the days of primitive accumulation, when genocide of indigenous peoples, slave labor and massive land and natural resources theft were used to finance the construction of the first factories. The fact is that capitalism has always prioritized economic gain over the lives of people.

As the system evolved, and slavery and child labor were outlawed in America, most of the actual death became outsourced to the Third World, out of sight and out of mind for US consumers. Who wants to think of the child slaves working in the Congolese mines that extract coltan for their iPhones? Does anyone ever stop to think of the wars and sanctions that kill hundreds of thousands every year to keep our SUVs running on cheap, environmentally destructive oil?

The substantive difference now is that, from the Texas governor’s office to the New York Times editorial page, the coronavirus crisis is bringing the death that is required for the capitalist system to maintain its order closer to home. It is no longer the faceless masses in Africa, Latin America or Asia, but our parents and grandparents. As this predatory relationship is laid bare for all to see, as our own evil clown president declares that “WE CANNOT LET THE CURE BE WORSE THAN THE PROBLEM ITSELF and tells his followers that wearing a mask is optional, it’s handy to draw the public eye toward an “other”—a foreign bogeyman. It’s not us, the headlines scream—“look at that guy!”

Brian Mier is co-editor at Brasil Wire and editor of the book Year of Lead: Washington, Wall Street and the New Imperialism in Brazil. He has lived in Brazil for 25 years.