COVID-19: How Much Is It Worth to Save the Elderly?

COVID-19 is squeezing the economy as nations impose lockdowns. Some are asking: Is the financial pain worth saving the elderly? 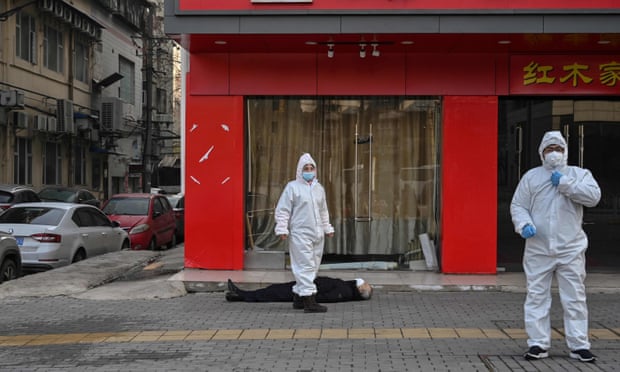 Emergency staff in protective suits check the body of an elderly man who collapsed and died in the street in Wuhan on 20 Jan 2020. Photograph: Héctor Retamal/AFP via Getty Images

9 Apr 2020 – The new coronavirus is forcing the world to ask some heart-breaking questions. Should we try to save as many people as we can from COVID-19? Or risk losing millions of the elderly and vulnerable to the disease to salvage our economy?

At this moment, tens of millions of our fellow human beings are confined to their homes, while many thousands struggle for breath in hospital. Their daughters, sons, nieces, nephews, students, grandchildren and friends stay far away, keen to shield them from the COVID-19 pandemic long enough for the virus to run its course or for science to find a cure.

COVID-19 poses the greatest danger to those who are over 50 or who have underlying health conditions such as diabetes and heart disease. And rank is no shield: British Prime Minister Boris Johnson, 55, is in intensive care at a London hospital.

Now, some right-wing politicians are asking if it would be better to end the lockdown measures, which protect the elderly and vulnerable but which are squeezing economic output and earnings, and instead move to safeguard the financial well-being of generations to come.

Are the elderly expendable?

Science fiction abounds with dystopias that sustain economies through regular culls of the old. There are mass forced suicides in P.D. James’s novel “Children of Men”. A horrific food source in the pollution-depleted planet in the film “Soylent Green”. The systematic murder of those over 30 in the movie “Logan’s Run”.

That’s not far off what Texas Lieutenant-Governor Dan Patrick suggested in a Fox television interview on March 24, days before his own 70th birthday.

‘The whole concept of death is terrible’

“No one reached out to me and said, ‘As a senior citizen, are you willing to take a chance on your survival in exchange for keeping the America that all America loves for your children and grandchildren?’” he said. “And if that’s the exchange, I’m all in.”

Until he was scared into a reversal by dire forecasts from infectious disease experts, U.S. President Donald Trump had proposed returning the United States to business as usual by Easter, whatever the cost in lives.

“The whole concept of death is terrible,” Trump said in a news briefing on COVID-19 on March 24. “But there’s a tremendous difference between one percent and four or five.”

How much is a life worth?

British right-leaning political commentator Toby Young prompted outrage by arguing in The Critic magazine that preserving the elderly wasn’t worth the economic price.

“Spending 350 billion pounds to prolong the lives of a few hundred thousand mostly elderly people is an irresponsible use of taxpayers’ money,” he wrote.

Imperial College London forecasted last month that as many as a quarter of a million British people could die if the government took no mitigating steps, and that measures such as a ban on group gatherings and self-isolation could keep the death toll below 20,000.

Based on these calculations, Young wrote, the government had valued each life at about 1.5 million pounds. “Now, that’s almost certainly over-egging it,” he said.

Johnson’s chief scientific advisor, Patrick Vallance, initially suggested letting the virus spread until Britain developed “herd immunity.” (That’s the point at which enough of a population — Vallance pegged this at 60% — carries the antibodies to defeat a given virus, either through mass infection or vaccination). When that notion aroused sharp criticism, the government backed off and imposed a lockdown.

The economic question is separate from the heart-breaking choices healthcare workers are being forced to make in apportioning a limited number of respirators — decisions based not only on age but on the patient’s “capacity to benefit.”

Ilona Finlay, a Welsh doctor and member of the UK House of Lords, told BBC Radio 4 last month that people of every age should be “having key conversations with their nearest and dearest.” These should set out, in clear terms, what medical steps they want—or don’t want—taken if they get the virus, she added.

‘If people die, there’s no economy. ‘

But allowing COVID-19 to spread to save the economy and financial markets would represent a mass sacrifice on the altar of capitalism and lead to a terrible loss of life And at least one authority says that in any case, it would do little to ease the economic pain.

“First, there’s a false dichotomy between saving lives and re-opening the economy,” Tommaso Valletti, Head of the Department of Economics and Social Policy at Imperial College London, told me in an email exchange.

“People are dying right now, and in large numbers. If people die, there’s no economy. So, in the short run the priority is clear: save lives, then eventually we will be able to run the economy again.”

Valletti said stimulus packages to ease the pain of lost wages and revenues will inevitably leave a massive debt to burden future generations, but that governments have little choice given the heavy toll the pandemic will take on the economy.

The debt of governments that are passing huge stimulus packages will rise, and this may burden future generations, Valletti said. But not spending the money to prop up the economy would be worse, he added.

‘The government should be spending more.’

Credit rating agency Fitch last week forecast a deep global recession this year and said economic growth in Europe and the United States is unlikely to return to pre-pandemic levels until late next year. U.S. unemployment claims surged to a record 6.6 million last week, and the outbreak has not peaked there yet.

According to Valletti, the value of a statistical life — a standard figure used by economists — is $14.5 million. So, using Young’s logic, “the government is not doing enough in the current crisis, since it should be willing to spend 10 times more, according to standard economic estimates.”

Keeping elderly safe until there is a vaccine

The reactions of elderly to the notion that they should risk premature death for a quick end to the economic coma have ranged from resignation to fury.

“At the very old age of 86, I still have a strong desire to survive,” said George Graham, a retired newspaper editor who lives in Lakeland, Florida (and is my uncle). “And there are those who love and depend on me. I am not about to abandon them. It would take a far more noble cause to make me even think of sacrificing what remains of my life.”

While it is true that most COVID-19 victims who end up developing severe or fatal illness are older than 50, youth is no guaranteed safeguard. World Health Organisation officials said last week they are seeing an increasing number of younger victims in intensive care units, some without any underlying health issues.

‘Think of how many aged geniuses left the world with great gifts.’

Forced to weigh economic costs against health risks, governments are considering safe ways to restart their economies — introducing mass testing and issuing “immunity passports” that would allow those with antibodies to return to work. However, a shortage of chemical reagents used in the tests means it will take time to roll out such measures.

For now, vast swathes of the global population must stay apart and at home. The hope is that we can keep elders safe until one of the countries racing to develop a vaccine can cross the finish line.

“Think of how many aged geniuses left the world with great gifts,” Graham said. “I — or someone even older — might yet surprise everyone and create something priceless. Handel was no spring chicken when he wrote the ‘Messiah.’”

Sarah Edmonds has been a journalist for three decades. She spent 27 years with Reuters in seven countries on three continents as a reporter, news editor, bureau chief and news operations manager.

(For other News Decoder stories on COVID-19, click here.)

One Response to “COVID-19: How Much Is It Worth to Save the Elderly?”