From Trump to Erdoğan, Men Who Behave Badly Make the Worst Leaders in a Pandemic 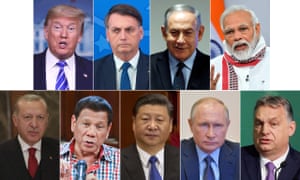 26 Apr 2020 – For those too young to remember, Men Behaving Badly was a light-hearted 1990s British and American sitcom about silly blokes doing stupid things. Covid-19 has revived the storyline. But now it’s not so funny.

Around the world, authoritarian leaders are exploiting, exacerbating or grossly mishandling the response to the pandemic, placing selfish interest ahead of public good.

They are mostly male. Their behaviour is frequently appalling. Unlike harmless Gary and Tony, they are a modern incarnation of TS Eliot’s “hollow men”.

Sex is relevant, in that female leaders are generally thought to be behaving better. Germany’s Angela Merkel, New Zealand’s Jacinda Ardern, and Taiwan’s Tsai Ing-wen are among competent and compassionate women singled out for praise.

Yet do the worst-performing leaders share dysfunctional characteristics beyond mere maleness? A war fixation is one. Poverty of imagination is another. They routinely trot out tired martial metaphors and cliches such as “wartime president”, “blitz spirit”, and “fighting the invisible enemy”.

Lack of empathy also seems to be a common denominator, even among self-styled “man of the people” populists. This may be a product of class, culture or elite upbringing.

Donald Trump ticks all the boxes. He is the Covid champ of chumps. His advice last week to inject disinfectant hit new heights of toxic idiocy, even for him. But there are plenty of challengers for the world title.

Take Recep Tayyip Erdogan, Turkey’s “strongman” president. His initial response to a growing Covid-19 threat was to put the economy before lives. Erdogan is accused, like Trump, of politicising the crisis, for example by banning fundraising efforts by opposition-controlled city councils in Istanbul, Izmir, and Ankara. The impressive performance of Istanbul’s mayor, Ekrem Imamoglu, a possible 2023 presidential rival, is said to worry him more than the disease.

Rushed curfews and protective measures have caused confusion and panic-buying. And Erdogan fumbled a chance to foster unity of purpose when an early release of prisoners excluded jailed political opponents, journalists and human rights activists.

The world expects better of Turkey. In the Philippines, the macho antics of Rodrigo Duterte, a president notorious for celebrating extrajudicial murder, are par for the course. Like right-wingers elsewhere, Duterte minimised the Covid-19 threat, then over-reacted.

A typically heavy-handed clampdown has followed belated lockdown measures. Duterte ordered the police and military to kill those who did not comply. “Shoot them dead,” he urged. “Instead of causing trouble, I’ll send you to the grave.”

Duterte’s assumption of emergency powers mirrors power-grabs in other countries with weak systems of democratic accountability. Hungary’s rightwing populist leader, Viktor Orbán, says his new power to rule indefinitely by decree can be revoked any time. Opponents fear a tame parliament may never do so.

Some of the world’s most authoritarian leaders have reacted with a morbid mix of crass irresponsibility and calculation. Jair Bolsonaro, Brazil’s president, appears to hope, Trump-like, that he can turn the poor’s hostility to job-destroying lockdowns to political advantage.

“Bolsonaro has compared the coronavirus to a mild flu, incited his supporters to oppose lockdown measures adopted by local governments, [and] promoted unproven drugs on social media as miracle cures,” wrote Eduardo Mello, a Sao Paulo professor. If Brazil’s economy implodes, Bolsonaro, weirdly, could be the gainer – unless he is impeached first.

China’s leader, Xi Jinping, is also using the pandemic for political ends, as evidenced by the opportunistic arrest last week of 15 veteran Hong Kong pro-democracy figures. Virus-related security and economic fears are being exploited to justify an ever tighter crackdown after last year’s failure to halt anti-Beijing protests.

But the hard men are not having it all their own way. Xi’s carefully nurtured reputation for quasi-celestial infallibility has taken a knock in the wake of the Wuhan disaster. The shine is also coming off India’s Hindu nationalist prime minister, Narendra Modi.

Modi seemed to carry all before him last year, especially following the Kashmir crackdown. A brutal anti-Muslim pogrom in Delhi barely dented his domestic standing. But self-inflicted economic and social damage arising from clumsy, chaotic anti-virus measures are painting a less flattering portrait of incompetence and irrelevance.

Likewise the credibility of Vladimir Putin, the Russian president who specialises in exporting lethal germs, is in question after a slow start to the fightback.

Shielding himself from harm, he-man Putin looks on impotently as Russia’s coronavirus caseload spirals upwards and the global oil price, key source of Kremlin cash, goes the other way.

In contrast, the pandemic has saved Israel’s prime minister, Benjamin Netanyahu, from deserved oblivion. After a third, inconclusive election, and with a corruption trial looming, Netanyahu looked dead and buried. His resurrection is largely due to unscrupulous use of the virus threat as a national rallying cause.

Faced by all this bad behaviour, despair is an option. As Eliot wrote in The Hollow Men, “This is the way the world ends/ Not with a bang but with a whimper”. And yet, perhaps not.

Progressives can take comfort from the way autocrats and rightwing populists have mostly flunked the Covid-19 challenge. Maybe people around the world, shocked by all the high-handed bungling, will begin to resist and reverse the recent trend towards authoritarianism.

It would be reassuring to think so. On the whole, democracies have behaved better during the crisis. But the UK and US responses have been dismal. Maybe that’s because, in both cases, a certain kind of shallow, arrogant man is in charge.

Simon Tisdall is a foreign affairs commentator. He has been a foreign leader writer, foreign editor and US editor for the Guardian.

One Response to “From Trump to Erdoğan, Men Who Behave Badly Make the Worst Leaders in a Pandemic”