Inside Jared Kushner’s Coronavirus Research: A Wide Net on a Giant Facebook Group

The president’s son-in-law and senior adviser takes a leading role in a variety of Trump challenges, this time responding to the escalating coronavirus outbreak. 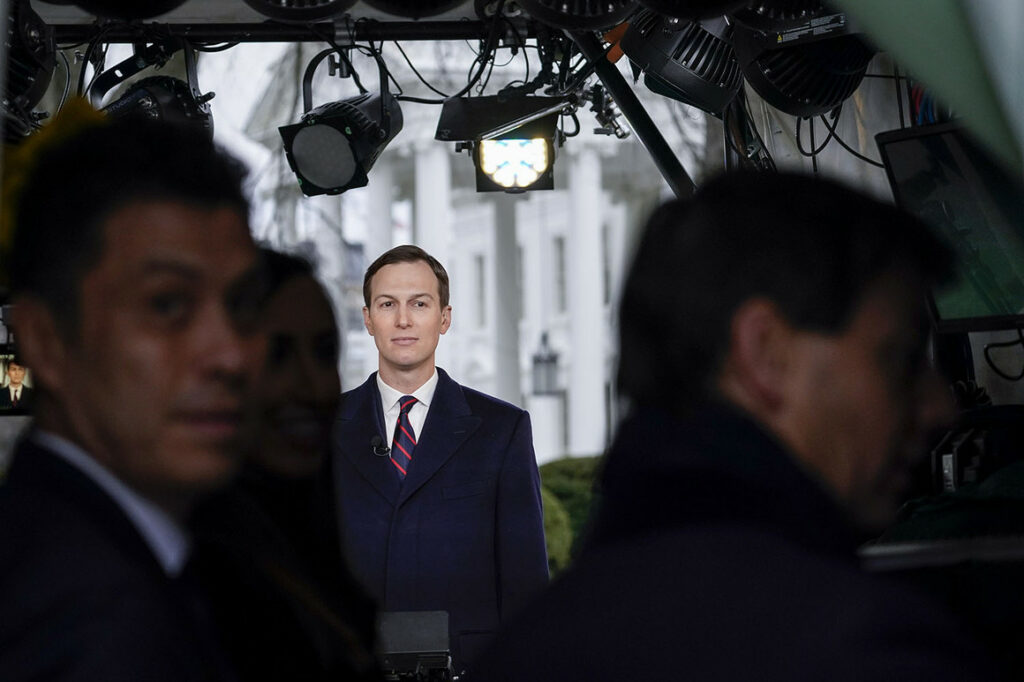 13 Mar 2020 – Just before midnight Wednesday [11 Mar], a doctor asked a group of fellow emergency room physicians on Facebook how they would combat the escalating coronavirus outbreak.

“I have direct channel to person now in charge at White House,” Kurt Kloss wrote in his post.

The next morning, after hundreds of doctors responded, Kloss explained why he sought the suggestions: Jared Kushner, President Donald Trump’s son-in-law and senior adviser, had asked him for recommendations.

The Facebook crowd-sourcing exercise showed how Trump‘s team is scrambling for solutions to confront the outbreak after weeks of criticism for the administration’s sluggish response, a shortage of tests and the president’s own rhetoric downplaying the pandemic. It is now expected to consume the final year of Trump’s first term and threaten his campaign for a second term.

Trump appointed Vice President Mike Pence to lead a task force to combat the spread of the coronavirus two weeks ago. But in recent days as conditions worsened and criticism mounted, Kushner took a more active role, according to two people familiar with the situation.

Kushner has attended several meetings on coronavirus alongside Trump, including one with banking leaders at the White House Wednesday to discuss how they could help their customers hit by the outbreak. He is also talking to people about whether Trump should declare an emergency, bringing in the Federal Emergency Management Agency to coordinate and unleashing billions of dollars for struggling states.

Trump has tapped Kushner to lead on several contentious issues, including Middle East peace, immigration and criminal justice reform, all of which involved him engaging in lengthy consultations with impacted people before recommending a decision to Trump.

In a Facebook post, Kloss said Kushner is “now directly involved in the response to this,” referring to coronavirus.

The Facebook group, EM Docs, has nearly 22,000 members around the globe who are required to provide their credentials to join. The posts about Kushner’s request have been removed but a member shared pictures of them with POLITICO. The Spectator first reported on the posts late Wednesday.

On February 27, one of the other doctors on Facebook questioned why Pence was put in charge of the task force over Health and Human Services Secretary Alex Azar, when the vice president has no significant health care experience.

“The only thing that gave me any sense of confidence was that Dr. Anthony Faucci [sic] was on that stage,” responded Kloss, citing the well-respected director of the National Institute of Allergy and Infectious Diseases.

Kloss did not immediately respond to requests for comment.

“In his role as a senior adviser to the president, Jared Kushner is, of course involved in the coronavirus response, but he is not in charge of coronavirus research,” a White House official said.

Kloss solicited recommendations on Facebook just hours after Trump’s brief prime-time address in which the president misrepresented his administration’s own actions involving a 30-day ban on foreign visitors from Europe.

“If you were in charge of Federal response to the Pandemic what would your recommendation be. Please only serious responses,” he wrote. “I have direct channel to person now in charge at White House.”

Some doctors expressed skepticism about his connection but most of them posted serious proposals, including nationalizing the production of testing kits, creating pop-up field hospitals with ICUs and activating FEMA. A doctor posted the top 12 recommendations on Twitter with the hashtag #EMDocs.

“I would like to thank everyone who made suggestions on how to manage the crisis. However, some challenged me on the validity of my statement in being in a position to hopefully advocate for our patients,” he wrote. “So for transparency I will provide some background about my unique circumstance. I have not shared this in a professional forum before.”

Kloss, who indicated he fills in at multiple hospitals when they are short of doctors, told the group that his daughter, internationally known model Karlie Kloss, is married to businessman Joshua Kushner, the younger brother of Jared Kushner.

He wrote that he had spent two weeks complaining to his son-in-law about the lack of equipment, testing and ventilators.

“Tonight I was asked by Jared through my son-in-law for my recommendations, that’s when I turned to you my fellow BAFERD’s for help,” he wrote using a nickname for Bad Ass Fucking Emergency Room Doctors. “Between patients tonight I have reviewed your responses and will summarize what I am sending to Jared for your PEER review before I send it.”