Visiting Auschwitz the Day Poland Locked Itself Down

Genocides start with an act of framing human community, with their distinct group identity, typically vulnerable and weak, as ‘a virus’ or ‘existential threat’ 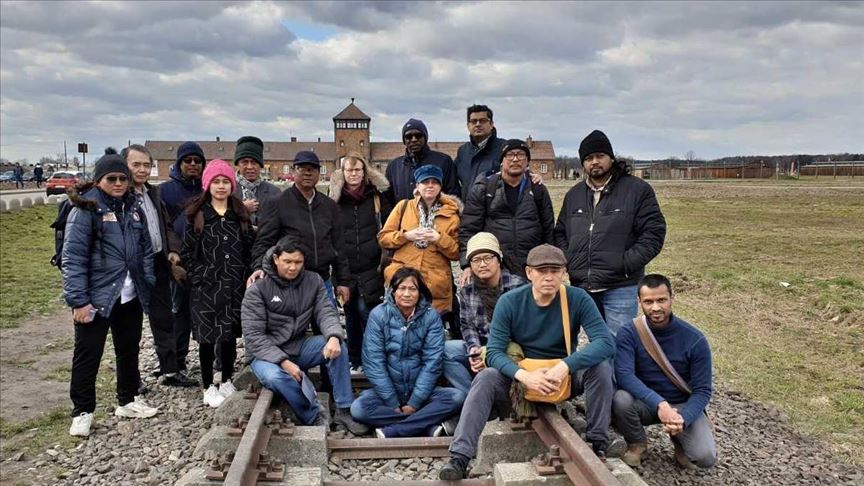 30 Mar 2020 – The SS, Hitler’s ruthless deliverers of death, came to believe their own racially-charged propaganda about diseases being spread by Jews in Nazi-occupied Europe. They succumbed to their own fears of viruses and other contagions. So much so, that during the deportations of Jews from the

ghetto to the camps, the SS troops in Krakow would not enter the Jewish ghetto hospital set up in 1941. Knowing this, Jewish medical staff were able to hide healthy people among the sick to save them from deportation, explained our Polish guide Yacob, a brilliant sociologist who specializes

We, a group of 18 Rohingya activists, anti-racist Burmese campaigners, and international genocide scholar-activists drawn from three different continents, were on the Galicia Jewish Museum-organized walking tour of the once vibrant Jewish neighborhood known as Kazimierz and the Nazi-built ghetto (March 1941-March 1943), a 10-minute walk away across the River Vistula.

In a single morning, months of planning for this genocide study tour at Auschwitz-Birkenau, history’s largest mass extermination site, looked to be in vain. Just hours before our group, already en route, landed in the Polish medieval capital Krakow on March 11, the Republic’s President Andrzej Duda ordered the closure of all state institutions, including Auschwitz-Birkenau State Museum, effective as of March 12. The museum officials who were organizing our visits shared our disappointment, and were extremely apologetic about the unexpected turn of events.

Personally, I was disappointed, because I wanted my fellow activists to bear witness, retrospectively, to what could ultimately result when a racist and racialized state misframed a national and religious minority as a “virus”, “vermin”, and “threat” to the survival of the majoritarian national public. Nonetheless, we were able to learn together and reflect on the lessons of the past.

Auschwitz-Birkenau has no parallel in history. I was there two years ago, having visited the site to make a two-minute videotaped appeal relating to the Rohingya genocide taking place in my own country. It was aimed at the EU leaders, and, more specifically, European citizens — to live their pledge of “Never again!”. Myanmar has for the past several decades institutionalized the destruction of predominantly Muslim Rohingya as a group in its western region. They are popularly perceived, in effect, as unwelcome “illegals”, “viruses” and worse, who “infiltrate” Myanmar’s geographic, cultural, and political spaces.

Myanmar is now defending itself against the allegations of genocide at the International Court of Justice. To date no EU government, institution or investor has taken any real action, save the recent decision by the German Ministry of International Development Cooperation to suspend development cooperation with Myanmar.

Despite the closure of Auschwitz, our group went ahead with an adapted 1st day program, with a professional guide Marta, who lives in an old building which used to be an SS barrack in the town of Auschwitz. According to our guide, the town was chosen by the SS planners for its good transport links with the rest of the Nazi-occupied Europe, to be the site of the Final Solution — the accelerated mass extermination of Jews, and other unwanted minority groups such as Roma people. The victims numbered nearly 1 million.

Auschwitz-Birkenau Museum is a complex of three concentration camps: one slave labour camp, named Monowitz and two extermination sites — Auschwitz I — and the last addition at Birkenau, the vast camp with its iconic two-story, red-brick SS building and Auschwitz’s Death Entrance where the SS received their victims who were transported by rail in cattle cars.

At Monowitz, now a residential area dotted with structures and reminders of the past, we saw the original buildings of the joint economic ventures run by Himmler’s SS and German conglomerate IG Faben, one of Europe’s largest chemical/pharmaceutical conglomerates.

Genocides often accrue economic gains to those who are involved, including for perpetrators, collaborators and bystanders: public-private partnerships with genocidal agreements.

It was here that two well-known holocaust survivors were used as slave labour: the late Romanian-Jewish American writer Elie Wiesel, and the Jewish Italian from Turin, Primo Levi. Today the old buildings are still in use by different corporations. The sites and buildings which the SS Chief and German corporate executives used serve as monuments to the dark past.

One hears so much about how states sanction society’s racisms, and how events turn genocidal when states decide to mobilize majority populations against groups scapegoated for society’s woes using these classed and raced myths. There is more to genocides than racisms.

Some 75 years after the closure of Auschwitz-Birkenau by the victorious Soviet Red Army in January 1945, the bigger picture of corporate-state symbioses which typify international relations has not changed a bit, with or without the Convention on the Prevention and Punishment of the Crime of Genocide. While talking up the rule-based world order, UN member-states, big and small, repeatedly disregard international law while simultaneously signing and ratifying statutes and treaties which arose out of the ashes of the last world war — and specifically the Holocaust — invented precisely to prevent the repeat of war crimes, crimes against humanity and the crime of genocide.

Even without the intimate look inside the two death camps, our group was still shocked to see the vastness of the institutionalized mass-killing and bottomless inhumanity of Hitler’s executioners. Every person in our group works in their own way — and with their own risks — to end Myanmar’s slow-burning genocide of Rohingya in Rakhine state. Each one of us saw parallels between the Nazi genocide, and contemporary genocide in Myanmar. These were not methodological similarities, to be sure: there are no gas chambers and no crematorium in the Burmese genocide of 2 million Rohingya. But there certainly is a parallel in the degrees of cruelty and inhumanity displayed by the perpetrators as described by Rohingya survivors. The Myanmar government troops tossing Rohingya babies into the fire, torching Rohingya houses with trapped and immobile elderly Rohingya inside, verbally assaulting the identity of Rohingya victims before slaughtering them, raping women in front of their children and families, and the list goes on and on.

We all felt the piercing and personal pain at the largest site of Nazi mass killings. I emailed a close Burmese colleague in Montreal a group picture of our group on the iconic train track in front of the Death Entrance, and he responded: “You all look sad and distraught.” How else could we have felt at the sight of Auschwitz-Birkenau having just peaked through the electrified double-barb-wire fences in-between concrete poles?

Auschwitz continues to serve as the most sobering reminder about how every state and every society — irrespective of cultural, religious, ethnic or racial background — could and would turn genocidal under the right material, political and psychological conditions. In the name of the defense of Christian, Hindu, Buddhist Jewish and communist nations and states, their chosen peoples have been committing genocides throughout history. As I pen this essay, genocides and crimes against humanity are being committed not just by “Buddhist Myanmar”, but also by India, China and Israel. Ask the Palestinians, Uighurs and Muslims of India.

Our second and last day in Krakow was devoted to the study of the pre-genocidal conditions of the Jews of Krakow. Our host and collaborating institution, the Galicia Jewish Museum — a non-profit community organization — voluntarily closed to public in response to the coronavirus outbreak, but kindly supported our study group, allowing us access to the museum’s facilities, including the bookshop, and a lecture room.

We participated in a study tour of Krakow’s Old Jewish neighborhood and the walled Jewish ghetto — located within a short walking distance from Oscar Schindler’s enamel factory immortalized by Hollywood. The day’s visit of the Jewish neighborhood, once home to nearly 70,000 residents, and the Jewish ghetto, where the SS forced 20,000 Jews from Krakow and other areas, to exist in the space large enough for 3,000, was the most educational experience for us.

It was this ghettoization process of the Rohingya in downtown Aung Mingalar neighborhood in Sittwe, Rakhine state of Myanmar, (and IDP camps) which triggered George Soros’ teenage memories of the Jewish ghetto in Budapest, from which he escaped to London. The renowned American philanthropist and financier visited Rakhine in February 2015.

A few months later, in his videotaped address to the international conference on Rohingya genocide at the Norwegian Nobel Institute in Oslo, Soros said: “In Aung Mingalar, I heard the echoes of my childhood. You see, in 1944, as a Jew in Budapest, I too was a Rohingya. Much like the Jewish ghettos set up by Nazis around Eastern Europe during World War II, Aung Mingalar has become the involuntary home to thousands of families who once had access to health care, education and employment.”

To be sure, vast mass extermination sites, gas chambers and crematoriums are unparalleled. But it is the gradual, systematic process of priming the targeted ethnic, racial, religious or national group for intentional destruction that is prevalent in all genocides. It starts with an act of framing a human community, with their distinct group identity, typically vulnerable and weak, as “a virus”.