How Does the US Rally Support for Wars That Kill Millions of Innocent People Worldwide?

New Book Identifies the Paradigm Underpinning U.S. Decisions to Enter War, Past and Present, and the Narrative Used by Government and Media to Garner Widespread Buy-In

21 May 2020 – Campaigns against Native Americans. The War of 1812. World War I, World War II, Iraq and Afghanistan… The United States has been at war for the vast majority of its history.

These wars have killed millions of innocent men, women and children around the world. Yet more often than not they have been based on weak evidence, questionable motives, and outright lies. Why, then, do large portions of the public staunchly support the US troops?  Why are so many Americans satisfied with the U.S. bombings of Yemen, Syria, Afghanistan, Pakistan and other Middle Eastern countries, knowing that this is creating starvation and refugee crises of catastrophic proportions?

In his new book, Propaganda, Lies and False Flags: How the U.S. Justifies its Wars (June 2020, Red Pill Press), journalist and human rights activist Robert Fantina explains how the US government has rallied public opinion to support its wars and military objectives since before the American Revolution. 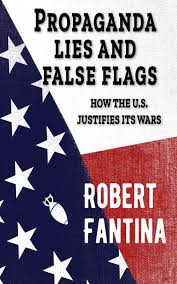 Through a deep, comprehensive analysis of every war the U.S. or its colonial predecessor has waged from 1755 to the present, Fantina demonstrates a clear pattern that has shaped not only decisions to enter into war, but also the narrative used to rally U.S. citizens’ support of these actions.

The pattern consists, first, of brandishing what Fantina refers to as “false flags”—that is, perceived threats, dangers or human rights violations such as Iraq’s non-existent weapons of mass destruction and involvement in 9/11, or alleged chemical attacks by the government of Syria that were never corroborated. Next comes the use of propaganda to manipulate public opinion and enlist widespread buy-in. Quoting and parroting the government, the media helps spread this propaganda. This approach has successfully garnered support for both official warfare and acts of aggression such as plundering other country’s resources and removing left-leaning foreign leaders.

The many revelations in Propaganda, Lies and False Flags include:

Each of the book’s fifty-plus case studies is presented with meticulous research and corroborating primary sources.

Ultimately, Fantina hopes that by recognizing the ‘big lies’ that the U.S. government tells, people will begin to believe them with less ardor and less frequency–and that this will be the first step toward changing the centuries-long U.S. policy of constant war-making.

Keep this book on your shelf to quickly lay your hands on the false reasons for each past war, and many of the real reasons too. The latter are always shameful, which is why the former are invented. Included here are wars, coups, and incidents you may not know about. Not only is this a resource for countering new war lies by comparison with old ones, but with a limited number of nations on earth and the Pentagon’s penchant for attacking the same ones repeatedly, you may just find the very lies now on the news already debunked in this book. —David Swanson, Nobel Peace Prize Nominee and author of twelve books including War Is A Lie and When the World Outlawed War.

Meticulously detailed and thoroughly articulated, Bob Fantina’s latest book, Propaganda, False Flags and US Wars, is an incredibly valuable resource for citizens across the world. The amount I learned while reading this book is staggering and Fantina’s core thesis, that propaganda and false flags are not outliers, but vital and significant aspects of US war making, going back to the Native American wars, is imparted in such a manner readers will return to this book continually as a resource for not just understanding history, but for understanding current and future US wars. —Matthew Hoh, Senior Fellow, Center for International Policy

Robert Fantina is an activist and journalist working for peace and social justice. A U.S. citizen, he moved to Canada shortly after the 2004 presidential election, and now holds dual citizenship.