How We Became Refugees: The Day My Grandfather Lost His Village in Palestine

15 May 2020 – Starting on March 27, 1948, a beautiful, small Palestinian village called Beit Daras, came under Zionist militias attacks. With little means – a few old rifles and kitchen knives – the Badrasawis fought back, repelling the first raid and the second. The final attack on the peaceful village followed a scorched-earth military strategy, leaving in its wake scores of dead and wounded, and the entirety of the village on the run. Among the thousands of ethnically-cleansed Palestinians in Beit Daras, a family of six, including an infant, salvaged a few old blankets and some supplies and went searching for a safe place, with the hope that they would return home in a few days. Their nearly one hundred descendants are yet to return to Beit Daras, 72 years later.

“Why bother to haul the good blankets on the back of a donkey, exposing them to the dust of the journey, while we know that it’s a matter of a week or so before we return to Beit Daras?” Mohammed told his bewildered wife, Zeinab. Many years later, Grandma Zeinab would repeat this story with a chuckle as Grandpa Mohammed would shake his head with an awkward mix of embarrassment and grief.

I cannot pinpoint the moment when my grandfather, that beautiful, old man with the small white beard and humble demeanor discovered that his “good blankets” were gone forever, that all that remained of his village were two giant concrete pillars and piles of cactus. I know that he had never given up hope of returning to Beit Daras, perhaps to the same small mud-brick house with the dove tower on the roof.

Beit Daras’ inconsequential existence of the present would espouse little interest, save two concrete pillars that once upon a time, served as an entrance to a small mosque, the walls of which, like those faithful to it are long gone. Yet, somehow, they still insist on identifying with that serene place and that simple existence. On that very spot, on the shoulder of that small hill, huddled between numerous meadows and fences of blooming cactus, there once rested that lovely little village. And also, there, somewhere in the vicinity of the two existing giant concrete pillars, in a tiny mud-brick home with a small extension used for storing crops and a dove tower on the roof, my father, Mohammed Baroud, was born.

It isn’t easy to construct a history that, only several decades ago, was, along with every standing building of that village, blown to smithereens with the very intent of erasing them from existence. Most historic references of Beit Daras, whether by Israeli or Palestinian historians, are brief, and ultimately, resulted in delineating the fall of Beit Daras as just one among nearly 500 Palestinian villages that were often ethnically cleansed and then completely flattened during the war years of 1947-1949. It was another episode in a more compounded tragedy that has seen the dispossession and expulsion of nearly 800,000 Palestinians. For Zionists, Beit Daras was just another hill, known by a code battle name, to be conquered, as it were. But it should be more than a footnote in David Ben Gurion’s ‘War Diaries’, or Benny Morris’s volume, ‘The Birth of the Palestinian Refugee Problem’. It’s more than a few numbers on an endless chart, whether one that documents victims of massacres, or estimates of Palestinian refugees still reliant on United Nations food aid. For Palestinians, its fall is one of many sorrows in the anthology which is collectively known as Al-Nakba, or the Catastrophe. 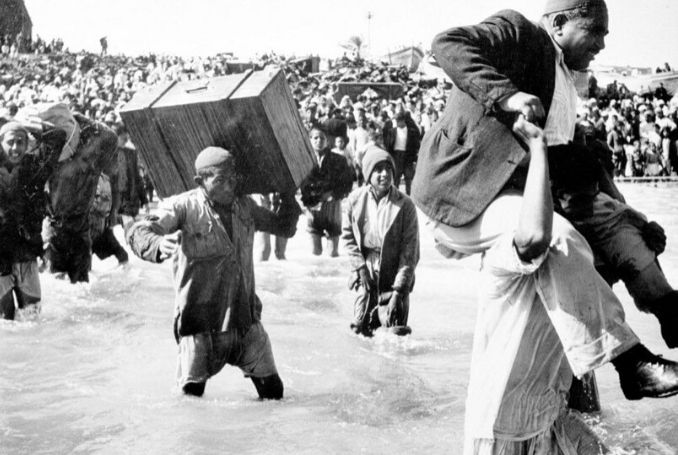 Palestinian refugees were forced by Zionist militias to flee their homes during the ‘Nakba’ – The Catastrophe – of 1948. (Photo: via UNRWA)

My grandparents never tired of reminiscing about their beloved village. My grandfather was often mocked at for supposedly failing to understand the depth of his tragedy, by insisting on leaving the “good blankets” behind as he herded his children together to escape the village and the intense bombardment. He died merely 58 kilometers southwest of Beit Daras, in a refugee camp known as Nuseirat.

Beit Daras provided dignity. Grandpa’s calloused hands and leathery weathered skin attested to the decades of hard labor tending the rocky soil in the fields of Palestine. It was a popular pastime for my brothers and I to point to a scar on his battered little body and to hear a gut-busting tale of the rigors of farm-life. Grandpa ran his fingers over the fading scar on the crown of his head and chuckled, “I got this one at dawn. I went to milk the cow, usually your grandmother’s chore, and that cow had it in for me. I squatted behind her and then everything went black.” Tales of being trampled by the donkey or being run-over by a plough, possibly life-threatening injuries were all reduced to humorous anecdotes sure to provoke a flood of laughter from his grandchildren.

Grandpa similarly enjoyed reminiscing on the good old days when he had land, a house, chickens, goats, a strong back – everything he needed to provide for his family. Camp life provided nothing for which to harvest a sense of self-respect. Food that was once the fruit of hours of toiling in his own fields, was now provided in a burlap bag by some European country or by the United Nations. Perhaps one of the greatest challenges he faced was enduring a life of idleness. One activity however, that occupied his time was sitting with other men in the camp and discussing the politics of the day, debating just from whom and when liberation would come. Would their lands back home be ready for planting? Would they be able to rebuild right away?

Later in life, someone would give him a small hand-held radio to glean the latest news and he would, from that moment, never be seen without it. As a child, I recall him listening to the news of the ‘Arab Voice’ on that battered radio. It had once been blue but had now faded to white with age. Its bulging batteries were duct-taped to the back. Sitting with the radio up to his ear and fighting to hear the reporter amidst the static, grandpa listened and waited for the announcer to make that long-awaiting call: “To the people of Beit Daras: your lands have been liberated, go back to your village.”

In my life, I only heard my grandpa curse on one recurring occasion. His younger son, Muneer, used to make sport of him by running into the room where he would sit and crying out, “Father, they just made the announcement, we can reclaim our land today!” My grandpa would jump from his chair and dash for the radio when my uncle could not contain his laughter any longer. Knowing that his son had so maliciously fooled him once more, he would point his shaky finger at him and mumble under his breath, “You little bastard”, and he would return to his chair to wait.

The day Grandpa died, his faithful radio was lying on the pillow close to his ear so that even then he might catch the announcement for which he had waited so long. He wanted to comprehend his dispossession as a simple glitch in the world’s consciousness that was sure to be corrected and straightened in time. He was not mindful of balances of power, regional geopolitics, or other trivial matters. But it is not as if Grandpa was not a keen man, for he certainly was in all worldly matters of relevance to his humble existence. But, he decidedly refused to entertain any rationale that would mean the acceptance of an eternal divorce from a past that defined every fiber of his being. For him, accepting that the “good blankets” were gone was the end of hope, the end of faith, the end of life. Grandpa Mohammed was a hopeful man, with strong faith. I loved his company, and his pleasant stories of Beit Daras, its simple folk and much happier times.