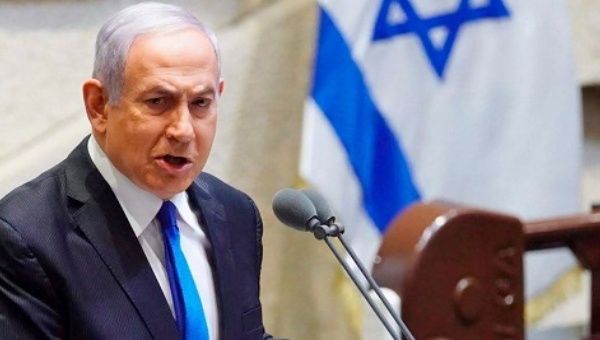 Israel’s new government has been contested in the country’s top court, with opponents arguing that Netanyahu was ineligible to rule. | Photo: EFE

17 May 2020 -“It’s time to apply the Israeli law and write another glorious chapter in the history of Zionism,” Netanyahu said.

The Israeli Knesset (parliament) swore in today a new government led by Prime Minister Benjamin Netanyahu who will alternate leadership with his former rival Benny Gantz, in a deal that could see the annexation of the Palestinian West Bank.

Lawmakers in the 120-seat Knesset approved the Netanyahu-Gantz three-year coalition, with 73 votes for and 49 against. One member was absent.

“It’s time to apply the Israeli law and write another glorious chapter in the history of Zionism,” Netanyahu said in an address to the parliament ahead of the vote.

“These territories are where the Jewish nation was born and grew,” the right-wing PM added.

RELATED: On the 72nd Nakba Palestine Faces Its Biggest Threat

Also on Friday, Jordan’s King Abdullah II warned that if the Jewish state annexes the West Bank, it would lead to a “massive conflict” with his country.

“If Israel really annexes the West Bank in July, it would lead to a massive conflict with the Hashemite Kingdom of Jordan,” King Abdullah II said in an interview published by Der Spiegel.

“I don’t want to make threats and create an atmosphere of loggerheads, but we are considering all options,” he said.

The United States (U.S.), under the administration of President Donal Trump, is for its part, unfailingly supporting Israel in its projects.

Facing the coronavirus outbreak, Netanyahu and Gantz ended last month Israel’s longest political deadlock and sealed a power-sharing agreement after three inconclusive elections in less than a year and almost a year and a half without a stable government.

Under the new deal, Netanyahu will serve 18 months as prime minister before handing over to Gantz, a former military chief, who will be the defense minister while waiting for the top post.

In his address Sunday to the parliament, Gantz announced “the biggest political crisis in Israel’s history” was over.

But when he decided to make a deal with Netanyahu and form a coalition with him, Gantz saw his Blue and White party dissolve, with his former allies feeling bitter toward a leader who had started his political career on the promise to oust Netanyahu but decided to support him instead.

RELATED: Hating Arabs as a Common Ground: Why Israel’s Coalition Government is Likely to Survive

Gantz’s former running mate Yair Lapid, who now heads the opposition, said the new government was the “largest, most bloated, most wasteful” in Israeli history.

Israel’s new ruling coalition has been contested in the country’s top court, with opponents arguing that Netanyahu, who faces three criminal corruption cases, was ineligible to govern.

But the court ruled earlier this month that “there was no legal reason to prevent the formation of a government” led by Netanyahu, who denies the corruption allegations.

It added that by approving the coalition it “was not seeking to diminish the severity of the charges” against Netanyahu, but concluded that those could be handled in his trial, which is due to begin on May 24.

Under the coalition agreement, Netanyahu will be able to benefit extra legal protections, meaning he will not have to resign despite the charges against him.