“The darkness of egoism which will have to be destroyed is the egoism of the Nation.  The ideal of India is against the intense consciousness of the separateness of one’s own people from others, which inevitably leads to ceaseless conflicts.  There my prayer is ‘let India stand for the cooperation of all the people of the world.’”
— Rabindranath Tagore 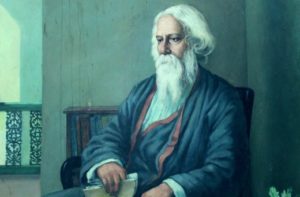 In a period of rapid change as we face today, it is often difficult to find the right balance between the cultural contributions and needs of the local, the national, and the universal.  One way of finding this balance is to look at the life and work of others, who earlier confronted the same challenges.  One such person was the poet, writer and cultural reformer Rabindranath Tagore, whose birth anniversary we note on 7 May. As Amiya Chakravarty, a literary secretary of Tagore wrote,

“Each individual must strike the ‘universal concrete’ in terms of his own creative effort, in the milieu of his own cultural heritage.  Only by proceeding from wherever we are, geographically, spiritually or vocationally, can we make the integral effort for peace.  The peace-workers belong to the entire human family, using the language or religious associations to which he has been born, and which he transforms, not necessarily by revolt but by inner transcendence.” (1)

Rabindranath Tagore was the Renaissance man of modern India — the bridge from an Indian culture dominated on the one hand by a traditionalism that had long ceased to be creative and on the other by English colonial practice whose reforms were self-interested.  He was known worldwide as a poet having received the Nobel Prize for Literature in 1913.  His aim was to combine a renewal of local thought, in particular that of his native Bengal, with an appreciation of the cultures of the world. The motto of the educational center he founded, Visva-Bharati, was “Where the world makes its home in a single nest.”

He hoped to be able to create such a synthesis at the local level and in 1922 created a rural reconstruction program combining education and agricultural reform at Santiniketan.  As he wrote of villages “Villages are like women.  In their keeping is the cradle of the race.  They are nearer to nature than towns are, therefore, in closer touch with the function of life.  They have the atmosphere which possesses a natural power of healing.  It is the function of the village, like that of a woman, to provide people with their elemental needs, with food and joy, with the simple poetry of life, and with those ceremonies of beauty which the village spontaneously produces and in which she finds delight.  But when constant strain is put upon her through the extortionate claim of ambition, when her resources are exploited through the excessive stimulus of temptation, then she becomes poor in her life and her mind becomes dull and uncreative.”

As he wrote “ I was born in 1861. It was a great period in our history of Bengal.  Just about that time the currents of three movements had met in the life of our country.”  One current was religious – the Brahmo Samaj – founded by Raja Rammohan Roy (1774-1833) in which Tagore’s family was active. Brahmo Samaj’s humanistic aim was to reopen the channel of spiritual life which, for Tagore, had been obstructed for many years by the sands and the debris of creeds, caste and external practices. For Tagore, to be human is to try to go beyond oneself, to join with a greater sphere of life in sacrifice, love, and friendship.  Tagore wrote “Men must find and feel and represent in all their creative works, man the eternal, the creator…For reality is the truth of man, who belongs to all times.  Man is eager that his feeling for what is real to him must never die; it must find an imperishable form.”

Thus Tagore was interested in all the religious currents in Bengal, devotional Hinduism, the popular and mystic currents of Islam as expressed by the Bauls whose poetry he transformed into songs.  He was also interested in the Christian currents present in Bengal with the English, especially those Protestant currents which combined social reform with faith.  As he wrote concerning the influence of Christianity on Mahatma Gandhi,

“As before, the genius of India has taken from her aggressors the most spiritually significant principle of their culture and fashioned of it a new message of hope for mankind.  There is in Christianity the great doctrine that God became man in order to save humanity by taking the burden of its sin and suffering on Himself.  That the starving must be fed, the ragged clad, has been emphasized by Christianity as no other religion has done…And to our great good fortune, Gandhi was able to receive this teaching of Christ in a living way.  It was fortunate that he had not to learn of Christianity through professional experts, but should have found in Tolstoy a teacher who realized the value of non-violence through the multifarious experience of his own life struggles.  For it was this great gift from Europe that our country had all along been awaiting.”

The second current was literary.  It was an effort by Tagore and other poets and writers such as Bankim Chandra Chatterji (1838-1894) to awaken the Bengali language from its stereotyped style and limitations of language.  His was an effort to bring the ordinary speech of Bengal into poetic form.  He had had intimate contact with village life in Bengal early in his life as his family had estates with many villages.  Later in 1922 he created a center for rural development and reform “Sriniketan” along side an innovative school “Santiniketan” started in 1901.

He turned his observations of Bengali life into songs, over 2000 songs, each change of season, each aspect of Bengal landscape, every sorrow and joy found a place in his songs which became Bengali “folk music”.

The third current was national.  As Tagore wrote “The national was not fully political, but it began to give voice to the mind of the people, trying to assert their own personality.  It was a voice of indignation at the humiliation constantly heaped upon us by people.”  Tagore was the first to make popular the term of ‘Mahatma’ for Gandhi.  “So disintegrated and demoralized were our people that many wondered if India could ever rise again by the genius of her own people, until there came on the scene a truly great soul, a great leader of men, in line with the tradition of the greatest sages of old — Mahatma Gandhi.  Today no one need despair of the future of the country, for the unconquerable spirit that creates has already been released.  Mahatma Gandhi has shown us a way which, if we follow, shall not only save ourselves but may also help other peoples to save themselves.”

Tagore was concerned with the relationship between the local, such as Bengali culture which needed revitalization and deepening and the universal — the quest for a new humanism. We see this process in his concern with education and in his correspondence with the Italian educator Maria Montessori, who was living in India during the Second World War.

Rabindranath Tagore was born into the leading family of the Bengal Renaissance, at a time when Bengali intellectuals were evaluating the merits of European civilization and the role of the British in India.  We find him first expressing his concerns over the reigning educational system in a public address in 1892, entitled “Discrepancy in Education”. He put forth the case of the undernourished Bengali child, confined to a school bench to study a foreign curriculum taught in English by an instructor, who himself was incompetent in the language.  In Tagore’s portrayal, Bengali children were made to endure physical abuse and unending schoolwork in a foreign language in order to pass rigid exams to qualify for a job in the most rapid manner possible.  He set out a number of alternatives: the need for pleasurable learning in an atmosphere of mental and physical freedom; the need for a linguistic medium that is integral with a child’s social and cultural environment; the importance of accessible well-educated teachers who inspire; the desirability of a multi-cultural curriculum to stimulate critical thought and creative imagination; and the importance of learning directly from nature.”

Maria Montessori (1870-1952), who became the first female M.D. in Italy in 1896, developed her educational insights through work with neglected and retarded children. She developed a system to help children distinguish letters, geometric shapes, colors through tactile materials.  The children were allowed to move freely in the classroom and to progress at their own pace.  She introduced new elements into the curriculum that related closely to the daily life of the child, such a gardening, gymnastics, tending plants and animals, preparing and serving a communal meal.

Tagore and Montessori met in Italy in 1926 and always remained in touch.  In 1934, the Fascist government of Mussolini closed the Montessori schools in Italy as did Hitler in Germany and then in Austria when Hitler’s troops moved into Vienna. Creative thinking among children is seen as a danger by dictatorships — no doubt correctly.

As war come to Europe, Maria Montessori moved to India in 1939. There she had to see how her educational approach could fit into a different culture.  There she and Tagore again met at a time when India was aflame with debate as to the place of Western — basically English — thought in Indian education since many saw that independence was likely to come with the end of World War II.  Tagore had always been concerned by the balance among the local Bengali culture from which he drew inspiration for his poems and songs, the wider culture of India, and the Western culture which shaped the world society.  His was a creative combination of the local and the universal, a world in his words “where the clear stream of reason has not lost its way into the dreary desert sand of dead habit.”

It is not easy to find this right balance between understanding life through knowledge of the local, the national and the universal.  It is a balance which we must all try to develop together. As Tagore emphasized, the creative impulse was rooted in man’s desire to enhance the experiences of life.  Men shared with the Divine Spirit the possibility of shaping the material world as well as his own personality according to the implicit laws of being.  An artist responds to what Tagore named “the call of the real” through reverence, understanding and delight.  An artist is aroused not by knowledge or emotion alone, but by the wholeness of his perception.  The Real is that order which lies behind multiplicity.  “To be able to love material things, to clothe them with tender grace, and yet not be attached to them, this is a great service. The wonder is not that there should be obstacles and sufferings in this world, but that there should be law and order, beauty and joy, goodness and love.”

Anticopyright: Editorials and articles originated on TMS may be freely reprinted, disseminated, translated and used as background material, provided an acknowledgement and link to the source, TMS: Rabindranath Tagore (7 May 1861 – 7 Aug 1941): The Local and the Universal, is included. Thank you.