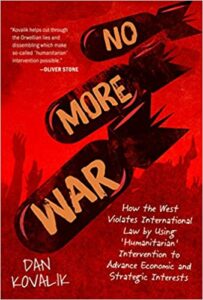 No More War focuses on the one nation in recent times that has been continuously engaged in wars of aggression. In fact, that nation has been engaged in wars or military occupations in all but five years since its founding in 1776. Author and professor of human rights law at the University of Pittsburgh, Dan Kovalik, contrasts international law designed to keep the peace to the contravening ideology of “humanitarian intervention” used to excuse the US imperial project.

Besides being a compelling exposition on US imperial adventures and its epigones, No More War is also a primer for law students and the general public on international law. The two most seminal documents of international law, the Charter of the United Nations and the Statute of the International Court of Justice, are included as appendices.

Kovalik explains that the UN Charter and associated human rights covenants are intended to provide the legal basis to end wars of aggression. In the words of the Nuremberg Justices:

The UN Charter only allows states to use of force for self-defense, and then it must be pursuant to a UN Security Council resolution and with the consent of the host state. Citing numerous examples – Nicaragua, Vietnam, Libya, Syria, Iraq, etc. – Kovalik shows that “nearly every war the US fights is a war of choice, meaning that the US fights because it wants to, not because it must do so in order to defend the homeland.”

Kovalik credits the Soviet Union as having been a check on US interventionism. Since the Soviet Union’s demise in 1991, US interventions have increased. In 2001 on the border of the former Soviet Union, the pursuit of Saudi national Osama bin Laden was the US justification for the invasion of Afghanistan. However, bin Laden never was on the FBI’s most wanted list because of lack of evidence. And since his murder by US Navy SEALS in 2011, the US has continued its war in Afghanistan with no end yet in sight.

Kovalik documents in instructive detail how US intervention is “not about protecting human rights…[but] about profit, power, and imperial domination.” He comments how the US military devastates a country so that US corporations can profit in rebuilding it:

“‘Vulture capitalism’ is indeed too kind a term for this type of creative destruction, for vultures feed on carrion that is already dead; in this case…the US creates the carrion for its corporations to feed on, and at someone else’s expense.”

The obscene oxymoron “humanitarian intervention” is used to contravene international law. No More War makes the case that this concept is neither humanitarian nor has a place in international law. The Uruguan poet and political analyst Eduardo Galeano observed, “Every time the US ‘saves’ a country, it converts it into either an insane asylum or a cemetery.”

Democratic party luminary and former US ambassador to the UN, Samantha Power, is credited with being a major purveyor of the “humanitarian interventionist” justification for US wars of aggression for economic gain and imperial domination. Power, author of  the Pulitzer-awarded A Problem from Hell: America and the Age of Genocide, condemns genocide except when it is committed by its principal perpetrator such as in the US/NATO destruction of Yugoslavia, which transpired on her watch at the UN.

The billionaire-funded so-called human rights groups are also exposed for their ideological service to the US imperial project. Amnesty International has the distinction of being the only major human rights organization failing to condemn apartheid in South Africa or to protest the US designation of Nelson Mandela as a terrorist.

Likewise, Human Rights Watch and especially its director Kenneth Roth are criticized for promotion of the “responsibility to protect” pretext for US aggression.  According to Kovalik, Roth believes “the US, by definition, simply does not commit mass war crimes or genocide. It is only people of the undeveloped world who do such things.” Ajamu Baraka with the Black Alliance for Peace observes, “The ‘responsibility to protect’ is a white supremacist construction – the 21st-century ‘white man’s burden.’”

With leading “human rights” organizations like Amnesty International and Human Rights Watch running cover, it is little wonder that the US is in “almost total denial of international law obligations,” including rejecting the jurisdiction of the International Court of Criminal Justice.

Kovalik’s international perspective describes decolonization as the truly defining international law issue of the 20th century. Peace, Kovalik argues, is a paramount human right upheld in the Universal Declaration of Human Rights and other international covenants.

A consequence of the US “spending more on its military than nearly all the other countries of the world combined” is domestic neglect. Of the developed (i.e., members of the OECD) countries, the US has the highest youth poverty, infant mortality, and incarceration rates. The UN High Commission for Refugees found that conditions in Syrian refugee camps were better than those for the homeless in Los Angeles (now numbering nearly 60,000 in LA County).

Kovalik entreats, “from a moral and legal point of view, going to war to defend imperial domination of other nations is not defensible and must be resisted.” Revealing is this brazen confession by New York Times columnist Thomas Friedman:

“For globalism to work, America can’t be afraid to act like the almighty superpower that it is…The hidden hand of the market will never work without a hidden fist – McDonald’s cannot flourish without McDonnell Douglas, the designer of the F-15. And the hidden fist that keeps the world safe for Silicon Valley’s technologies is called the United States Army, Air Force, Navy, and Marine Corps.”

To which, former New York Times columnist Chris Hedges observes, “We have, as always happens in war, become the monster we sought to defeat.”

No More War is not a rant. Given his meticulous presentation of the particulars of US imperialism, Kovalik’s insightful critique is restrained, allowing the facts to speak for themselves. Kovalik concludes, “the American people are much more in tune with the spirit of international law than their rulers, and it is because this law, borne of human experience, simply makes sense.”

Roger Harris is a member of the TRANSCEND Network and the immediate past president of the Task Force on the Americas, a 33-year-old human rights organization in solidarity with the social justice movements of Latin America and the Caribbean. He is active with the Campaign to End US-Canadian Sanctions against Venezuela and is on the state central committee of the Peace and Freedom Party, the only ballot-qualified socialist party in California. He recently visited Syria for an international conference on the impacts of economic sanctions by the US and its allies on over 30 countries in the world.

Anticopyright: Editorials and articles originated on TMS may be freely reprinted, disseminated, translated and used as background material, provided an acknowledgement and link to the source, TMS: U.S. Uses “Humanitarian Intervention” to Advance Economic and Strategic Interests, is included. Thank you.

One Response to “U.S. Uses “Humanitarian Intervention” to Advance Economic and Strategic Interests”