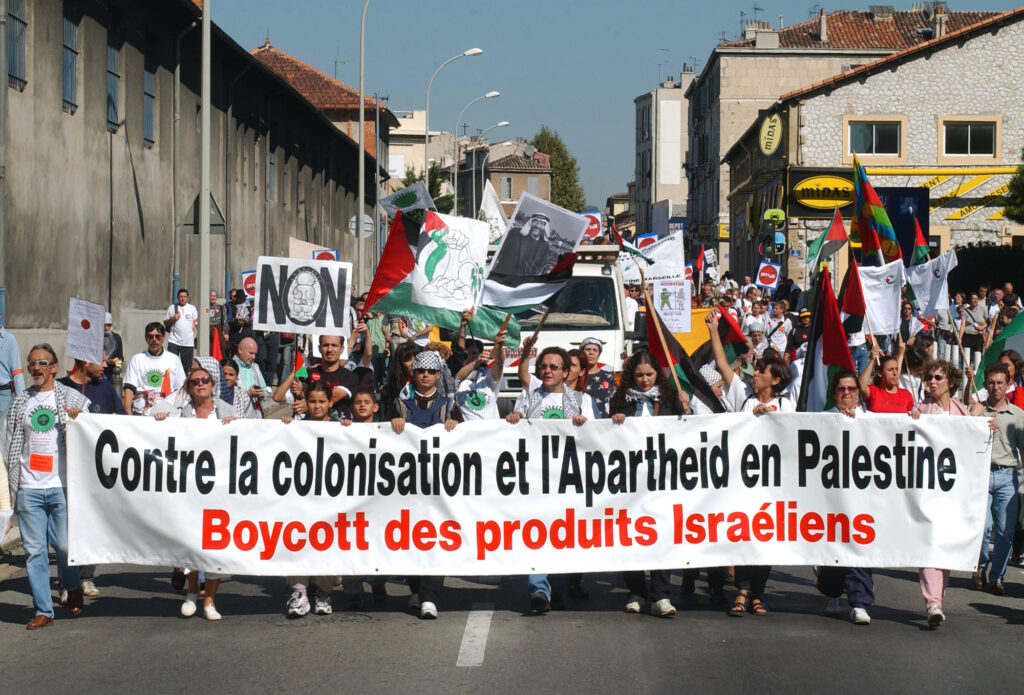 Demonstrators holding a banner reading “Against colonization and apartheid in Palestine, Boycott of Israeli products,” march through the northern district of Marseille, southern France, during an international demonstration in support of the Palestinians. (AP Photo/Claude Paris)

Reacting to the breaking news, Rita Ahmad from the Palestinian-led BDS movement said:

This momentous court ruling is a decisive victory for freedom of expression, for human rights defenders, and for the BDS movement for Palestinian freedom, justice and equality. It confirms a 2016 European Union position defending the right to call for BDS against Israel to achieve Palestinian rights under international law.

This is a major legal blow to Israel’s apartheid regime and its anti-BDS lawfare. At Israel’s behest, European governments, especially in France and Germany, have fostered an ominous environment of bullying and repression to silence Palestine solidarity activists.

The ECHR decision comes at a time of widespread condemnations of Israel’s plans to formally annex large swathes of the occupied Palestinian territory. In response to these plans and to Israel’s ongoing “apartheid regime” and “de facto annexation,” Palestinian civil society has reminded states of their obligations to adopt “lawful countermeasures,” including a ban on “arms trade and military-security cooperation with Israel” and on trade with Israel’s illegal settlements.

In 2009 and 2010, eleven activists in France had participated in peaceful protests inside supermarkets calling for a boycott of Israeli goods in solidarity with the Palestinian struggle for freedom, justice and equality. They were convicted by French courts of “incitement to discrimination.”

At a time when European citizens, inspired by the Black Lives Matter uprising in the US, are challenging the ugly legacy of European colonialism, France, Germany and other EU countries must end their racist repression of human rights defenders campaigning for Palestinian human rights and for an end to Israeli apartheid.

Europe is deeply complicit in Israel’s occupation, siege of Gaza and slow ethnic cleansing of Indigenous Palestinians in Jerusalem, the Jordan Valley and elsewhere. For as long as this complicity continues, BDS campaigns will too.

We salute Palestine solidarity activists in France who, despite the prevalent anti-Palestinian repression, have effectively campaigned against Israeli apartheid and against corporations that are complicit in its war crimes against Palestinians, including AXA, Veolia and Orange.

The Palestinian BDS National Committee is the largest coalition in Palestinian society and the leader of the global, nonviolent BDS movement for Palestinian freedom, justice and equality. The BDS movement rejects all forms of racism and racial discrimination.

The cases concern the complaint by activists in the Palestinian cause about their criminal conviction for incitement to economic discrimination, on account of their participation in actions for boycotting products imported from Israel as part of the campaign “BDS : Boycott, Divestment and Sanctions”.

The applicants are members of the “Collectif Palestine 68”, which is a local relay for the international campaign “Boycott, Divestment and Sanctions” (BDS). This campaign was launched on 9 July 2005 with an appeal from Palestinian non-governmental organisations, one year after the opinion issued by the International Court of Justice which states that “[t]he construction of the wall being built by Israel, the occupying Power, in the Occupied Palestinian Territory, including in and around East Jerusalem, and its associated regime, are contrary to international law”.

On 26 September 2009 five of the applicants took part in an action inside the [C.] hypermarket in Illzach, calling for a boycott of Israeli products, organised by the “Collectif Palestine 68”. They displayed the articles which they considered to be of Israeli origin in three trolleys so that they could be seen by customers, and handed out leaflets. A similar event was organised by the “Collectif Palestine 68” on 22 May 2010 in the same hypermarket. Eight of the applicants were involved. They also presented a petition to be signed by hypermarket customers, inviting the hypermarket to stop selling products imported from Israel.

The Colmar public prosecutor summoned the applicants to appear before Mulhouse Criminal Court for, inter alia, incitement to discrimination, which offence is provided for in section 24(8) of the Law of 29 July 1881.

As regards the incidents on 26 September 2009, the Court of Appeal imposed on each of the five accused a suspended fine of EUR 1,000 and ordered them to jointly pay each of the four admissible civil parties (the International League against Racism and Antisemitism, the Lawyers without Borders association, the “Alliance France-Israël” association and the “Bureau national de vigilance contre l’antisémitisme”) EUR 1,000 in respect of non-pecuniary damage and EUR 3,000 on the basis of Article 475-1 of the Code of Criminal Procedure (civil party expenses not defrayed by the State).

Concerning the incidents of 22 May 2010, the Court of Appeal imposed on each of the nine accused a suspended fine of EUR 1,000 and ordered them to jointly pay three of the civil parties (the International League against Racism and Antisemitism, the Lawyers without Borders association, the “Alliance France-Israël” association), each, EUR 1,000 in respect of non-pecuniary damage and EUR 3,000 on the basis of Article 475-1 of the Code of Criminal Procedure (civil party expenses not defrayed by the State).

By two judgments of 20 October 2015 the Criminal Division of the Court of Cassation dismissed the appeals on points of law lodged by the applicants, who had alleged, in particular, a violation of Articles 7 and 10 of the Convention. It found inter alia that the Court of Appeal had justified its decision since it had rightly noted that the constituent elements of the offence laid down in section 24 (8) of the Law of 29 July 1881 had been made out and that the exercise of freedom of expression, set out in Article 10 of the Convention could, pursuant to paragraph 2 of that provision, could be subject to restrictions or sanctions which were, as in the present case, measures necessary in a democratic society for the prevention of disorder and the protection of the rights of others.

Relying on Article 7 (no punishment without law) of the Convention, the applicants complain that they were convicted on the basis of section 24(8) of the Law of 29 July 1881 on freedom of the press of incitement to economic discrimination, whereas that text did not cover economic discrimination. Relying on Article 10 (freedom of expression), they complain of their criminal conviction on account of their participation, in the context of the BDS campaign, in actions calling for a boycott of articles produced in Israel.