A daughter observed her mother prepare a Christmas ham. Before she put it in a pot in the oven, she cut off a piece on the left and right and threw them into the garbage. The daughter asked her mother why she did this. “My mother has always done it that way,” was her reply.

They were curious and went to see Grandma and asked her why she always cut off a piece of ham on the left and right before putting it in the oven. Her reply was the same, “Because my mother has always done it that way.”

Great-Grandma, over 90, was still alive in a retirement home. They visited her and asked her, “Why did you always cut off a piece of ham on the left and right before putting it in the oven?” She explained, “Because my pot was too small!”

We often follow traditions, even if they are no longer appropriate, having forgotten why. 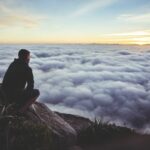 Anticopyright: Editorials and articles originated on TMS may be freely reprinted, disseminated, translated and used as background material, provided an acknowledgement and link to the source, TMS: Family Tradition, is included. Thank you.