In the West: Propaganda, Hysteria and Truly Foul Breath! 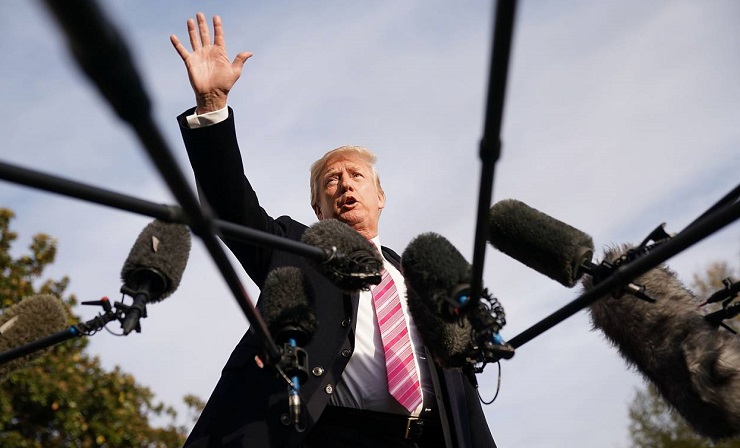 26 May 2020 – If it wasn’t so tragic, it would be laughable: the political brigands in US and Europe are fuming, spitting and rolling their eyes upwards towards the ceiling. They are pointing fingers in all directions, shouting incoherently “China!”, “Russia!”, “Venezuela and Cuba!”, “Iran!”; “You, You, YOU!”.

China and Russia are quietly building a new world, which includes brand new infrastructure, factories and entire neighborhoods for the people. Hospitals are being constructed, and so are universities, parks, concert halls and public transportation networks. Both countries are doing all this quickly and noiselessly, and with great determination. And despite sanctions and embargos, they never shout back at the salivating, angry mouths of the Western gurus of brainwashing.

The difference between the West and the two mighty allies in the East, is enormous. In fact, it is not a difference, but an outright contrast.

It is not that China and Russia are perfect countries. No. Perfection is depressing and it is aimed at by religious fanatics and (thank God, unsuccessfully), by fashion magazines. I don’t even know what it really means, philosophically – perfection.

What I do know is that in both China and Russia, people come first. Their standards of living are at the center of almost all the efforts of the planned economies. Beijing and Moscow and most of their bureaucracies exist so that the people live longer, better, and have more meaningful lives. The cities and villages are designed for citizens to become more educated, healthier, while enjoying a deeper cultural life.

Visiting Russia, from Vladivostok to Kaliningrad, as well as China, from Guangzhou to Urumqi; it is clearly visible, undeniable.

Western mass media and Western governments stopped asking all the basic questions, and preventing others from asking them publicly. Questions like: “What do we really want from life?” “What are we scared of?” “What kind of society do we want to live in?”

Say, seriously: do you really, really want to live in a country, where you and your family could drive the latest Maserati or Lamborghini, on some road which is surrounded by infested slums? Do you? Do you want to shop in malls where the toilets are decorated in marble and with gold-plated faucets, while people are dying, just a 100 meters away, without basic sanitation and decent medical care?

Do you want to live in a bubble or your tiny country which is doing damn well, simply because it used to colonize some enormous territories, and continues to colonize them, indirectly, to this very moment? Or in a country which prides itself on never colonizing anybody directly, but which has been “investing” in Western expansionism for decades and centuries. Notice, this time I am not naming names, not pointing fingers. I let the reader fill in the blanks.

Call me naïve, but I always thought that most people want to live secure lives, full of knowledge and culture, without the fear of falling ill, of crime waves which grow from misery, without the pre-occupation of how they are going to pay for the roof above their head, tomorrow and in one month, or even in ten years.

How many people in the West are scared, petrified? I am talking about unnecessary fears; fears that could be easily eliminated? How many are depressed, even desperate; suicidal, on poisonous pills which they are given, so they can pull themselves through the day?

And how many people in the neo-colonies are living in absolute destitution; in Africa and the Middle East, in Latin America, Asia and Oceania?

Is it all necessary? Isn’t it all totally absurd?

The mass media and academia in the West and in its colonies are now serving the regime, which mainly consists of corporations and their PR facades – so-called elected governments.

The way the Western political system functions, is hardly ever addressed. Again, no big questions are asked. Including one of the most essential ones: “Why most of the people in North America and Europe who despise their own system, keep electing the same individuals and parties that they say they hate? How come they keep being tricked into the weaving of their own nooses?”

Is this really, really freedom and democracy?

In Russia and China, people are much more content with the systems they have.

People are also, almost always, much more content with the revolutionary systems they fought for and won, in countries like Venezuela and Cuba, Iran and Bolivia before the West decided to take them, brutally and unceremoniously, away from them. Of course, if terrible sanctions are imposed, or even embargoes; if assassination plots and terrorist attacks are unleashed by Western mercenaries and their allies, life cannot be happy, balanced and enjoyable. Just look at Syria. But it is not the fault of socialism or Communism, it is not a fault of the systems which are different, is it?

Frankly: no true Communist or socialist system has had even a chance to bloom, or to develop itself, uninterrupted. They have always been attacked, brutalized and broken into pieces by the Western armies, interests, allies or mercenaries.

It is because all Communist systems fought with determination against colonialism, imperialism and plunder.

It would be interesting to see what would happen, if there were to be no intervention, no smearing campaigns, no embargos and no war. Perhaps most of the Communist countries would flourish?

And yet, despite all this horror imposed by the West, China and Russia are blooming.

North America and Europe are in panic. They are literally shaking. Their elites are in total overdrive, trying to invent new formulas, new insults, to stain the two global frontrunners.

The greatest fear they have is: what if the rest of the world were to notice? What if some countries were to begin switching sides, alliances. And some countries are doing precisely that! Everything is suddenly changing, evolving. Things are now being discussed, in the Philippines and Mexico, in Kenya and in so many other places.

Most of the people in the colonized countries are still too scared to dream. They do not dare to believe that another world is possible; that attempts to build a much better planet would not be drowned in those proverbial bathtubs of blood, again. Many are like hostages kept in a filthy cellar for years, unaccustomed anymore to the rays of the sun, living in constant fear. Stockholm syndrome seems to be omnipresent.

Can huge and undeniably successful nations, like China and Russia, be absolutely, totally wrong? Can they be thoroughly evil? Reading the Western media, listening to government officials in North America and Europe, they are precisely that: deceitful, sinister and dangerous for their own people, and for the world.

There is absolutely nothing positive that is written (in the West) about nations which decided, or were forced to, embark on their own path: China, Russia, but also North Korea, Syria, Iran, Venezuela, Cuba, even South Africa.

They are facing a barrage of negativity, cynical punches and insults. Every success is questioned and belittled. Almost every news story is introduced with a sarcastic question mark. Leaders are mocked.

In the West, journalism has virtually died. Thousands of scribes are unleashed by their corporate media outlets, to search for the “darkest secrets” inside China, Russia, and other non-Western countries. Positive stories are allowed to be highlighted only if they occur in the West, or in the neo-colonies of the Western Empire.

All this is because the regime is desperately fighting for its survival. Because it cannot inspire anyone, anymore. It cannot offer optimism, or to motivate with enthusiastic ideals. Smearing its opponents is “the best it can do”.

Russia and China cannot compete with the propaganda machinery of the West. And they do no try to, anymore. They used to, but they gave up, quite some time ago.

Instead, they are developing new social concepts for their people, working on implementing an Ecological Civilization, on improving the standards of living for all.

Instead of quarreling, pointing fingers and insulting opponents, Russia and China are marching forward, irreversibly.

This confident march is what will, most likely, save humanity from imminent collapse, from the terrible agony of cannibalism, which is promoted as “democracy” and “freedom” by the Western market fundamentalism and a brutal dictatorship of the 1%.

China and Russia may not be perfect, but what is happening in the West is monstrous.

What is happening in the West’s new type of colonies is simply a crime against humanity, from West Papua to the Middle East, the Democratic Republic of Congo, and present-day Brazilian Amazonia, to name just a few thoroughly plundered, ruined parts of the world.

And there is total silence, when it comes to these crimes. The Western media is silent, obedient and disciplined.

The ruined, injured parts of the world are quietly levitating towards both Russia and China. They suffered enormously, for decades and centuries. They have no tears left in their eyes, anymore; no blood in their veins. They do not read propaganda sheets. They are scarred, hungry and ill. They need to survive, they need a lifeline, quickly. They need a strong, determined arm to lean on.

Russia and China are there, ready to help. Now, immediately, unconditionally.

And they know it – in London, Washington, Paris, Berlin, Canberra, Ottawa! They know it, and they do all they can to stop the process. To silence the victims. To keep control over the world. To keep looting. To decide who should live and who should die, when and how.

It is not a good life. Not good at all. For the planet, even for the majority of people in the West.

Big questions have to be asked; essential ones.

Russia, China, Iran, Venezuela, Cuba – they are asking and answering those questions, not always by words, but by building their own societies, often against all odds.

The louder the Western propagandists scream, the clearer it is that they are scared. Deep inside they know that they are wrong, and that their days are numbered.

I do not even have to write about COVID-19 in this essay. Many people that are reading these lines are well aware of the horrific failure and disgraceful lack of solidarity in the West.

Next time, when you hear loud shouts and insults, smell terribly bad breath, and see finger-pointing towards Russia and China, find a chair, sit down, and calmly, very calmly ask yourself at least few basic questions:

“Is this the world in which I want to live?”

“If the world in which I live scares me, frustrates me, makes me unhappy, why should I trust its ideologues and propagandists?”

“Perhaps the reason why the Western rulers hate, despise and fear countries like Russia and China, is because they are actually doing something essentially good for our planet and the people! If they do, shouldn’t I support them?”

Andre Vltchek is a philosopher, novelist, filmmaker and investigative journalist. He covered wars and conflicts in dozens of countries. His latest books are: “Exposing Lies Of The Empire” and “Fighting Against Western Imperialism”. Discussion with Noam Chomsky: On Western Terrorism. Point of No Return is his critically acclaimed political novel. Oceania – a book on Western imperialism in the South Pacific. His provocative book about Indonesia: “Indonesia – The Archipelago of Fear”. Andre is making films for teleSUR and Press TV. After living for many years in Latin America and Oceania, Vltchek presently resides and works in East Asia and the Middle East. He can be reached through his Email: andre.vltchek.readers@gmail.com or his Twitter. Website: http://andrevltchek.weebly.com/