Must the United States Demonise China?

Simply existing as a prosperous power is enough to make China an enemy, which must be isolated, contained, if not destroyed, like a disease. Hong Kong is but another factor in this hegemonic calculus. 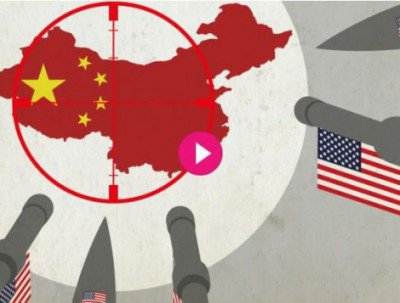 26 Jun 2020 – “She goes not abroad, in search of monsters to destroy. She is the well-wisher to the freedom and independence of all. She is the champion and vindicator only of her own. She will commend the general cause by the countenance of her voice, and the benignant sympathy of her example. She well knows that by once enlisting under other banners than her own, were they even the banners of foreign independence, she would involve herself beyond the power of extrication, in all the wars of interest and intrigue, of individual avarice, envy, and ambition, which assume the colours and usurp the standard of freedom.

“The fundamental maxims of her policy would insensibly change from liberty to force … She might become the dictatress of the world. She would be no longer the ruler of her own spirit …” – John Quincy Adams, 1821

America has always needed an enemy. China is but the latest in a long series of “monsters” in need of destruction. What Adams, the sixth US president, famously warned against has long ago become the blueprint for the United States’ engagement with the world.

Every post-war president, including Donald Trump, went into office trying to follow Adams’ wise advice but ended up doing the opposite. When you have a democracy, public opinion must be managed or manufactured.

When you run a national security state, you must control your own citizens domestically and use all your powers, hard, soft and sharp, to bring to heel allies and rivals alike. Disobedience demands punishment, which can range from relatively bloodless sanctions to outright invasion and war.

When your military is deployed in more than 150 countries in a world that has fewer than 200, you are running a global empire, regardless of what fanciful claims you make to justify their worldwide presence. Simply existing as a rising power – like China – is enough to make someone an enemy, which must be isolated, demonised, contained, if not destroyed. Hong Kong is but another factor in this hegemonic calculus.

But to create an enemy, your opposing entity has to behave like one, or openly declare itself as one. Here’s the problem for Washington. China doesn’t want to be an enemy.

That’s why frustrated American politicians are poking and provoking Beijing at every opportunity. China has so far refused to take the bait. But for how long? The answer to that question will determine the war and peace, and poverty and prosperity, of this century.

Recommended for You: China and Britain in War of Words over Hong Kong