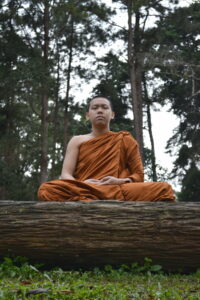 A Buddhist monk had a great talent as a painter, but he always demanded a down payment before he began to paint, and charged high prices. So he was known as the greedy monk.

Once a geisha sent for him to paint for her. When he arrived, she was with a customer. He asked his usual question, “What will you pay?” She said, “Any amount you name, but you have to paint right here and now.” So he mentioned the highest sum he had ever received for a painting. She agreed, he painted a beautiful flower arrangement and collected the money.

The geisha said to her customer, “He has talent, but how can you display the painting of such a greedy, ugly man. It is just good enough for my underwear.” With that, she threw one of her under robes towards him and asked him to paint on it. He did, and again collected a handsome amount.

Later, people found out why this monk had been apparently so greedy. The poor people in his home province suffered from hunger and the rich refused to help them. So he used the money he earned by painting to build granaries, buy grain and distribute it to the poor in times of famine. Nobody in his province ever knew who the benefactor was. People tend to see in others what their prejudices tell them.

Anticopyright: Editorials and articles originated on TMS may be freely reprinted, disseminated, translated and used as background material, provided an acknowledgement and link to the source, TMS: The “Greedy” Monk, is included. Thank you.