How to Prevent the Looming Sovereign-Debt Crisis

From Latin America’s lost decade in the 1980s to the more recent Greek crisis, there are plenty of painful reminders of what happens when countries cannot service their debts. This column argues that a global debt crisis today would likely push millions of people into unemployment and fuel instability and violence around the world, and proposes a multilateral sovereign debt buyback facility which could be managed by the IMF. 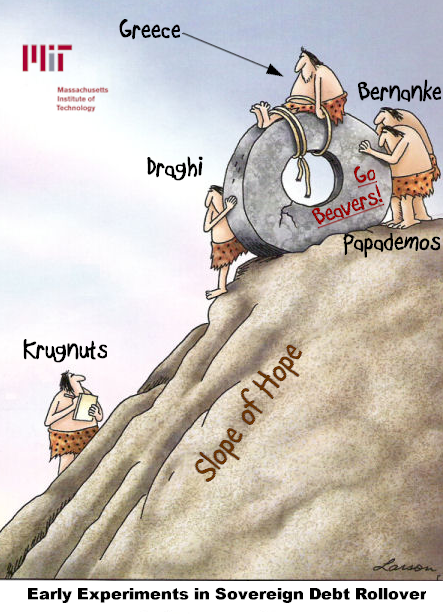 3 Aug 2020 – While the COVID-19 pandemic rages, more than 100 low- and middle-income countries will still have to pay a combined $130 billion in debt service this year – around half of which is owed to private creditors. With much economic activity suspended and fiscal revenues in free fall, many countries will be forced to default. Others will cobble together scarce resources to pay creditors, cutting back on much-needed health and social expenditures. Still others will resort to additional borrowing, kicking the proverbial can down the road, seemingly easier now because of the flood of liquidity from central banks around the world. (For a summary of early work focusing on COVID-19 in developing and emerging economies, see Djankov and Panizza 2020).

From Latin America’s lost decade in the 1980s to the more recent Greek crisis, there are plenty of painful reminders of what happens when countries cannot service their debts. A global debt crisis today will push millions of people into unemployment and fuel instability and violence around the world. Many will seek jobs abroad, potentially overwhelming border-control and immigration systems in Europe and North America. Another costly migration crisis will divert attention away from the urgent need to address climate change. Such humanitarian emergencies are becoming the new norm.

This nightmare scenario is avoidable if we act now. The origins of today’s looming debt crisis are easy to understand. Owing to quantitative easing, the public debt (mostly sovereign bonds) of low- and middle-income countries has more than tripled since the 2008 global financial crisis. Sovereign bonds are riskier than ‘official’ debt from multilateral institutions and developed-country aid agencies because creditors can dump them on a whim, triggering a sharp currency depreciation and other far-reaching economic disruptions.

Back in June 2013, we worried that “shortsighted financial markets, working with shortsighted governments” were “laying the groundwork for the world’s next debt crisis” (Stiglitz and Rashid 2013). Now, the day of reckoning has come. This past March, the United Nations called for debt relief for the world’s least-developed countries. Several G20 countries and the IMF have suspended debt service for the year and have called upon private creditors to follow suit.

Unsurprisingly, these calls have fallen on deaf ears. The newly formed Africa Private Creditor Working Group, for example, has already rejected the idea of modest but broad-based debt relief for poor countries.1 As a result, much, if not most, of the benefits of debt relief from official creditors will accrue to the private creditors who are unwilling to provide any debt relief.

The upshot is that taxpayers in creditor countries will once again end up bailing out excessive risk taking and imprudent lending by private actors. The only way to avoid this is to have a comprehensive debt standstill that includes private creditors. But without strong action from the countries in which debt contracts are written, private creditors are unlikely to accept such an arrangement. These governments therefore must invoke the doctrines of necessity and force majeure to enforce comprehensive standstills on debt service.

But standstills will not solve the systemic problem of excessive indebtedness. For that, we urgently need deep debt restructuring. History shows that for many countries, a restructuring that is too little, too late merely sets the stage for another crisis. And Argentina’s long struggle to restructure its debt in the face of recalcitrant, shortsighted, hard-headed, and hard-hearted private creditors has shown that collective-action clauses designed to facilitate restructuring are not as effective as had been hoped.

More often than not, an inadequate restructuring is followed by another restructuring within five years, with enormous suffering on the part of those in the debtor country. Even creditors lose, over the long run.

Fortunately, there is an underused alternative: voluntary sovereign debt buybacks. Debt buybacks are widespread in the corporate world, and have proved effective both in Latin America in the 1990s and, more recently, in the Greek context. And they have the advantage of avoiding the harsh terms that typically come with debt swaps.

A buyback programme’s principal objective would be to reduce debt burdens by securing significant discounts (haircuts) on the face value of sovereign bonds, and by minimising exposure to risky private creditors. But a buyback programme could also be designed to advance health and climate goals, by requiring that the beneficiaries spend the money that otherwise would have gone to debt service on creating public goods.

As we explain in new CEPR Policy Insight (Stiglitz and Rashid 2020), a multilateral buyback facility could be managed by the IMF, which can use already available resources, its New Arrangements to Borrow function, and supplemental funds from a global consortium of countries and multilateral institutions. Countries that do not need their full allocation of Special Drawing Rights (the IMF’s unit of account) could donate or lend them to the new facility. A new issuance of SDRs, for which there is a clear need, could provide still additional resources. To ensure the maximum debt reduction for a given expenditure, the IMF could conduct an auction, announcing that it will buy back only a limited amount of bonds.

In the long term, a predictable, rules-based debt-restructuring mechanism, modelled after the United States’ municipal bankruptcy legislation (‘Chapter 9’), is needed. That would be in keeping with the recommendations of the post-2008 UN Commission of Experts on Reforms of the International Monetary and Financial System.

The usual objection to such proposals is that they would destroy the international capital market. But experience shows otherwise. One can’t squeeze water from a stone. There will be restructuring – the only question is whether it will be orderly. Our proposals would aid in achieving this objective, and thus strengthen capital markets.

Ultimately, though, our concern should not be with the health of capital markets, but with the welfare of people in developing and emerging-market countries. There is an urgent need for debt relief now, in the midst of the pandemic. It has to be comprehensive – including private creditors – and more than just a stay of debt. We have the tools to do it. We only need the political will.

Authors’ note: The views expressed here are the authors’ own and do not reflect the views of the United Nations or its member states.