21 Aug 2020 – Israeli warplanes bombed the besieged Gaza Strip for an eighth successive night Tuesday in response to the launching of dozens of incendiary balloons and rockets into southern Israel by Palestinian militants.

The airstrikes and drone attacks came as Israel threatened Hamas, the Islamist group that rules the besieged Palestinian enclave, that it was risking “war” by failing to stop the balloons. The balloons have caused small fires, no casualties and almost no damage.

The Israeli airstrikes, which according to military sources, targeted “a military base, underground infrastructure and observation posts belonging to the Hamas terror group,” included Hamas observation posts near al-Maghazi and al-Bureij refugee camps and the southern town of Khan Younis. 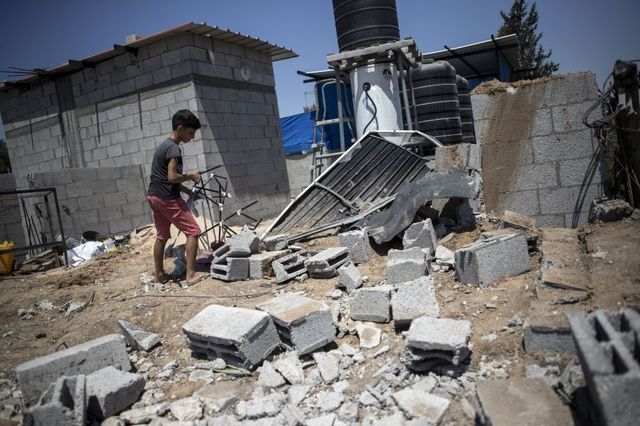 They also hit a United Nations-run elementary school in al-Shati refugee camp in Gaza City, where around 1,000 children were present. There were no reports of casualties.

On August 18, Prime Minister Benjamin Netanyahu insisted that his government would make no distinction between rockets and airborne arson attacks by balloons, warning that “There could be another major flareup.”

Benny Gantz, Israel’s defense minister and deputy prime minister, warned, “Hamas is playing with fire, and I will make sure it turns on them.”

On Tuesday, President Reuven Rivlin, on a visit to southern Israel to talk with firefighters, said, “Terrorism using incendiary kites and balloons is terrorism just like any other.” He added, “Hamas should know that this is not a game. The time will come when they have to decide… If they want war, they will get war.”

Israel’s politicians are preparing for war on the besieged Palestinian enclave, even as they up the ante against Hezbollah in Lebanon in the wake of the devastating Beirut port blast, and against its primary target, Iran, threatening a wider conflagration.

The continuous outbreaks of violence are the inevitable byproduct of the 13-year-long Israeli siege of Gaza that has turned the enclave into an open-air prison for its two million inhabitants.

The siege—aided and abetted by Egypt and the Palestinian Authority—has devastated Gaza’s economy, limiting the entry of food, pharmaceuticals and essential commodities as well as access to basic services. Also blocked is the flow of construction materials needed to rebuild Gaza’s infrastructure, much of which was damaged or destroyed in Israel’s murderous assaults in 2008-09, 2012 and 2014.

Living conditions in Gaza are atrocious. Half the population is unemployed, and poverty is endemic. A 2012 UN report predicted that Gaza would become uninhabitable by 2020, given the extreme overcrowding, collapsed infrastructure, lack of electricity and water, and the poor sanitary conditions. Gaza needed 1,000 more doctors. Conditions have further deteriorated after Washington cut off all US aid to the Palestinians through its funding of the UN Relief and Rehabilitation Agency (UNRRA).

In January, the Israeli rights group B’Tselem described the unprecedented health crisis in Gaza, as its barely functioning hospitals try to deal with the horrendous injuries and amputations inflicted on the Palestinians by Israel’s armed forces during the weekly “Great March of Return” that started two years ago.

As yet, Gaza has been spared the worst of the COVID-19 pandemic, having reported 81 cases and one death, with none due to community transmission, thanks to its isolation. But the lockdown has exacerbated the economic hardship and suffering.

Eighty percent of Gazans already rely on humanitarian aid, with the World Bank expecting poverty in Gaza to increase from 53 percent to 64 percent due to cuts in public sector wages across the Palestinian Territories and the impact of the lockdown restrictions.

Israel has rejected numerous international calls, including from Nickolay Mladenov, the UN Special Coordinator for the Middle East Peace Process, a European Parliamentary delegation, and Israeli High Court Justice Elyakim Rubenstein, for it to ease the blockade in the light of the pandemic.

Michael Lynk, UN Special Rapporteur for human rights in the Palestinian territories, stressed, “The legal duty, anchored in Article 56 of the Fourth Geneva Convention, requires that Israel, the occupying power, must ensure that all the necessary preventive means available to it are utilized to ‘combat the spread of contagious diseases and epidemics.’”

With no future in Gaza, particularly for its young graduates, 32 percent of Palestinians said they want to emigrate because of the economic, political, and social situation, according to a recent poll.

The recent escalation in rocket and incendiary balloon attacks followed accusations by Hamas that Israel had failed to implement an agreement reached in October 2018. The deal was aimed at easing the blockade and stipulated the establishment of two industrial zones east of Gaza City to create jobs for tens of thousands of unemployed Palestinians. The agreement also included electricity and water projects, as well as projects aimed at increasing the volume of Gaza’s imports and exports.

On August 12, Gantz halted fuel transfers into Gaza, restricted its fishing zone to eight nautical miles from 15, and halted all transfer of goods through the Erez land crossing. This has forced Gaza’s only power station to stop producing electricity, reducing the Palestinians’ already meagre daily power supply of 8 to 12 hours to just 3 or 4 hours, amid the intense heat of summer. Gaza’s only remaining source of electricity is that supplied directly by Israel. Egypt stopped providing electricity in February.

The International Committee of the Red Cross warned that this would create problems for Gaza’s limited and ill-equipped hospitals and access to a clean water supply. The Gaza Neonatal Network said that the frequent electricity outages were threatening the lives of more than 100 newborn babies currently in intensive care incubators.

The latest attack on Gaza has been spurred on by the protracted political crisis in Israel, where the fractious coalition of Netanyahu’s far right Likud bloc and Gantz’s Blue and White party, formed after three inconclusive elections within a year, could blow apart. This could set the stage for fresh elections if the Knesset fails to agree a two-year budget by Monday.

There is increasing opposition within the country to the economic fallout of the COVID-19 pandemic that has seen unemployment rise to 21 percent, the government’s failure to provide PPE for its nurses and medical and social workers—who have taken strike action in support of their demands—and the reopening of schools that has led to an increase in infections. Among the most economically unequal advanced economies in the world, Israel has one of the highest poverty rates within the Organization for Economic Cooperation and Development.

For Netanyahu, who faces weekly protests calling for him to step down in the wake of his indictment on charges of bribery, corruption, and breach of trust in three separate cases, a war would provide a convenient mechanism for deflecting immense social tensions outward.

The air strikes come in the wake of the US-brokered deal between the United Arab Emirates and Israel, aimed at cementing an alliance with the Sunni Arab states against Iran. Hamas, along with Hezbollah in Lebanon, is routinely portrayed as part of Iran’s “destabilizing presence” in the region.

Amid the orchestrated demands for Hezbollah to be removed from its government role—based on blaming the Shia group for the explosion that devastated Beirut—Israel, backed by the US, is demanding that the mandate for UNIFIL, the United Nations Interim Force in Lebanon, either be changed or ended at an upcoming UN Security Council vote on August 31. Washington maintains that it must stop Hezbollah from violating UN Resolution 1701 by attacking Israel or give way to another military policing force. Eugene Kontorovich, director of international law at the Jerusalem-based Kohelet Policy Forum, told Germany’s Algemeiner that UNIFIL “serves as Hezbollah’s de facto human shield, limiting the [Israel Defense Forces] freedom to manoeuvre in a potential conflict.”