Judaism, the Israeli-Palestinian Conflict and Me

As the conflict with the Palestinians has become more entrenched, so has the division grown between Israel’s Jews. 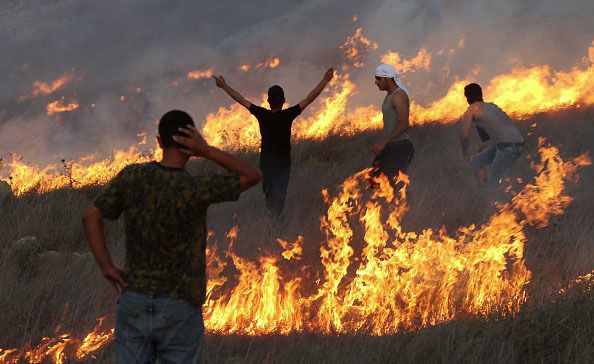 Livelihoods in Flames: Palestinians stand amid blazes set by settlers to their olive groves in a West Bank settlement known as a bastion for settler extremists. Getty Images

26 Aug 2020 – I am very ambivalent toward religion in general and toward Judaism in particular. There is a direct connection between my attitude toward Judaism and religious Jews and their treatment (in general) of the Israeli-Palestinian conflict, Arabs, the Land of Israel, democracy, human rights including freedom of religion and freedom from religion, and their attitude toward me as a non-believing Jew.

As we move away from the possibility of a peace agreement between us and the Palestinians, as Israeli control of the West Bank deepens, I have moved further away from the feeling that we all belong to the same people. This makes me very sad.

I immigrated to Israel from the United States at the age of 22 out of a strong Zionist feeling and a belief in belonging to the Jewish people and the Land of Israel.

Since I was very young, I have heard stories about my great grandfather, Rabbi Yehuda Rosenblatt, who immigrated to Israel in the 1920s in order to die in the Holy Land. He was a haredi (ultra-Orthodox) rabbi who left family and home to live the end of his life in the Land of Israel. He is buried in Nahalat Yitzhak in Tel Aviv.

Since I came here 42 years ago, I have been working for peace between us and our Palestinian neighbors. In 1981, I created a position for myself in the Education Ministry with the support of education minister Zevulun Hammer and with the full consent of prime minister Menachem Begin. My job was to coordinate educational activities between the Jewish and Arab sectors in Israel.

My first achievement in the position was the publication in the director general’s circular of the ministry in which the he introduced me to the entire educational system, and a call I authored encouraging schools in Israel to participate in educational meetings between schools in both sectors. As soon as it was published, the director of the Department of Religious Schools, Rabbi Yaakov Hadani, issued an official statement that the Jewish religious schools were exempt from participating in meetings with “gentiles.”

I was amazed at the lack of confidence of the head of religious schools in his students and in the education they receive under his supervision. 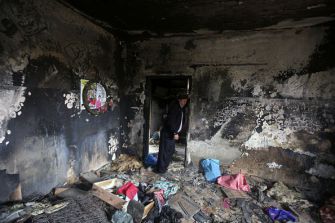 Terrorist Victims: A relative stands inside the burnt-out home of Saad Dawabsha, who was killed alongside his infant and wife when Jewish extremists firebombed their house in the West Bank village of Duma last July.
– Getty Images

MANY YEARS LATER, at the Israel Palestine Center for Research and Information (IPCRI), which I co-directed with a Palestinian colleague for 24 years, I conducted training on peace education for headmasters of yeshiva high schools. In the opening discussion I tried to answer the question: What is peace education?

I understand their position, but I come from another world. I am a stranger in their world and they are strangers in mine. The connection between us seems to belong solely to our past and not to the present.

I have demonstrated for peace and against the occupation for over 40 years. One of the very noticeable things is the lack of kippah-wearers in these demonstrations. This is something that still amazes me even though there is no reason that I should be surprised. Demonstrations by occupation supporters and settlers have almost no heads without kippot.

For years I have witnessed very violent behavior by settlers and soldiers toward Palestinians in the West Bank. The most violent of these acts were committed by religious settlers. They wear kippot and their hatred is burning in their eyes toward Palestinians, and even more toward Jews who come to show solidarity or protect Palestinians. These behaviors push me to move even further away from Judaism.

The Judaism I know is “You were a stranger in the land of Egypt,” “Love your neighbor as yourself,” “We were all created b’Tselem – in God’s image,” and so on. The religious settlers and the violent soldiers full of hatred call me a traitor.

I feel much more loyal to Judaism when I defend the human rights and the lives of others. I feel disdain toward those who, in the name of Judaism, believe that it is kosher to cut down Palestinian olive trees or to expel a shepherd and his flocks from pasture land. Is this Judaism?

In the early 1990’s, Rabbi Ovadia Yosef issued a ruling that the sanctity of the people and the sanctity of life precede the sanctity of the land, and if the evacuation of territories preserves human life (Jews of course) then it is pikuach nefesh (saving lives). This ruling allowed Shas Knesset members to vote in favor of the Oslo Accords. Many religious Jews refer to God’s promise to give the Land of Israel to the Jewish people as a real estate deed. Perhaps in the Court of ma’aleh (in heaven) it has value, but in the reality of life itself, it has no legal validity and it is highly doubtful whether it has moral validity.

ONE OF THE surprises of my life was the big hug I received from the ultra-Orthodox world after many became aware of my part in the release of Gilad Schalit through the direct connection I developed with the leaders of Hamas. The ultra-Orthodox press conducted in-depth interviews with me that appeared in the weekend newspapers and I received many expressions of support from them. To this day, nine years later, people still approach me, mostly ultra-Orthodox who remember me.

On the other hand, Rabbi Moshe Gafni, several years ago at the Haaretz conference, said that he was willing to sit with the leaders of Hamas, with our greatest enemies, but was not willing to sit with a Reform Jew. I am not a Reform Jew but I helped establish a synagogue belonging to the Reform movement in Jerusalem: Kol Haneshema.

I helped establish it because I believe there must be places in Israel where every Jew can pray and feel comfortable; an egalitarian, spiritual and creative place where non-Orthodox Jews can feel at home.

How am I supposed to feel toward a representative of official ultra-Orthodox Judaism in Israel when he says such a sentence? His words ring in my ears to this day.

In the reality of our lives that the more religious you are, the more you link your Israeliness to your Judaism, the less likely you are to support compromise with the Palestinians. Of course, this is not true for everyone and there are exceptions.

Today the ultra-Orthodox public is right wing, and its positions on the Palestinian issue are much more similar to the settlement supporters of the religious-Zionist public than ever before. My tolerance and my connection to Judaism and religious Jews are closely linked to political positions and from my point of view, these positions represent a whole set of values that prove how foreign we are to each other.

This discovery should not shock anyone, but it does require us to be honest with each other and requires us to seek mutual understanding. That does not mean that I have to compromise on my values, because that will not happen. I admit that I feel anti-religious. Despite this I am ready to fight for everyone’s right to live with dignity, to have full equality, and to be a desirable part of this country. Our life together in Israel requires us to know each other, to respect each other, and to live and let live without coercion and without violence.

The writer is a political and social entrepreneur who has dedicated his life to the State of Israel and to peace between Israel and her neighbors. His latest book, In Pursuit of Peace in Israel and Palestine, was published by Vanderbilt University Press. It will soon appear in Arabic in Amman and Beirut.