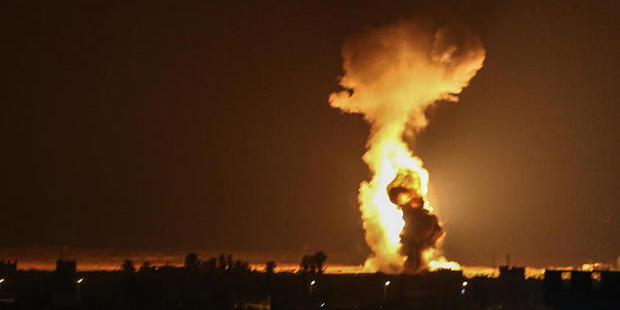 21 Aug 2020 – Israel is bombing Palestine again, although you likely wouldn’t guess that from watching TV news. For the eleventh straight night, Israeli Defense Force warplanes have been bombing the densely populated Gaza Strip. Israel’s bombs have caused considerable damage, forcing the shutdown of the area’s only power plant.

But US corporate media, focused on the coronavirus and election coverage, have shown little interest in the renewed violence in the Middle East. Searching for “Gaza” on the websites of NBC News, CNN, MSNBC and PBS elicits no relevant results. Nor has Fox News addressed the bombings, although it did find time (8/18/20) to cover the archaeological discovery of an old soap factory in Israel’s Negev Desert.

Other major news networks were not much better. In a wide ranging interview with Trump advisor Jared Kushner, CBS’s Face the Nation host Margaret Brennan (8/16/20) did mention that “there were hostilities overnight in Gaza. There were Israeli airstrikes. Palestinian militants fired off rockets,” in a question about the US’s role in the Middle East, but did not return to it. 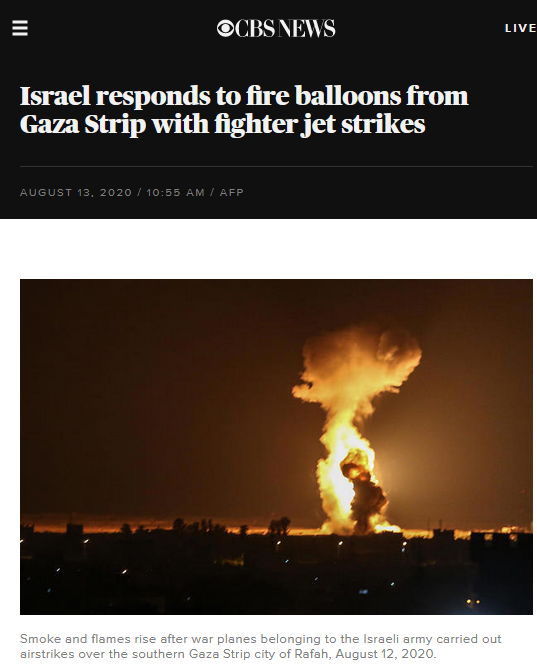 AFP (CBS, 8/13/20) describes attacks on Gaza as “the latest retaliation against fire bombs suspended from balloons that have been released from the Palestinian territory.”

Israel attacked targets of Islamist group Hamas in Gaza and halted fuel supplies to the enclave Thursday in the latest retaliation against fire bombs suspended from balloons that have been released from the Palestinian territory.

The story clearly presents the bombing as a reactive Israeli counter-effort—not an attack on Palestine, but a response against Hamas, which it describes not as a political party but as an “Islamist group.” Hamas, it insists, was the target, despite later noting that a UN-run school was also hit. AFP did not comment on the lack of symmetry between homemade explosives tied to balloons and F-35 jets.

ABC News, meanwhile, relied on another news agency for all of its (limited) coverage (two pieces), reprinting (8/16/20) an Associated Press article that similarly presented the cutting off of Gaza’s electricity supply as a “response” to aggression from the “Palestinian militants” of Hamas. 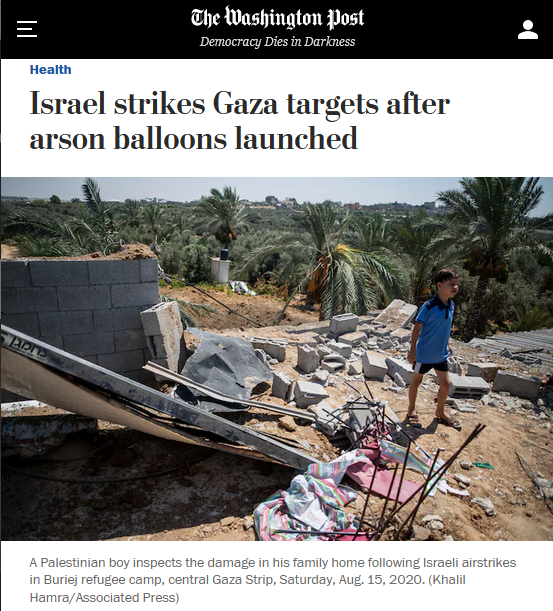 AP (Washington Post, 8/16/20) reported that “Israeli aircraft bombed several sites belonging to the militant Hamas group in the Gaza Strip”—though in the Post the article was accompanied by a photo of a boy with his destroyed home.

A second AP story, headlined “Israel Strikes Gaza Targets After Arson Balloons Launched,” was picked up not just by ABC (8/16/20) but by influential outlets like the New York Times (8/15/20), Washington Post (8/16/20) and Guardian (8/16/20). The piece is at pains to present Israeli actions as directed purely against Hamas, and as a response, not an aggressive action, allowing Israeli military spokespersons to drive the narrative. Indeed, much of the report reads like an IDF press release.

A leaked 2009 publication from the Israel Project, an Israeli/American group that advises Israel advocates on what language to use when discussing the Palestine conflict, stresses that they should “clearly differentiate between the Palestinian people and Hamas.” “If it sounds like you are attacking the Palestinian people (even though they elected Hamas) rather than their leadership, you will lose public support,” they counsel. Media, it seems, are doing their job for them, in much the same way they reflexively present US actions against Iran as a “response” or a “counter” to the threat from Tehran (FAIR.org, 6/6/19).

In their seminal books on media coverage of the conflict, Bad News From Israel and More Bad News From Israel, Greg Philo and Mike Berry wrote that TV news followed a “consistent pattern,” which misleadingly presented the events as “Palestinian action and Israeli response and retaliation,” their focus group sessions showing that the presentation had a “significant effect” on how the public remembered events and apportioned blame, effectively legitimizing Israeli actions. Sixteen years after their first study was published, corporate media appear to be following exactly the same playbook.

The US press sampled here have produced barely any original coverage of the 11-day (and counting) bombing campaign of the area commonly described as the world’s largest open-air prison. This is in contrast to foreign channels such as Al-Jazeera and RT, or alternative media like Democracy Now!, all of whom have followed the events in more depth, and often with fewer resources. When corporate media have covered it, they have followed tried and tested conventions that reproduce an Israeli-friendly narrative.

Media coverage of Israel/Palestine is a topic FAIR has criticized for decades (e.g., Extra!, 1/91; Extra! Update, 2/05; FAIR.org, 8/6/14, 3/29/19). The reporting on the latest round of attacks on Gaza follows the patterns we have often remarked on: downplaying Palestinian suffering and viewing the conflict from an Israeli state perspective.