The Commodification of Black Death

As corporations and large universities attempt to profit off of the movement against racial violence, it’s apparent that racism and capitalism are as intertwined as ever. 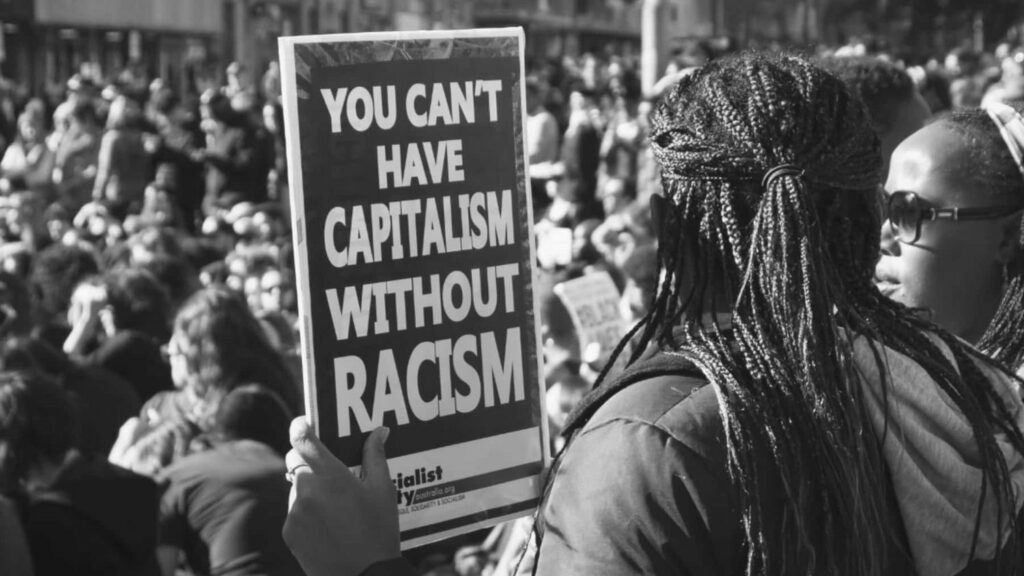 27 Jul 2020 – The corporate response to the national and worldwide expressions of outrage over the murders of Breonna Taylor, Ahmaud Arbery, and George Floyd is telling. But of what?

Certainly, racism did not suddenly become more egregious, overt, or immoral with the most recent murders by white police officers and civilians. Neither did it suddenly become clear—to Black people, at least—how little our humanity is valued in America.  Rather, the sustained swell of public indignation—sparked and fueled by the intense expressions of hurt and anger in the Black community—has made it impossible for even multibillion-dollar corporations to ignore these recent manifestations of racism.

When one examines the actual relationship of these companies to their employees and customers, many of whom are Black, it isn’t difficult to see from their practices that they have never truly had the welfare of the Black community at heart.

Aroused by the surge of mass protests beginning in late May and early June, dozens of major U.S. companies were struck with sudden epiphanies about the reality of being Black in America. Soon, many were ordering their PR departments to publicly demonstrate their allyship with the Black community. These same organizations, while paying lip service to their intolerance for racism, have abysmal records of supporting Black people in practice.

Like Amazon, which in June proudly stated on its homepage that it “stands in solidarity with the Black community” and boasts on its blog about donating $10 million to “organizations supporting justice and equity.”  The company also advertises having “raised the Pan-African flag on Amazon’s Seattle campus earlier this year…to honor Black history and celebrate the meaning of the flag.” What meaning, exactly, does Amazon impart to the red, black, and green banner?  Adopted by Black people around the world as a symbol of their love for their individual and collective identities, the flag of Black liberation was created by Marcus Garvey, a Pan-Africanist who advocated for the economic independence of African-Americans and Black people worldwide.

Amazon, meanwhile, has aggressively opposed the efforts of some of its employees, 26.5 percent of whom are Black, to organize for better pay and safe working conditions.

Other multinational, multibillion-dollar corporations that have capitalized on this moment to declare their heartfelt solidarity with the Black community include McDonald’s (“We stand for…victims of systemic oppression and violence”);  Coca-Cola (“We have donated to 100 Black Men of America Inc. and the National CARES Mentoring Movement as a part of the effort to end systemic racism and bring true equality to all”); Adidas (“The success of Adidas would be nothing without Black athletes, Black artists, Black employees, and Black consumers”); and Target (“We are committing $10 million and ongoing resources for rebuilding efforts and advancing social justice”).

These companies understand well who their consumers are. They understand the buying power of the Black community, as well as the reality that perception, in the eyes of all their customers, is everything. The inherent hypocrisy of these media offensives would be insulting, if the shameless opportunism underlying them weren’t so blatant. When one examines the actual relationship of these companies to their employees and customers, many of whom are Black, it isn’t difficult to see from their practices that they have never truly had the welfare of the Black community at heart.

Walmart, for instance, is not only notorious for exploiting its low-wage employees, but has also made use of prison labor to increase its profits.

In this context, the words of Walmart CEO Doug McMillon, spoken in June, about the “deep-seated issues related to injustice, inequality and fairness” in the U.S. are, at best, hollow: “Let me say clearly to our Black and African American associates and communities: We hear you. We see you. I want you to know you are valued. You are loved members of our family.”

A much better use of Walmart’s $100 million would be to increase wages and improve health care for its 340,000 Black workers in the U.S. Or, rather than using “philanthropy” as a convenient cover for tax write offs, Walmart might set an example for its competitor, Amazon, by allowing for the unionization of its workers.

For-profit corporations are not the only organizations riding the bandwagon. Like many universities across the country, the institution where I’ve spent the last several years, Harvard University, also released a rash of maudlin pronouncements against racism.

Once things settle down, I wonder how many of my colleagues will be able to look back at this time—not only as one of epiphanies and guilt—but as the moment that precipitated within themselves the burgeoning forth of a new commitment to racial justice.

On May 30, Harvard President Larry Bacow issued a letter to the Harvard community simultaneously decrying the “senseless killing” of George Floyd at “the hands of those charged to protect us” and testifying to his belief in the American Dream. To Black folks who, like Malcolm X, can say, “I don’t see any American dream—I see an American nightmare,” the contradictions in Bacow’s sentimental credo are glaring.

During the first weeks of protests, representatives of Harvard’s various departments, divisions, and campus organizations flooded our inboxes with their own statements. As a Black woman who has intimate experience with (predominantly white) academia’s shallow commitment to increasing the numbers of Black students and faculty, I felt like a spectator at some absurd masquerade. The gatekeeper’s censure of his own fence—while he continues to grip the keys firmly in hand—reaches the ears of those standing outside it with no small grain of salt.

As a Black person in STEM, a field that has traditionally been very exclusionary of Black and other people of color, it has been a somewhat surreal experience to see the explosion of white scientists suddenly rallying around the cause for Black lives. Once things settle down, when all the reading lists have been distributed and the petitions signed, I wonder how many of my colleagues will be able to look back at this time—not only as one of epiphanies and guilt—but as the moment that precipitated within themselves the burgeoning forth of a new commitment to racial justice.

As the I, Too, Am Harvard campaign of 2014 brought to national attention, the experience of many Black Harvard students is one of being alienated and devalued by their peers and professors. Student activists at other predominantly white institutions across the country—including Yale, the University of Michigan, and Georgetown—have also protested to make their collective grievances known and to advocate for the hiring of more Black faculty.

But Black students are not the only people of color who have suffered due to the actions or inactions of these universities, which regularly profit from the suffering of Black, poor, and disenfranchised people.  In April 2019, students belonging to more than a dozen universities nationwide organized to demand that their institutions divest from the prison-industrial complex, which ensnares exceedingly high numbers of Black men, women, and children. Harvard, the wealthiest university in the world, receives a portion of its $40.9 billion endowment from its holdings in companies that profit from the prison-industrial complex.

If Harvard were to divest its holdings and reinvest in communities most deeply impacted by mass incarceration, as the Harvard Prison Divestment Campaign demands, this would be a much more genuine show of solidarity with the Black community than the dissemination of letters and endless webinar panels on racial equity.

Sentimentality notwithstanding, the corporate response to racism in recent weeks smells more of economic opportunism than ingenuous condemnation against the crimes—historical and recent—committed against Black America.  It is beside the point that individuals within these organizations may have genuine, well-intentioned motivations. Their maneuvering in this moment is tantamount to a cooptation of Black struggle and the commodification of Black death. This is nothing new in America.

Yet as long as the masses of ordinary American citizens continue to mobilize and organize against police killings, the horrors of the prison-industrial complex, and the various racist institutions which continue to harm Black people, there is hope for real transformation.

Ultimately, however, racism can never be eradicated as long as the fundamental structures of capitalism—which depend on racism for survival—remain intact. History is rich with Black intellectuals who have brilliantly expounded on this point, from W.E.B. Du Bois, to Fannie Lou Hamer, to Malcolm X, to Angela Davis.

Nia Imara is an astrophysicist, writer, and artist.