The World Cannot Forget the Rohingya 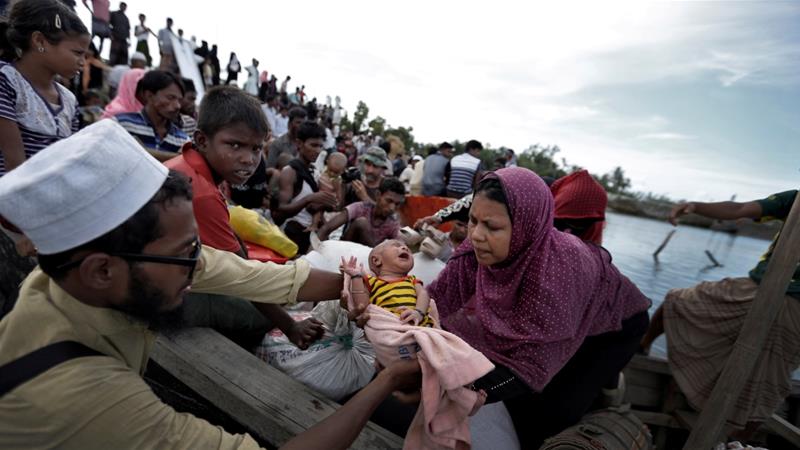 Newly arrived Rohingya refugees board a boat as they transfer to a camp in Cox’s Bazar, Bangladesh. [File: Reuters/Cathal McNaughton]

25 Aug 2020 – This week marks exactly three years since the Myanmar military poured into Rakhine State and launched a vicious operation against the Rohingya people. Over the course of a few weeks, thousands of women, men and children were killed, mutilated and raped, whole villages were burned to the ground, and hundreds of thousands fled into neighbouring Bangladesh.

Even for us Rohingya, who have been oppressed and rendered stateless in our home country for decades, the savagery of the violence in 2017 was unprecedented. Today, our plight has mostly disappeared from the headlines in international media, but our people are still suffering. We need the world’s help more than ever to end the genocide against us in Myanmar.

Close to a million Rohingya continue to live as refugees in Bangladesh, mainly in the southeastern district of Cox’s Bazar. Bangladesh has generously welcomed and hosted people who fled for their lives, but an overcrowded refugee camp is no place for a life of dignity. A whole generation of Rohingya children is growing up in deplorable conditions, with little access to education, or hope for the future.

What the refugees want the most is to return home to Myanmar, but that is simply not possible today. The 600,000 Rohingya who remain in Rakhine State live in an open-air prison. Every aspect of their lives is controlled by the state: To leave one’s village to attend school, to make a living or to go to a hospital usually requires special permission or a well-placed bribe.

At the moment, Myanmar is gearing up to hold a general election on November 8. It is the first vote since the historic election in 2015, when Aung San Suu Kyi’s National League for Democracy (NLD) won in a landslide, ending decades of direct military rule. Many Rohingya supported the NLD at that time, but have since grown bitterly disillusioned with the party’s policies. Aung San Suu Kyi and her civilian government have proven complicit in the genocide against us by continuing to support the army’s actions and denying on international platforms what is happening on the ground.

Although in the past, many Rohingya in Myanmar were able to vote and run in elections, today they are being barred from both. In 2015, Myanmar abruptly withdrew temporary citizenship cards from ethnic Rohingya, which had given them the right to vote. This year, the authorities have also rejected members of the Rohingya community who have tried to register to run in the elections, claiming their parents were not citizens and that they, therefore, did not meet the criteria. This is despite the fact that some of these candidates have been allowed to run in previous elections.

There still is a glimmer of hope for the Rohingya, however: the momentum behind the international justice process. Last November, the Gambia filed a case against Myanmar in the International Court of Justice (ICJ), accusing it of committing genocide against the Rohingya. A few days later, the International Criminal Court announced that it was launching an investigation into the Myanmar military for crimes against humanity.

In January this year, the ICJ ordered Myanmar to end genocidal practices against the Rohingya, and to report regularly on how it complies with these orders. But even though the government has claimed it was improving conditions in Rakhine State since, in reality, almost nothing has changed. If anything, conditions have become even worse this year for the Rohingya, as fighting between the military and armed groups has intensified while the pandemic has swept through the region.

My own organisation, the Burmese Rohingya Organisation UK, has also brought a case against Aung San Suu Kyi, her government and the military before the Argentinian judiciary. It relies on the principle of universal jurisdiction – the notion that some heinous crimes can be tried anywhere, regardless of where they took place.

But for these efforts to be effective, we need the international community’s support. We have spent the past three years telling the world about our plight and telling the same stories over and over again. In return, we have received little more than sympathy and empty promises.

The world has failed to take concrete action to help the Rohingya. Despite the overwhelming evidence against Myanmar of their crimes, our reality is the same – Rohingya are suffering, whether in villages in Rakhine State or in refugee camps in Bangladesh.

The UN Security Council has remained paralysed for three years, failing to condemn Myanmar. The US and the EU have imposed individual sanctions on members of the security forces, but they do not go far enough in pressuring the military leadership. They have also refused to use the term “genocide”, in part because that would bring with it some legal obligations to act.

Rohingya are only asking for an opportunity to live a life of dignity in our own country. The oppression that has rendered us stateless and prisoners in our own homes must end immediately. Those responsible for the violence against us must be held to account to prevent it from ever happening again.

These are big but far from impossible tasks – history shows that genocidal regimes do not last long. One year from now, on the next anniversary, I hope we will have gotten closer to making this a reality.