Does the public care about the 40 remaining inmates with no obvious end to their imprisonment? 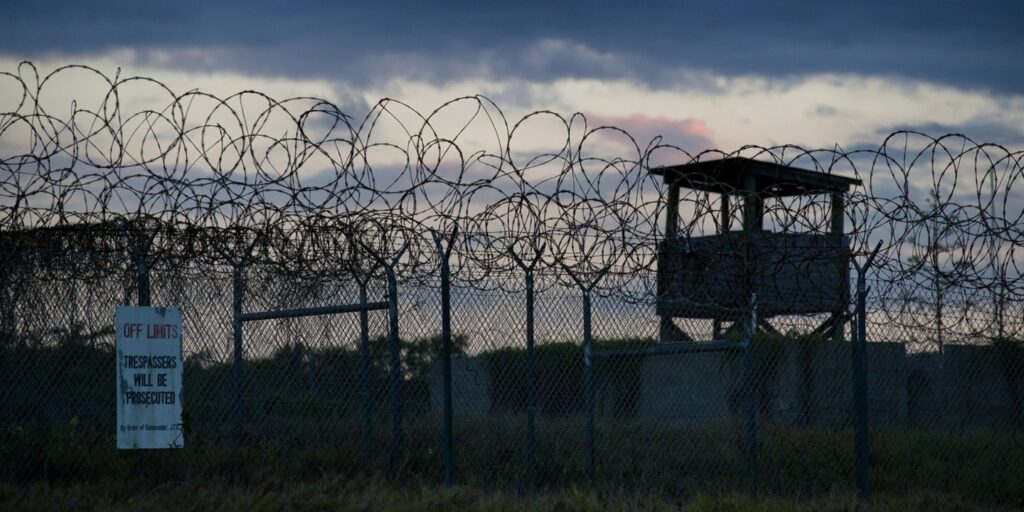 In this photo reviewed by U.S. military officials, the sun sets behind the closed Camp X-Ray detention facility on April 17, 2019, at the Guantanamo Bay Naval Base in Cuba. Photo: Alex Brandon/AP

10 Sep 2020 – It’s more than 12 years since the Supreme Court cracked open the prison gates at Guantánamo Bay, ruling that the prisoners held there, the living embodiments of the post-9/11 war on terror, had the constitutional right to petition the federal courts for release.

The decision, Boumediene v. Bush, was an unexpected affirmation that the rule of law had survived the shock of Sept. 11, 2001, against all odds and despite the effort by the administration of President George W. Bush to treat the U.S. naval base in southeastern Cuba as a black hole where law couldn’t enter and the “worst of the worst” could never leave.

Now another 9/11 anniversary is upon us, always an occasion to contemplate that day and where it has brought the country. But even so, why write about Guantánamo now, in the midst of a presidential campaign during which the island prison is never mentioned, with a new term about to begin at the Supreme Court, which has turned down every Guantánamo case for the past decade?

Has anyone noticed? Guantánamo once stirred public passions. Now that the inmate population is down to 40, from the nearly 800 who passed through the prison in its 18-year existence so far, do people still care?

The decision, Al Hela v. Trump, issued late last month by a three-judge panel of the United States Court of Appeals for the District of Columbia Circuit, did not go completely unnoticed; the indispensable Carol Rosenberg, who has covered Guantánamo longer and better than any journalist alive, reported on it for The Times. But in the public policy space it has been met with silence.

It’s my simple premise in this column that people should notice and should care, one reason being that the decision represents the culmination of judicial politics as raw as any I’ve ever observed. Conservative judges have hated the Boumediene decision from the moment in June 2008 when Justice Anthony Kennedy announced his opinion for a 5-to-4 majority, over a dissenting prediction by Justice Antonin Scalia that the decision “will almost certainly cause Americans to die.”

Justice Kennedy has retired and Justice Scalia has died, but Judge A. Raymond Randolph is still on the D.C. Circuit, where he has served since 1990. Early in the Guantánamo saga, he wrote three majority opinions for the appeals court denying the detainees access to federal court. The Supreme Court overturned all three. The third was the case that became Boumediene, and since that day, Judge Randolph has written or joined a remarkable series of opinions that have sapped the Supreme Court decision of much of its meaning.

Last month’s Al Hela decision, which he joined (the newest member of the panel, Judge Neomi Rao, appointed last year by President Trump, wrote the majority opinion), was the final blow. One might even call it a triumph for a judge who in a 2010 speech to the Heritage Foundation shockingly compared the five justices in the Boumediene majority to F. Scott Fitzgerald’s characters in “The Great Gatsby,” Tom and Daisy Buchanan, “careless people who smashed things up” and who “let other people clean up the mess they made.” (And I’ll note that Attorney General William Barr is fully on board in the war against Boumediene, referring to it in a speech to the Federalist Society last year as “the most blatant and consequential usurpation of executive power in our history.”)

How can a lower court render a Supreme Court decision a nullity? We saw a recent example in the bold refusal of the United States Court of Appeals for the Fifth Circuit to apply to an anti-abortion law in Louisiana despite a 2016 Supreme Court decision that struck down an identical law in Texas. The Supreme Court made properly short work of that defiance in its decision this summer in June Medical Services v. Russo.

The Guantánamo situation is more subtle and for that reason more interesting. In one of its first Guantánamo decisions, Rasul v. Bush in 2004, the Supreme Court overturned a decision by Judge Randolph and held that the naval base, although obviously located in a foreign country, was functionally part of the United States and for that reason was subject to the jurisdiction of the federal courts. The justices in that decision rejected the applicability of a post-World War II decision, Johnson v. Eisentrager, which held that federal courts lacked jurisdiction over cases brought by German prisoners of war being held overseas by the United States.

The Rasul decision was based on the court’s interpretation of a jurisdictional statute. The Boumediene ruling went deeper, holding that the prisoners’ access to federal court was not simply a statutory right but was grounded in the Constitution’s protection of the “privilege of the writ of habeas corpus.” Justice Kennedy’s opinion left a major question unanswered, however: Now that the Guantánamo prisoners could petition for habeas corpus, what rights could they actually assert in their challenges to their continued detention? What substantive rights did they possess?

In the immediate aftermath of Boumediene, dozens of prisoners filed habeas petitions, and federal district judges in Washington granted 38 of them, an impressive number given that the number had been zero not long before. The Obama administration, in office by then, released about half of the successful petitioners without a fight. But it successfully appealed other cases. The D.C. Circuit in fact has never affirmed a grant of habeas that the government contested. Case by case, in many with opinions by Judge Randolph, the appeals court wove around the prison camp a tight web of rules favoring the government; for example, accepting gossamer chains of circumstantial evidence as sufficient proof that an inmate’s designation as an enemy combatant was correct.

Decisions of that kind, based on factual evaluations of the prisoners’ claims, made it unnecessary for the appeals court to decide the open question about how the Constitution itself might apply. The question lingered in the background of many of the cases. Last year, in Qassim v. Trump, a three-judge D.C. Circuit panel strongly suggested that a claim under the Constitution’s due process guarantee would be upheld in the right case; the panel vacated and sent back the District Court’s decision holding that a due process argument was categorically unavailable to a noncitizen held outside the country.

Judge Randolph was not on the panel in the Qassim case. But in May of this year, he was on the panel in another case, Ali v. Trump, in which the same judge who wrote the opinion in Qassim, Patricia Millett, again wrote for the majority. As in the Qassim case, her opinion held that the district court had been right to reject the inmate’s habeas petition, but wrong to do so categorically. Judge Millett noted that while “circuit precedent has not yet comprehensively resolved” the question, “the district court’s decision that the Due Process Clause is categorically inapplicable to detainees at Guantánamo Bay was misplaced.”

This modest opinion, reserving the hard question for another day, was nonetheless enough to set Judge Randolph off. Concurring only in the judgment, he refused to sign Judge Millett’s opinion, accusing her of ignoring what he insisted was clear Supreme Court precedent that made the due process guarantee unavailable to “a nonresident alien enemy detained by the United States outside of our sovereign territory.”

The precedent Judge Randolph cited for this sweeping proposition was the old post-World War II Eisentrager case, the very case that the Supreme Court had rejected in 2004 when it treated Guantánamo as a functional part of the United States that came within the jurisdiction of the federal courts. I’ll be polite: to accept Judge Randolph’s opinion as an accurate account of the state of the law is to ignore the entire trajectory of the Supreme Court’s Guantánamo cases.

That brings me to the most recent case, Al Hela. Judge Randolph got lucky when the panel was designated. Instead of serving with two of the appeals court’s more liberal members, Judge Millett and Judge Judith Rogers, as in the Ali case, he was joined by two conservative colleagues, Judge Rao and Judge Thomas Griffith. All three agreed that the habeas petition filed by Abdulsalam Al Hela, a Yemeni tribal sheikh held at Guantánamo since 2004, was deficient for a variety of standard reasons.

Judge Griffith, who retired from the appeals court last week, argued in a separate opinion that there was no need to venture further into constitutional territory. But in her controlling opinion, Judge Rao said it was time to decide the due process issue because Mr. Al Hela claimed in his habeas petition that the government’s reliance on anonymous hearsay in the intelligence reports it used to justify his continued detention violated his right to due process.

But no such right applied to him, Judge Rao wrote, concluding that “we reject Al Hela’s due process claims on the threshold determination that, as an alien detained outside the sovereign territory of the United States, he may not invoke the protection of the Due Process Clause.” A footnote to her opinion contained the astounding assertion that “our court has adhered to Eisentrager’s holding that the Fifth Amendment’s Due Process Clause does not apply outside the territorial United States and therefore cannot be invoked by detainees at Guantánamo Bay.”

Judge Griffith, in his separate opinion, properly objected: “But we have never made such a far-reaching statement about the Clause’s extraterritorial application.” The objection was fruitless. Judge Randolph had done his work and had the last word, at once cryptic and completely clear in a concurring opinion consisting of a single sentence: “I agree with the court’s decision not only for the reasons expressed in its opinion, but also for the additional reasons stated in my opinion concurring in the judgment in Ali v. Trump.”

What might happen next is anyone’s guess. It’s not out of the question for the full D.C. Circuit to reconsider the panel decision, as it did last week when it overturned a panel opinion in the Michael Flynn case, restoring the district judge’s discretion to decide whether to yield to the Trump administration’s demand to dismiss the prosecution of the president’s former national security adviser. It’s conceivable the Al Hela case could end up at the Supreme Court. I have trouble conjuring five votes there even to sustain the Boumediene precedent, let alone to carry it into due process territory.

While I’ve never been to Guantánamo, I have revisited it regularly during my years writing this column. Why care about Guantánamo at this late date? As the 9/11 anniversaries have accumulated and the shock of that day has been absorbed into our national narrative, I’ve come to think of Guantánamo, born in fear and sustained through political cynicism and public indifference, as a mirror of ourselves during these opening decades of the current century, trapped no less than our 40 remaining “forever” prisoners with no obvious end to their imprisonment. There have been a few redemptive moments in this story, and the Boumediene decision was one of them. If it’s now to be buried without even a decent funeral, we should at least take note.

Linda Greenhouse, the winner of the 1998 Pulitzer Prize, writes on alternate Thursdays about the Supreme Court and the law. She reported on the Supreme Court for The Times from 1978 to 2008, and is the author of several books.