“Behind the short-sighted governments that divide and mismanage human affairs, a real force for world unity and order exists and grows.”
— H. G. Wells in, A Short History of the World, 1943 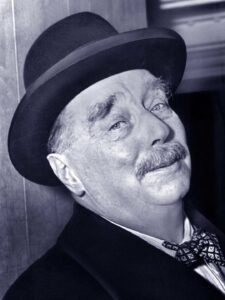 Herbert George Wells, an active world citizen, is usually known as just H.G. Wells. (1) From the publication of The Time Machine in 1895 to his death in 1946, Wells ‘bestrode his world like a colossus’.  He was a creator of modern science fiction, a pioneer of women’s rights (though he treated some badly in his many love affairs), a journalist, historian and novelist.  Above all he was a social thinker devoted to peace and a stable world order. (2)

Wells first studied biology under Thomas H. Huxley, the leading Darwinian of Victorian times, and came to see the ethical principles underlying humanity’s social systems as being rooted in the evolutionary process and therefore having the potential for onward development. Just as there was one major factor in biological progress − natural selection − so in social progress, there was one major factor − the quality of enlightened thought. As he wrote,

“However urgent things may seem, a great mental renascence must precede any effectual reorganization of the world.  A systematic development and a systematic application of the sciences of human relationship, of personal and group psychology, of financial and economic sciences, and of education − sciences still in their infancy − is required.  Narrow and obsolete, dead and dying moral and political ideas have to be replaced by a clearer and simpler conception of the common origins and destinies of our kind.”

Wells was critical of democracy as being too slow and always tending toward the middle of the road on important issues.  In 1928, he tried to alert to new dangers and possibilities by proposing an “open conspiracy” − an elite group of pioneer world citizens who would organize to move humanity forward. (3). The Open Conspiracy was his organizing manual for the diverse constituencies of globally-minded citizens to bring sanity to the organizing of human affairs.

Wells clearly foresaw the need for a re-organization of the economic affairs of humanity.  As he wrote,

“A federation of all humanity together with a sufficient measure of social justice to ensure health, education, and a rough equality of opportunity to most of the children born into the world, would mean such a release and increase of human energy as to open a new phase in human history.”

Some progress has been made in the identification of endangered species, and a variety of international conventions have at least slowed the despoliation of an amount of our natural heritage.  Yet the ongoing destruction of forests, over-exploitation of the oceans as well as other signs of the environmental crisis are constant reminders of how much distance is left to travel.

Wells was harshly critical of Marxist theory and of the Communist rule of Stalin in the USSR.  Thus he contrasts his “open conspiracy” with the closed conspiracies and vanguard approach of Lenin whom he had met in 1920. He was also highly opposed to Fascism and its closed conspiracies.  The “open conspiracy” is a project for every manner of person once an individual has developed a ‘world consciousness’, though Wells was himself very Eurocentric in his world outlook.

He summed up his views as a race between education for world citizenship and catastrophe − a task or bold and creative minds.

Anticopyright: Editorials and articles originated on TMS may be freely reprinted, disseminated, translated and used as background material, provided an acknowledgement and link to the source, TMS: H.G. Wells (21 Sep 1866 – 13 Aug 1946): The Open Conspiracy for Peace, is included. Thank you.