Men held at The Hague appeared on Bangladesh border in mid-August, sources say. 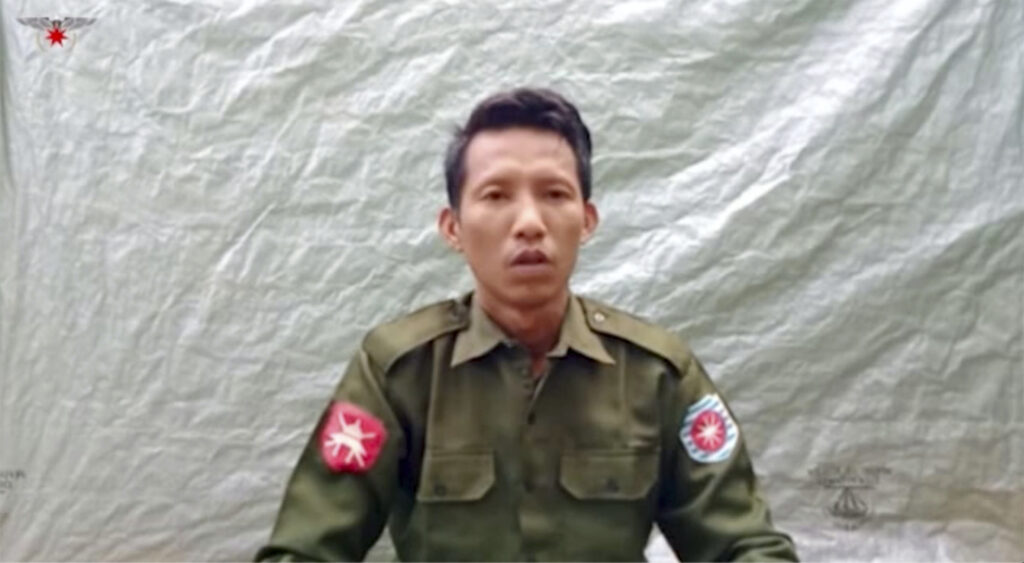 In this image taken from video provided by the Arakan Army, Private Myo Win Tun provides a video testimony from an undisclosed location somewhere in Myanmar on July 23, 2020. Two soldiers who deserted from Myanmar’s army have testified on video that they were instructed by commanding officers to “shoot all that you see and that you hear” in villages where minority Rohingya Muslims lived, a human rights group said Tuesday, Sept. 8, 2020. (Arakan Army via AP) 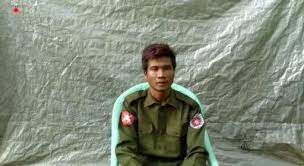 Myanmar army deserter Zaw Naing Tun, 30, confirms participation, under military orders, in the 2017 campaign of killing and rape of Rohingya Muslim civilians. He is in the custody of the International Criminal Court in the Netherlands.
(Submitted by name withheld) The Pueblo Chieftain

9 Sep 2020 – Two men believed to be deserters from Myanmar’s army are in the custody of the International Criminal Court at The Hague after reporting their participation, under military orders, in the 2017 campaign of killing and rape of countless Rohingya Muslim civilians.

Their recent arrival at The Hague in the Netherlands, confirmed by sources to CBC News, is a turning point in the effort to seek justice for Myanmar’s Rohingya Muslims.

The information they bring will also “significantly advance” the court’s investigation, one source told CBC.

In statements initially made on videos filmed inside Myanmar this summer, the two former privates, 33 and 30 years old, provide often disturbing particulars to previously documented reports — including names of battalions involved in the campaign, the villages they destroyed, as well as the locations of mass graves they say they helped dig and fill with bodies of people they killed.

It is the first time Myanmar military members serving at the time have provided a detailed insider’s view of the violence, one that closely mirrors the version of events repeatedly told by victims.

Several countries, including Canada, have since labelled it all as genocide, while a UN fact-finding mission found enough evidence to call for the prosecution of at least six senior military officials to “determine their liability for genocide.”

The two much lower-ranking men now at The Hague described very similar orders from different superiors to kill or shoot “all” Rohingya they encountered, and that women, children and elderly people were among their victims. It is the kind of information likely to bolster the case, made by several investigators and human rights advocates, that the violence was co-ordinated and ordered from above.

According to sources familiar with the sequence of events who requested anonymity because of the sensitivity of the case, the men later appeared together on the Bangladesh border in mid-August, retelling their stories, and requesting protection. It is not clear how they came to be at the porous border.

With their transfer to ICC custody, the once-foot soldiers in Myanmar’s army are now potential witnesses to alleged genocide.

ICC spokesperson Fadi El Abdallah, however, denied the reports saying the men are “not in ICC custody.”

The 2017 episode of violence against Rohingya erupted when a militant group, the Arakan Rohingya Salvation Army (ARSA), attacked several outposts, killing 12 security personnel on Aug. 25 of that year.

The Myanmar military, or the Tatmadaw, says that what followed were “clearance operations” to flush out militants, and that if atrocities were committed, they were isolated incidents.

Sources confirm the two men now at The Hague initially appeared on separate but similar videos, seemingly implicating themselves and at least 17 others by name in the brutal 2017 campaign.

The two videos, apparently made by the Arakan Army, an insurgent group fighting the Tatmadaw, are subtitled in English and branded with the group’s logo.

The status of the individuals in the video — whether or not they were captives of Arakan Army — is unclear. CBC News could not independently verify the authenticity of the videos or the circumstances under which they were filmed.

However, Fortify Rights, a Thailand-based organization that investigates human rights violations and has long documented many violations in Myanmar, translated and analysed the videos when they came to its attention.

Chief executive Matthew Smith said “we have reason to believe” the men in the video are the same men now held at The Hague.

CBC in Myanmar – ‘No genocide happened here’: 1 year after Rohingya exodus, only handful have returned

“When we take a closer look at what we had documented and what the soldiers [in the video] are sharing about what took place there, it’s a match,” he said in an interview.

For example, one of the speakers mentions Kyet Yoe Pyin, a village where he said he provided sentry duty while his superiors committed sexual assault.

Smith said Fortify Rights had gathered extensive testimony from victims from Kyet Yoe Pyin documenting the razing of parts of the village, and widespread “particularly brutal” sexual assault at the same time the man said his battalion was there.

The location of one of the mass graves mentioned in one of the videos is also consistent with a location known to have been the site of well-documented massacres, said Smith.

Testimony could be ‘significant’

Smith said the speakers name six light infantry battalions previously documented as being operational in the area at the time. In total, the men are purporting to have been involved in the killing for up to 180 people. One of the men admits to one sexual assault.

The soldiers’ description of early morning raids and the involvement of police forces are all consistent with what victims reported.

Smith said there seemed to be no evidence the speakers were making their statements under duress.

“If indeed these are the two men in The Hague, the testimony that they’re providing is significant,” said Smith, adding it would be “monumental” for Rohingya people.

If so, he said, the ICC should “swiftly prosecute” them and then use them as witnesses for a larger trial, possibly of more senior figures.

The ICC route was initially blocked because Myanmar is not a signatory to the statute that created it. But last year, the ICC ruled it did have jurisdiction because the violence led to the crime of deportation of Rohingya into Bangladesh—which is a member of the ICC.

Though the ICC typically only prosecutes the most senior commanders, the two men now in custody could well become defendants as well as witnesses, depending on the outcome of the investigation.

CBC News could not immediately reach Myanmar officials for comment.

No longer in Bangladesh

Payam Akhavan, international legal counsel for Bangladesh, said that two Myanmar nationals did appear last month at the border seeking protection from the Bangladesh government, but “I am not at liberty to divulge either their identity or where they have been taken.”

He said that they provided credible information about participating in the 2017 violence “under direct orders from their military commanders.”

As a result, “consistent with its obligations under the ICC statute, Bangladesh informed the [ICC] prosecutor’s office in The Hague,” says Akhavan. The men, he added, were “no longer in Bangladesh.”

Akhavan, however, could not confirm whether they were the same individuals who appeared on video.

“There are numerous such individuals who have participated in mass atrocities,” he said.

If their stories are proven to be true in an investigation, he said the men’s information could confirm that “these crimes were not by any means random or isolated, the misdeeds of a few bad soldiers, but that they were executed pursuant to orders from the highest levels of the military chain of command.”

It would also give survivors some hope, he said, of seeing some measure of justice.

“Impunity is not an option. We must do what we can despite constraints. Some justice is better than no justice at all.”

A previous version of this story incorrectly stated that the two video statements were made by ARSA. In fact, they were made by the Arakan Army. Sep 08, 2020

Nahlah Ayed is the host of the nightly CBC Radio program Ideas. A veteran of foreign reportage, she’s spent nearly a decade covering major world events from London, and another decade covering upheaval across the Middle East. Ayed was previously a parliamentary reporter for The Canadian Press.

One Response to “Once Foot Soldiers in Myanmar’s Army, Now Potential Witnesses to Mass Atrocities”