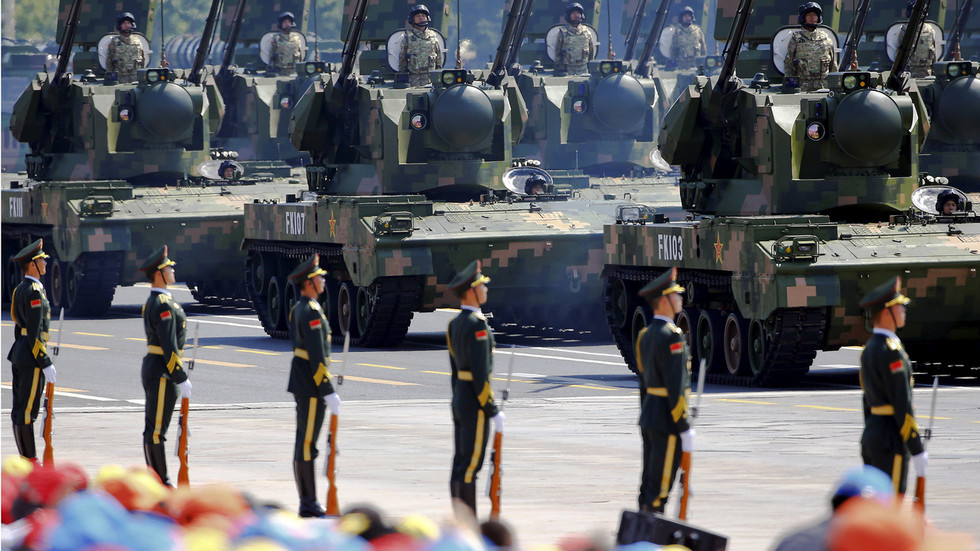 2 Sep 2020 – A report from the US Department of Defense paints China as a rising military power capable of challenging America for global superiority. The reality is that the report is a product of Washington’s nervous psychological state.

The US Department of Defense has released a sobering assessment of Chinese military capability which throws into question the viability of any ‘Pacific pivot’ as the US undergoes its own military restructuring, designed in part to meet the challenges posed by a Beijing increasingly comfortable with its expanded role in global affairs.

The 173-page report, titled ‘Military and Security Developments Involving the People’s Republic of China’, attaches relevance to nearly every aspect of the country’s military expansion, from nuclear weapons to naval ships, and couches them exclusively as examples of a projection of military that might be designed to challenge the US as a leader on the global stage.

Missing from this assessment is any reflection on the role played by the US in triggering this Chinese military buildup. For example, there is no mention of the cause and effect relationship between America’s abandonment of the Intermediate Nuclear Forces (INF) treaty, or its insistence on trilateral negotiations involving China when it comes to the extension of the bilateral US-Russian New START treaty, and China’s decision to modernize and expand its own arsenal of nuclear weapons (from 200 to 400, inclusive of strategic and intermediate weapons – a paltry sum when compared to the 1,550 strategic nuclear weapons the US maintains).

Likewise, at a time when China is aggressively pursuing its disputed territorial claims in the South China Sea, the decisions by the US to project its own naval power in response, in the form of aircraft carrier battlegroups, could logically explain China’s expansion of its own naval capabilities.

This does not mean that China is not a rising global force possessing international interests deemed vital to its own national security, which it requires the projection of its military power to secure.

It has also been engaged in a massive expansion of its global economic reach, known as the Belt and Road Initiative. Since its unveiling in 2013, this has morphed into two separate but complementary programs: the land-based Silk Road Economic Belt, comprising six ‘development corridors’, and the ‘21st Century Maritime Silk Road’, which links China with South Asia, Africa, the Middle East and Europe.

While the initiative is exclusively economic, the new reality created by China’s expansive global economic presence has prompted China to establish military bases in Africa and elsewhere, designed to secure the vital lines of communication necessary for the success and survival of the plan.

For 75 years, the United States has pursued policies linked to a post-World War Two “rules-based order” promoting a framework of liberal political and economic rules sustained by a network of international organizations and regulations, all tied to the notion of unchallenged US leadership. This “rules-based order” has underpinned US relations with Europe, through the trans-Atlantic partnership embodied by NATO, and in the Pacific, in terms of the post-war relationships the US maintains with Japan, South Korea and Australia.

Also: The US-China game of chicken in the South China Sea does nothing to solve the dispute – it’s a mindless and dangerous escalation

The idea of a liberal “rules-based order” could be defended during the period of the Cold War, where the US and its allies faced off against the Soviet Union and Communist China in a bi-polar ideological battle for global influence. This model, though, built as it was on the principle of American exceptionalism, has proven more difficult to justify and sustain in the years following the collapse of the Soviet Union.

The notion of all-powerful American unilateralism floundered in the face of a multi-polar global reality and the disastrous post-9/11 military interventions in Afghanistan and Iraq. In short, US leadership has been wanting for some time, and where vacuums were created, nations like China were all too willing to fill them – not out of any desire to confront Washington, but rather as the natural development of a global community not longer tied to the singularity of American economic and military dominance.

The US today is a nation in decline. This does not mean that it is going the way of the dinosaur – far from it. The US is, and will continue to be for the foreseeable future, a major power with unmatched global reach. But the day of guaranteed American supremacy has gone.

Indeed, this decline has been hastened by the impact of the global Covid-19 pandemic, which has found America wanting in terms of both a domestic and international response. Serious social inequities in terms of race relations, health care failures, and economic fundamentals have manifested themselves in a divisive domestic political reality that further encumbers the US in terms of projecting leadership abroad.

The gloomy assessment contained in the ‘Military and Security Developments Involving the People’s Republic of China’ report is causally linked to this decline. There is a psychological disorder known as ‘projection’, which refers to the unconscious act of taking emotions or traits one finds disagreeable about themselves, and attributing them to someone else. The Department of Defense is guilty of this psychological projection when it comes to its assessment of China.

US is stuck in Cold War thinking; Plan to spend Russia & China ‘into oblivion’ in arms race will bankrupt only America

As a nation in decline, the US is unable and/or unwilling to accept this new reality, and as such is incapable of carrying out the kind of self-diagnosis necessary to slow or halt this decline. As other nations, such as China, step into the breach created by a US power in retrograde, American policy makers – rather than attribute the Chinese actions as a logical cause-effect manifestation of reality – instead project onto China the very behavioral traits about the US that have helped bring about its shrinking global reach and influence.

The truism that one cannot solve a problem that is not properly defined applies in full here. By projecting its own failed global ambitions onto China, the Department of Defense is failing to address the real reasons behind China’s military expansion.

While in a purely academic environment such a disconnect would provide fodder for further study, in the real world it can lead to the kind of miscalculations that lead to confrontations that might otherwise be avoided. Seen in this light, this new report exposes the fact that the real threat to global peace and security is not Chinese military expansion, but US psychological projection which defines Beijing’s actions as an existential threat that must be confronted.

Scott Ritter was a US Marine Corps intelligence officer for 12 years. As a chief weapons inspector for the UN Special Commission in Iraq, he was labeled a hero by some, a maverick by others and a spy by the Iraqi government. In charge of searching out weapons of mass destruction within Iraq, Ritter was on the front lines of the ongoing battle against arms proliferation. He has had an extensive and distinguished career in government service with assignments in the former Soviet Union and the Middle East. In 1991, Ritter joined the United Nations weapons inspections team, or UNSCOM. He participated in 34 inspection missions, 14 of them as chief inspector. Ritter resigned from UNSCOM in August 1998, citing U.S. interference in the inspections. He is the author of many books, including Scorpion King: America’s Suicidal Embrace of Nuclear Weapons from FDR to Trump; Iraq Confidential: The Untold Story of the Intelligence Conspiracy to Undermine the UN and Overthrow Saddam Hussein; Target Iran: The Truth about the White House’s Plans for Regime Change; and Waging Peace: The Art of War for the Antiwar Movement. Contributor author: Deal of the Century: How Iran Blocked the West’s Road to War,  Clarity Press. He is a graduate of Franklin and Marshall College, with a B.A. in Soviet history.