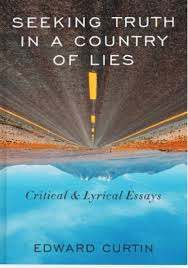 “There’s something happening here
What it is ain’t exactly clear.”
–Buffalo Springfield, “For What It’s Worth”

Happily receiving my review copy of Edward Curtin’s new book, the first thing I noticed, naturally enough, was the cover.  It comprises a pleasant picture of a Western US scene: the kind of road I traveled in my 20s and 30s; a long, deserted road heading straight towards distant snow-crested mountains.  All fine and good…except that the road is upside down—at the top of the cover–, and the mountains and blue sky seem to be falling into some “undiscovered country from whose bourn no traveler returns”!

Having read some of Curtin’s essays and poems online during the past 4 years, I was psychologically prepared to buckle my seatbelt, enjoy the unfolding, if unique, scenery, and learn and re-learn hard truths about the U.S. and our world in 2020.  And, of course, I took to heart the sub-title, too: “Critical & Lyrical Essays”; i.e., hard, political-techno-academic truths—mostly—and, lest we forget, “lyrical” essays and asides of assurance that the artistic spirit yet survives, and may yet surmount.

Among the 47 essays here, one could start almost anywhere, with any arbitrary two of them, to get a sense of what Ed is attempting.  Like many of the heroes he cites in his book, Ed does not shirk the responsibility of controversy that honest investigation and commentary will evoke: political, economic, even theological controversy….  A few essay titles reveal his rambunctious, no-B.S. spirit:

“Inside America’s Doll House: A Vast Tapestry of Lies.”
“What Are We Working for: ‘At Eternity’s Gate’?”
“The Message from Dallas: JFK and the Unspeakable”
“Why I Don’t Speak of 9/11 Anymore”
“Looking Through the Screen at the World’s Suffering”
“The Government that Killed Him Honors MLK with a National Holiday”
“Speeding into the Void of Cyberspace as Designed”
“Answering the Mysterious Call of An Artist’s Spiritual Vocation”
“Happenings in the Land of the Free and the Home of the Brave.”
“Hillary Clinton: The Heartless Queen”

Quite an assortment!  And that’s about 1/5 of the stew’s titular ingredients.  It all comes together with some very fine writing:

“The system that knows and controls so much decides human truth and what is good and evil….  No wonder all the media [are] screaming about our extinction, doomsday and the apocalypse….”

“Systemic structures of capitalist exploitation… reject millennia of human experience and the testimony of the world’s great art and spiritual experience.  It is the triumph of technical reason over the revelation of hope…[hope] rooted in love, sexuality and the human body, not abstractions.”

Much of what Ed does is about framing: How did we get into such entanglements and such bewildering enjambments?  It’s not just a matter of what, of course, but how our intertwined realities have been connected and defined.

Ed tackles horrific, defining events in his own life, and in the life of the nation and the world: the assassinations of John F. Kennedy (1963), Malcolm X (1965), and Martin Luther King and Robert F. Kennedy (1968); the Vietnam War—it’s impact on him as a Jesuit School graduate, a Marine corps gung-ho guy, transformed, by the realization of horrors we have wrought, into a conscientious objector; and, of course, the televised, unbelievable spectacle of September 11, 2001 (“9/11”).

He can render the focused, close-up view of this world, as well as the wide-angle shot: he was born in the same year Hiroshima and Nagasaki exploded in an inferno of blinding light over a defeated nation, begging for peace, enough-ness; i.e., Japan, caught in the vice of another nation, the U.S.A., whose power-elite needed to send a message to its prescribed future enemy—the U.S.S.R.—that…we can do it again, and again, and again….

Traveling with Ed along these highways and byways, we soon feel like we’re in the company of a friend whose judgment and honesty we can trust.  We won’t always agree completely…but, why should we?  Dialoguing, even dialectical dialoguing, is how we learn.

Throughout “Seeking…,” Ed introduces us to characters who have helped him shape his perceptions and perspectives.  (Some I’ve met personally; others I know through their shining work and examples.)  People like Father Daniel Berrigan, a “Criminal for Peace,” (and, not incidentally, an important 20th-Century poet).  Fr Berrigan “had been arrested for the first time at a Pentagon demonstration” in 1967.  A few days later, he and others “had upped the ante…by pouring blood on draft files in Baltimore.”

An “inspirational college teacher” of Ed’s, and a friend of Dan’s, had arranged a 3-day meeting/counselling/guidance between Ed and Dan: “walking and talking, talking and walking, we whirled around the Cornell campus where Dan was a chaplain.”  One can imagine the impact of that meeting with the infamous “peacenik,” that war-resister, on the young, stretching-his-wings, Curtin: “I, a 23-year old Marine intent on declaring myself a conscientious objector before my reserve unit was activated and sent to Vietnam.”

Other hitchhikers and welcome guests come along for the ride, spicing the conversation, always taking meditative turns.  Albert Camus takes Sartre’s “No Exit” Existentialism out of the Inferno into more lyrical realms where we can wander and wonder about the meaning of life, the passing immediacy, and transcendence beyond time.

What a confusing, awful, and exhilarating time to be alive!

What and whom can we trust?

Mighty questions for this Pandemic Age, as well….

As noted, Ed Curtin is an important guide as we travel this upside-down highway.  Orwell is another frequent guest in the caravan.  Didn’t he warn us decades ago, turning the last 2 digits of the year when he wrote his masterpiece, 1948, turning those digits around to derive the title, “1984”?  And haven’t we been living in this masticated world of mass-illusions and delusions since the age of mass-communications—the “yellow journalism” of Hearst’s newspapers that propagated our Spanish-American (imperialist) war of the 1890s; and the beginning and popularity of “motion pictures” in the 1920s; the magic of radio and F.D.R.’s “fireside chats” in the 1930s; the wonder of television—a “guest invited into our homes” in the 50s–; popular music, fueling the positive and negative energies of youth…. And now what?  We hardly talk to one another.  We do not dialogue and converse.  Our smart-phones and computers know us better than our families and friends!

“All real living is meeting,” Martin Buber taught us.  And, with Ed, we meet, and learn from, hawk-eyed journalists like Lisa Pease in the chapter entitled, “The Assassination of RFK: A Lie Too Big to Fail.”  Ed notes: “Lisa Pease correctly says that ‘the CIA takeover of America in the 1960s is the story of our times.’”  And lets Ms. Pease conclude: “Should America ever become a dictatorship, the epitaph of our democracy must include the role the mainstream media, by bowing to the National Security state, played in killing it.”

This book is a keepsake—not just for one’s “Favorites” file (O the times!  O the technophilia!) but, for engraving in the mind and heart.  (Yes!  The two together, as Curtin notes herein, inseparable in our deepest understanding/knowledge/pathos of life!)

Ed travels this inverted road with us.  He shows us how to connect the dots, to make sense of the Void (within and without).  How to get beyond the mass-media and social-media deceptions; our defined and confined world and vision.  Even, how to make space for the spiritual, mystical and inexplicable.  How to find clarity and meaning, sometimes even beauty, a “La Grande Jatte” amidst the pointillistic dots; as Frost put it about poetry: “a momentary stay against confusion.”

Anticopyright: Editorials and articles originated on TMS may be freely reprinted, disseminated, translated and used as background material, provided an acknowledgement and link to the source, TMS: Something’s Happening Here, is included. Thank you.

One Response to “Something’s Happening Here”