A Russia-China Military Alliance Would Be a Bulwark against America’s Global Imperialism. Is It Time for Washington to Panic? 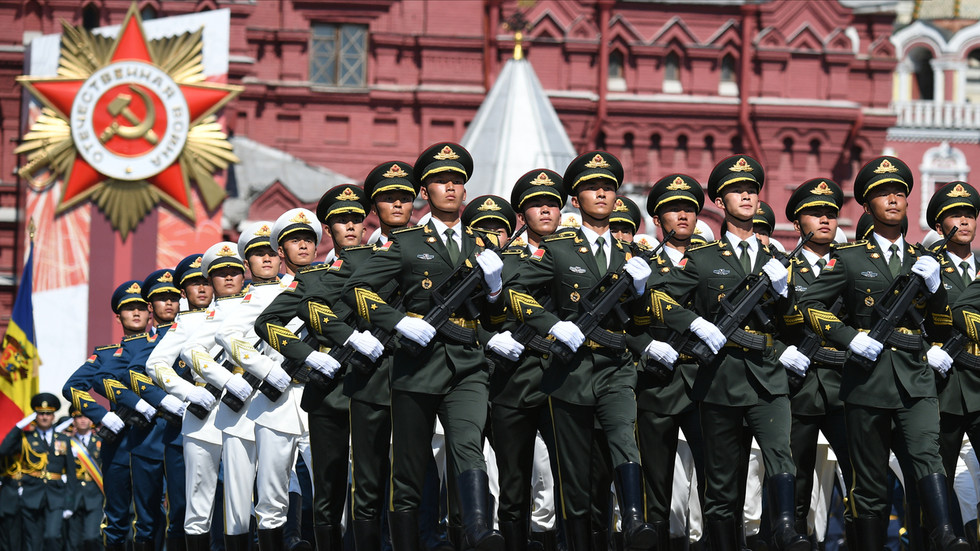 Servicemen of the Chinese Armed Forces march along Red Square in Moscow during the military parade to commemorate the 75th anniversary of Victory in World War II. © Sputnik / Ramil Sitdikov

23 Oct 2020 – Vladimir Putin says it’s ‘quite possible to imagine’ a full-blown defense pact between Moscow and Beijing in the near future. Such a deal would transform the geopolitical balance – and be a big headache for the US and NATO.

Just over 70 years ago, Stalin and Mao haggled in Moscow to create the short-lived Sino-Soviet treaty. With China’s Communist Revolution still fresh, Beijing turned to the Soviet Union for economic and military support in securing its new state. Ideologically on the same page, the two powers had a common enemy: the United States and its allies.

By securing a friendship with China, Stalin ultimately hoped to tilt the balance of the Cold War away from Europe and into Asia, giving him a strategic advantage over NATO.

History may be about to repeat itself. Russian President Vladimir Putin yesterday commented that he could not rule out a potential military alliance between Moscow and Beijing. Although he observed such a bonding was not currently necessary, he noted, “theoretically, it’s quite possible to imagine it,” and that, “without any doubt, our cooperation with China is bolstering the defense capability of China’s army,” and “time will show how it will develop … we won’t exclude it.”

Also: A powerful & game-changing Russia/China military alliance is ‘quite possible’ in future but not on the cards yet, says Putin

Undoubtedly, China’s strategic ties with Russia are getting stronger. Although they do not see eye to eye on absolutely everything, what’s bringing it to this? And what would the consequence of such an alliance be? Ultimately, the two countries are again finding themselves united by the premise of “The enemy of my enemy is my friend,” and facing up against the United States and its treaty allies. This has already resulted in extensive military and technological cooperation. The outcome, however, of a formal military pact would be troublesome for Washington, shifting the balance of power across the Eurasian landmass, as well as on the specific frontiers on which it has sought to target Russia and China.

The turning point for growing strategic affiliation between Beijing and Moscow commenced in 2014. Faced with the Ukrainian crisis and Western sanctions, Putin turned to China to diversify Russia’s economic strategy, signing several landmark gas pipeline agreements that saw the Russian Federation deepen its role in providing energy to China. In turn, this period also saw Russia become a pivotal component of Beijing’s Belt and Road initiative, allowing Chinese investment to connect Eurasia with ambitious infrastructure developments, including the construction of roads and railways through Russian territory that have allowed China to establish direct land routes to European nations.

But as this economic relationship has intensified, so has the military one. China, too, has found itself at the forefront of growing antagonism in recent years from the West, not least the United States. While Russia’s concern has been the frontier of Eastern Europe and the expansion of NATO eastwards, China, on the other hand, faces a growing military presence by the US and its allies around its maritime frontier in the South and East China Seas, with Washington touting its “free and open Indo-Pacific” initiative as a bid to contain Beijing. Both countries are secure within their continental landmasses, but face constant strategic headaches over these “hostile peripheries,” and herein is where common interests coverage into the military cooperation.

Read more: Peace is endangered not by Chinese military expansion, but by a declining, fragile US viewing its actions as an existential threat

What impact would such an alliance have? A formal agreement would ultimately pose problems for America and its allies. First of all, in North East Asia around the Korean peninsula and Japan, a Russia-China partnership would change the balance of power comprehensively, especially in terms of air and naval power. The addition of Russia into the South China Sea disputes would also expand Beijing’s dominance across the region, particularly in the air, were China to offer access to bases in this region. Likewise, the addition of Chinese capabilities in Europe would also pose new challenges for NATO. The pairing would also turn the balance of nuclear forces in the world against the US, probably provoking an arms race.

Of course, this is all hypothetical. The countries have growing interests and they are first likely to intensify their strategic, economic, and technological cooperation – for example, Russia is providing a bastion for Huawei while the US attempts to force it out of Western markets – but, nonetheless, this is not quite enough to form a committed marriage. Moscow and Beijing have differences. An involvement of China on Europe’s NATO front would further sour its attempts to improve trade and investment relations with the European Union, while Russia likewise continues to have interests in dealing with India, which has been a forefront of Chinese military friction.

However, one may note that these differences aren’t bucking the trend. Cooperation between the two countries will continue to grow – at the very least, each one serves as a vital strategic counterweight to hedge against policies of containment, sanctions, and antagonism posed by the Western alliance. They clearly need each other, but whether this will at some point result in a formal military alliance is not yet certain. But it is a prospect that will surely worry Western policymakers.