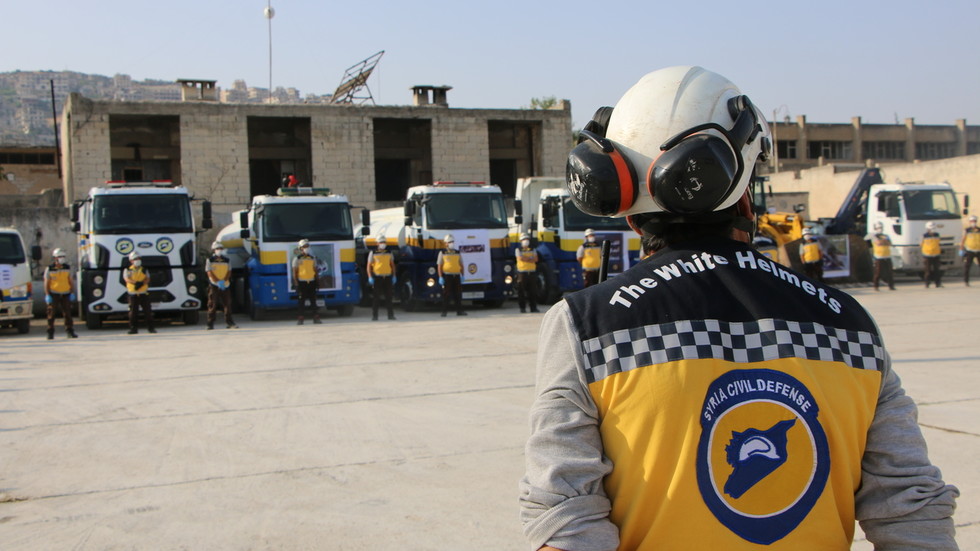 24 Oct 2020 – The BBC is preparing an attack against journalists, former diplomats, academics and scientists who challenge the dominant pro-war narratives against Syria underpinned by the pseudo-humanitarian White Helmets.

The British public broadcaster has sent out requests for comments to those who have dared to expose the role the UK government and its intelligence agencies have played in the destabilization of Syria, which look more like neo-McCarthyist charge sheets. The producer of an upcoming Radio 4 documentary series had been in email and telephone conversation with the author of this article, as well as Peter Ford, former UK ambassador to Syria, and members of the Working Group on Syria, Media and Propaganda (WGSMP) since June 2020. The result of those conversations, during which the evidence emanating from serious scientific research and on-the-ground testimony was presented to the producer, was a familiar list of accusations of “conspiracy theorism” and suggestions of “incentivized” Russian or Syrian bias.

2. I stand by my statements to that effect. This was threat fm BBC:

"That you call the White Helmets a ‘legit target’ in order to back the right of the Syrian and Russian military in their efforts to bomb them." …..

Fellow independent journalist Eva Bartlett has spent long periods of time inside Syria, reporting from many of the most high-risk areas during the Syrian Arab Army allied campaigns to liberate swathes of Syrian territory from the US coalition-proxy occupation. She had this to say about the email she received a few days ago:

“The questions emailed to me by the BBC evidence a predetermined intent to character assassination. This approach shows an utter lack of journalistic integrity on the part of the BBC.

The BBC’s hostile insinuations against me arrogantly infer that neither I nor the Syrians I interview think for ourselves, but are puppets of the Syrian and Russian governments. My journalism dates back to 2007 and is quite extensive, with 13 years of on the ground experience, from Palestine and Syria, to Venezuela and eastern Ukraine, and elsewhere.

My focuses have been on giving voice to Syrians disappeared by corporate media, highlighting the terrorism they endured by terrorist groups which the West dubs “rebels,” and highlighting war propaganda by outlets such as the BBC.”

It was clear from the BBC’s line of questioning that this was not a genuine investigation into the life and times of White Helmets founder, and former British military intelligence officer, James Le Mesurier. It is effectively a damage limitation exercise designed to discredit the evidence that points to the White Helmets being a propaganda construct with extremist connections funded by the US/UK coalition to vilify the Syrian government and allies, thus justifying military intervention by proxy and aggression against a sovereign nation. The aggression includes economic sanctions that have devastated the Syrian economy and caused widespread poverty and food insecurity among the Syrian people.

The upcoming BBC programme – ‘Mayday’ – appears to be an attempt to whitewash British intelligence operations inside Syria. Operations that were recently further exposed following the leak of alleged UK Foreign Office documents, reported by Grayzone, which detailed the extent to which the UK government provided media and PR support to the armed groups in Syria. Those groups effectively include Al Qaeda and Islamic State (IS, formerly ISIS) affiliates such as Jaysh Al-Islam and Ahrar Al-Sham, who are responsible for the horrific bloodshed and devastation of infrastructure in the areas they invaded and occupied.

The UK and EU government-funded Mayday Rescue organisation was established by Le Mesurier to provide an intermediary management of the funds the UK government was providing to the White Helmets as they embedded themselves with armed groups in extremist-controlled areas throughout Syria, more recently exclusively in Idlib, the last remaining and “largest Al Qaeda haven since 9/11.” Le Mesurier died in November 2019 having fallen from the balcony of his Istanbul home which he shared with his third wife, Emma Winberg. Three days before his death, which was ruled a suicide, Le Mesurier had reportedly admitted to defrauding Mayday Rescue of funds provided by UK and European governments.

It is also worth a reminder that the Dutch government had withdrawn funding from Mayday Rescue in 2018 following an extensive investigation that had concluded a lack of assurances that funds were not being hijacked by the armed groups in Syria, including Al Qaeda.

The BBC pins its arguments on the view that the White Helmets are a “humanitarian” organisation – an Oscar-winning illusion that has been dismantled by some of the most acclaimed independent journalists and researchers of our time, including Cory Morningstar, Rick Sterling, Eva Bartlett, Stephen Kinzer, Robert Parry, John Pilger, Gareth Porter, Ray McGovern, Phillip Giraldi, Craig Murray and former UN weapons inspector Scott Ritter, to name just a few.

Former White Helmets says all you need to know about this natural born liar. The image is from Yemen; the Russian bombers were photoshopped in. How this known Al Qaeda sympathizer was allowed to live in NYC is beyond me. Below find the original photo. See anything different? pic.twitter.com/rgJaM701Xo

The former UK ambassador to Syria, Peter Ford, also received the BBC bill of indictment and he issued this statement in response:

“The BBC have systematically tried to suppress views on Syria which run counter to the standard one-sided narrative. This programme’s efforts to smear dissenters takes BBC conduct to a new low. By alleging conspiracy theorising where there is only evidence-based reporting and analysis, the BBC is showing its frustration at being unable to stifle truth-telling.

The only conspiracy here is whatever coordination has taken place between the BBC and British authorities responsible for failing to achieve regime change in Syria despite throwing many millions of taxpayer money at the effort. Why is the BBC not drawing attention to the biggest failure of British foreign policy since Suez, as judged by its self-proclaimed objective of removing Assad, rather than busying itself with trying to take down unsupported individual dissenters who have ranged against them the vast wealth and resources of the establishment?

The charge of biggest failure since Suez as judged by its own objective of regime change is stinging because palpably true, and will with luck get some play in the follow up. It’s an angle that has been largely lost in the welter of detail.”

On October 5, the US and UK envoys to the UN Security Council (UNSC) led the campaign to ban the former Organisation for the Prohibition of Chemical Weapons (OPCW) director general, Jose Bustani, from briefing the UNSC meeting presided over by Russian Ambassador Vassily Nebenzia. Nebenzia accused the US/UK-led truth-suppressors of bringing the UNSC into disrepute. One week later, the BBC, a de facto UK-state-media outlet, kicked off its attack on the individuals responsible for highlighting the corruption of the OPCW and the fraud that was the final report on the alleged Douma chemical attack in April 2018.

One member of the WGSMP, Paul McKeigue, has published his conversations with the producer. Regarding the Douma incident, McKeigue informs us that “a reader of this correspondence could reasonably conclude that [..]Raed Saleh (White Helmets leader) has something to hide, and further that [the BBC producer] is, for some reason, colluding with him by helping him to avoid having to respond” to questions regarding the whereabouts of the bodies of the alleged chemical weapon attack victims. Part of my response to the BBC also alludes to the apparent suppression of evidence:

“A BBC producer, Riam Dalati, has stated publicly that the Douma hospital scenes, the site of the alleged chemical weapon attack in Syria, 2018, were staged. As has been pointed out repeatedly to Riam Dalati and the BBC, if the hospital scenes at Douma were staged so too were the films of the deceased in the Douma apartment block. The BBC have never reported this information, nor has it passed the information obtained by its producer to either the OPCW FFM or the IIT. It is extraordinary and completely unjustifiable that the BBC should be withholding this vital information from a UN linked organisation.”

Dr. Piers Robinson, the co-founder of the WGSMP, accused the BBC of suppressing truth:

“The BBC is also attempting to smear academics researching alleged chemical weapons attacks in Syria as ‘conspiracy theorists’, even though their work has been supported by the leading chemical and biological weapons expert the late Julian Perry Robinson and vindicated by whistleblowers and leaks from the OPCW itself. The BBC is not engaging in journalism but rather suppression of the truth.”

Easy, quick poll. Do you trust the #BBC?

In conclusion, the BBC is not an honest broker. Our work as journalists and researchers is to mine for the truth. The BBC’s output, especially with regards to foreign affairs, is produced in lock-step with UK foreign policy objectives. In the context of the war against Syria, this has resulted in a pattern of omission and censorship that has underpinned UK FCO efforts to foment conflict within Syria and to overthrow the internationally recognised Syrian government.

The result has been an illegal war that has caused death and suffering for millions of Syrian people. Regarding the UK/US intelligence-incubated, Al Qaeda-linked, White Helmets, the BBC could be considered complicit in manufacturing consent for another “humanitarian war” through their lack of “rigorous journalism” and omission of the facts surrounding this UK state-client-propaganda-manufacturer. Just as the BBC defended the WMD “dodgy dossier” that decimated Iraq and led to the deaths of millions of Iraqis, we now see the BBC rallying around the chemical weapon “dodgy dossier” that has enabled the prolongation of the barbaric war against the Syrian people.

Editor’s note: RT has reached out to the BBC producer for comment on issues raised in Vanessa’s article. A BBC spokesperson gave this response:

“The BBC’s journalism is rigorous, independent and impartial, and that will be evident to anyone who listens to this new series.”

Vanessa Beeley is an independent journalist and photographer who has worked extensively in the Middle East – on the ground in Syria, Egypt, Iraq and Palestine, while also covering the conflict in Yemen since 2015.