19 Oct 2020 – Immediately after last year’s right-wing coup in Bolivia, US elites, including many liberals, celebrated or excused the putsch against Evo Morales. Yesterday’s resounding electoral win for Morales’s party is a rebuke to all of their bloviating nonsense — and a massive triumph for democracy in Bolivia. 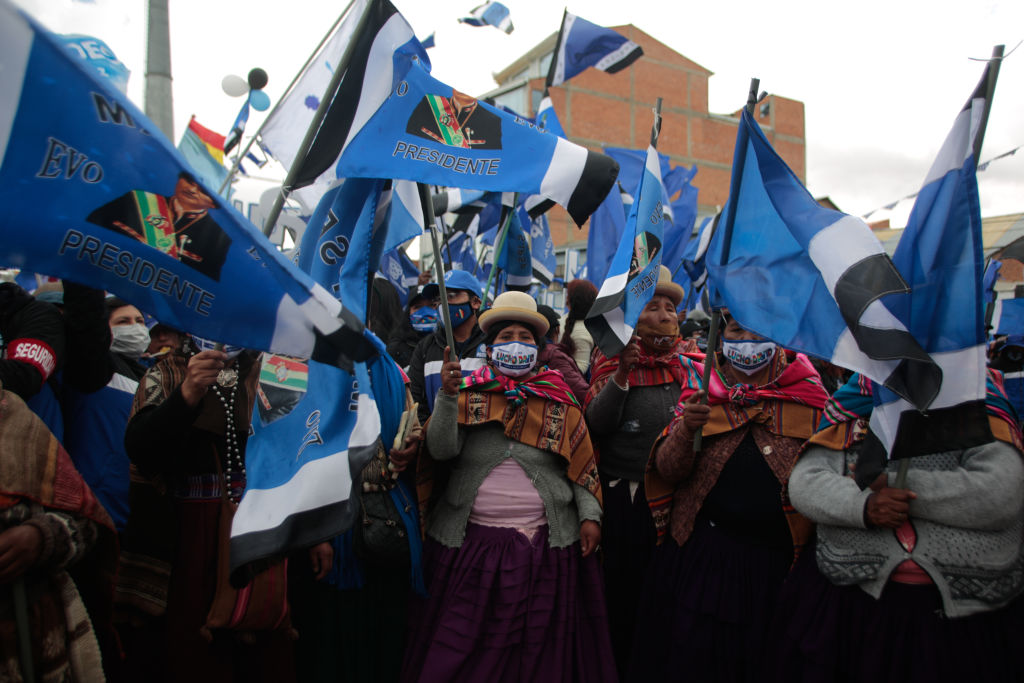 November 10, 2019 was a day of celebration in the citadels of US punditry and elite policymaking. Evo Morales was gone. The populist dragon had been slain. No longer would the “pink tide” stalk their imaginations.

The US right, veterans of defining democracy as its opposite, hailed the coup against Morales as a popular victory. According to the Wall Street Journal, the putsch represented a “democratic breakout in Bolivia.” The Trump administration praised the military for “abiding by its oath to protect not just a single person, but Bolivia’s constitution” and confidently predicted that “we are now one step closer to a completely democratic, prosperous, and free Western Hemisphere.

One of the most jubilant in the cheering crowd was Yascha Mounk — stenographer of the liberal center, doyen of populist studies. “Evo Morales’ resignation is not a coup,” Mounk said in a Twitter missive on November 11. “[I]t is one of the few big victories democracy has won in recent years.” He expanded on that bold claim in an Atlantic article the same day:

Like many populists on both the left and the right, Morales claimed to wield power in the name of the people. But after weeks of mass protests in La Paz and other Bolivian cities, and the rapid crumbling of his support both within law enforcement and his own political party, it was his loss of legitimacy among the majority of his own countrymen that forced Morales to resign yesterday.

Nowhere did Mounk mention the millions pulled out of extreme poverty, the raft of public services initiated, or, perhaps most impressively, the incorporation of indigenous people — for centuries scorned and hated by the ruling elite — into Bolivian politics as equal members. These, apparently, were incidental to the health of the country’s democracy. Morales, you see, was just like the right-winger Jair Bolsonaro (himself the beneficiary of a coup carried out against a pink-tide party that, in Mounk’s mind, was probably also a populist excrescence).

Nor did a couple weeks’ hindsight cause Mounk to change his tune. In a November 26 article, Mounk argued that Morales was trying to “incite civil war,” denounced right and left “populists” as different varieties of the same anti-democratic beast, and insisted that Morales’s removal was a boon for democracy. “The latest developments in La Paz should, whatever their result, inspire fear in the hearts of the world’s populist dictators.”

Elsewhere in the precincts of elite centrist and center-left opinion, handwringing and both-sides apologetics prevailed. The Washington Post editorial board acknowledged Morales’s successes while blaming him for the “anarchy” that had engulfed the country, and the New York Times editorial board, while declining to celebrate the coup, nevertheless solemnly concluded that Morales had to be deposed.

The forced ouster of an elected leader is by definition a setback to democracy, and so a moment of risk. But when a leader resorts to brazenly abusing the power and institutions put in his care by the electorate, as President Evo Morales did in Bolivia, it is he who sheds his legitimacy, and forcing him out often becomes the only remaining option.

All of this is worth remembering in light of what happened yesterday: Luis Arce, the presidential candidate for Morales’s MAS party, won 52 percent of the vote according to preliminary results, beating his opponents so handily that Jeanine Áñez, the leader of the right-wing coup government, was forced to concede defeat.

MAS’s crushing victory, if I can borrow a phrase from Mounk, is “one of the few big victories democracy has won in recent years.” Over the past year, Áñez’s government has persecuted MAS supporters and repeatedly pushed back elections. The US-dominated Organization of American States (OAS) doggedly circulated the lie that Morales had engaged in election fraud. The Bolivian far right — an amalgamation of anti-indigenous racists and pro-business potentates — was given time to regroup and wrest back power.

They all failed. Bolivian workers and indigenous people braved the repression and restored democracy to the country.

Sunday’s election result is a rebuke to the coup-makers and right-wingers, to the Washington establishment and Western opponents of leftist governments, to the pundits and thinkers who equate democracy with liberal capitalism and excoriate deviations from that orthodoxy as populist hysteria.

And as for Yascha Mounk? We’ll have to wait with bated breath for his opinion. His pen and his Twitter account have gone conspicuously silent.