US army plans to consolidate storage along the West Loch section of Pearl Harbor, near densely populated neighborhoods. 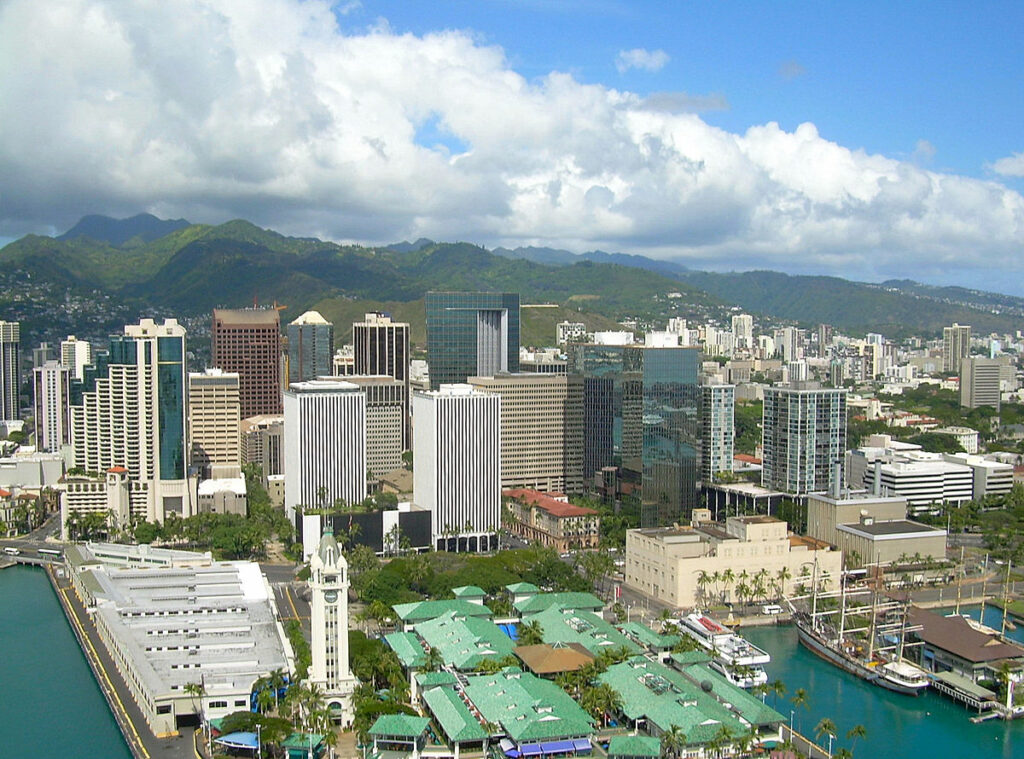 Honolulu, Hawaii in the Oahu island of the archipelago. Wikipedia

22 Oct 2020 – A munitions storage complex being planned by the US army in Hawaii to help counter Chinese influence in the Pacific is running into local opposition.

In July, the US secretary of defense, Mark Esper, called for prioritizing resources, including long-range precision weapons, to the Indo-Pacific region, a reflection of a US shift toward what it calls great power competition with China and Russia.

As part of this long-term strategic competition, the army has unveiled plans to consolidate its munitions storage along the West Loch section of Pearl Harbor on Oahu.

But plans outlined in the draft environmental assessment (EA) released by the navy, show the new facility would be built less than a mile from densely populated neighborhoods in the community of Ewa.

Human rights lawyer Poka Laenui lives less than a mile from the Lualualei Annex in the rural district home to many Native Hawaiians. He said communities that host munitions storage facilities are routinely dismissed and ignored by the military.

“When you’re playing with the lives of everyone in Hawaii with that kind of stuff, you have to have participation by the people whose lives are being affected,” Laenui said. He asked how the public can make sound decisions when they are denied information.

Construction is slated to begin in 2022 on a facility intended to improve army “operational efficiencies”. The 62-acre site would include 35 earth-covered reinforced concrete storage magazines and operational support facilities within the 4,092 acre West Loch ammunition depot.

If completed, the proposed facility would allow for the consolidation of munitions stockpiled at the ageing Lualualei Annex, a storage complex built in the 1930s on west Oahu. A new facility at West Loch, the navy said, would improve safety by reducing the need to transport military-grade explosives on public roads.

Home on the firing range

Immediately adjacent to the proposed munitions storage facility is Ewa Gentry, one of West Loch’s largest new residential developments with over 8,000 homes and hundreds more planned. Debbie Luning, the Gentry Homes director for community relations, said the developer wants assurance that the munitions storage will not jeopardize public health or safety.

“Because of the pandemic, there has been inadequate public outreach to provide the community with details of the project,” she said, calling for a decision on the location of the facility to be postponed “until it can be properly presented to the area residents”.

“I still don’t believe that the Ewa community as a whole knows what’s going on.”

John Rogers, an Ewa neighborhood board member, also sits on the board of a homeowners association representing 720 homes immediately north of West Loch. Rogers, a retired navy petty officer, said the community had not been given adequate opportunity to ask questions. When he requested a public meeting with the navy, he was told a presentation was not part of the process.

Rogers said, “I still don’t believe that the Ewa community as a whole knows what’s going on.”

In an email, a navy spokesperson said, “The safety of community residents is of the utmost importance, and explosive safety is calculated with extreme care and scrutiny.” But the navy considers ammunition types and amounts sensitive information and does not disclose calculations to the public.

According to the navy, which controls the land, impacts to public health and safety, socioeconomics, environmental justice and other criteria would be “negligible or nonexistent” and so possible effects on air quality, hazardous wastes and materials, noise, water, marine biological and other resources were not analyzed in detail.

But a growing number of Ewa residents have questions and say an environmental assessment is insufficient. They want the military to prepare a more rigorous environmental impact statement and hold public meetings.

Until 30 years ago, much of the Ewa plain was planted in sugar cane and the population was small, but Ewa and neighboring Kapolei have swelled into Oahu’s second city and are home to many active-duty and retired military members and their families.

Today few residents are old enough to remember the military disaster of 1944 when 163 service members were killed and nearly 400 injured in a series of explosions at West Loch, which the military covered up until 1960. A second, deadlier munitions disaster occurred at the Port Chicago naval magazine in California less than two months later. More recent military accidental explosions in Siberia and Ukraine, and the non-military explosion in Beirut in August, serve as graphic reminders of potential dangers.

One Ewa resident who is alarmed by the site’s proximity to hundreds of homes and public thoroughfares is John Bond, a historian and army veteran. He has been studying archival military documents and safety buffers called Explosive Safety Quantity Distance arcs in Hawaii and at other military sites. Bond sees serious problems with West Loch and has documented his findings on a blog.

According to Bond, the explosive arc would not provide adequate protection from an explosion in the facility. He points to a military ammunition terminal in North Carolina with a three-to-four-mile arc and a more transparent process in which the public was told of potential impacts. In Ewa, where crowded neighborhoods are less than one mile from a potential blast zone, Bond said that transparency was absent.

Bond thinks residents deserve to know what would be inside West Loch’s perimeter fence. “Nobody is telling people out here this. The public needs to know,” Bond said. “This affects everything – insurance, disclosure to potential home buyers, land development, homes, codes, schools.”

West Loch has been ignored for years, Bond said. “Nobody really understood or maybe didn’t want to know what was there. It didn’t affect their daily life, but that’s all going to change.”

Findings of no significant impact

The Hawaii state senators Kurt Fevella and Mike Gabbard represent neighboring districts that border West Loch. Both have requested public meetings and more transparency. Gabbard said his constituents were not anti-military, but called the lack of response “frustrating”.

In an email, the navy said public meetings were not required under federal law for environmental assessments. Instead the navy prefers to engage with neighborhood boards through a liaison. A navy spokesperson added that the environmental assessment was on the army and navy public websites (it has since been removed) with print copies available in public libraries.

Unanswered questions have also fueled suspicion that former nuclear weapons storage sites on Oahu may still or will again house nuclear weapons. Hans Kristensen, the director of the Nuclear Information Project at the Federation of American Scientists, rejected that idea. “The rumors are false,” he said by email.

A spokesman for the US Indo-Pacific Command would neither confirm nor deny the presence of nuclear weapons and the navy declined to comment on what kind of conventional munitions would be stored at West Loch, leaving residents to speculate and search for answers on their own.

Jon Letman is a freelance writer based in Hawaii, covering human rights, the environment, and US foreign policy in the Asia-Pacific region.