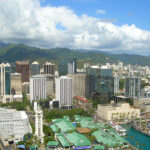 22 Oct 2020 – A munitions storage complex being planned by the US army along the West Loch section of Pearl Harbor near densely populated Hawaiian neighborhoods to help counter Chinese influence in the Pacific is running into local opposition. 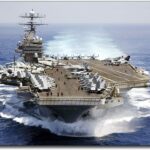 31 May 2020 – Hawaii’s “garden island”, Kauai, is known for its breathtaking scenery and laid-back vibe, a place of plunging waterfalls and cliffs cloaked in green tropical forests. But beyond its beauty it is one of the Pentagon’s most valued testing and training sites in the Pacific. But some residents view the islands’ highly militarized state as misguided or even illegal.

The U.S. Is Militarizing the Pacific — And Not Taking Questions
Jon Letman – Foreign Policy In Focus, 4 Apr 2016

30 Mar 2016 – The biggest U.S. military re-alignment in a generation may be underway in the Asia-Pacific. But most Americans know nothing about it. Hawaii’s members of Congress sit at the linchpin of a huge realignment of U.S. military power. Good luck getting them to talk about it.

Opening a remote border region to development threatens to destroy Central Asian wilderness and culture. The plot is familiar – giant multinational corporations want to develop a controversial gas pipeline – but the setting is anything but familiar. As Jennifer Castner, director of The Altai Project, dedicated to protecting the natural and cultural heritage of Altai says, “Gazprom wants to build this pipeline. I don’t think they care what they have to do in order to do it.”