Kauai has one of the Pentagon’s most valued testing sites. It’s an economic driver, but some residents say the military shouldn’t be on the islands at all. 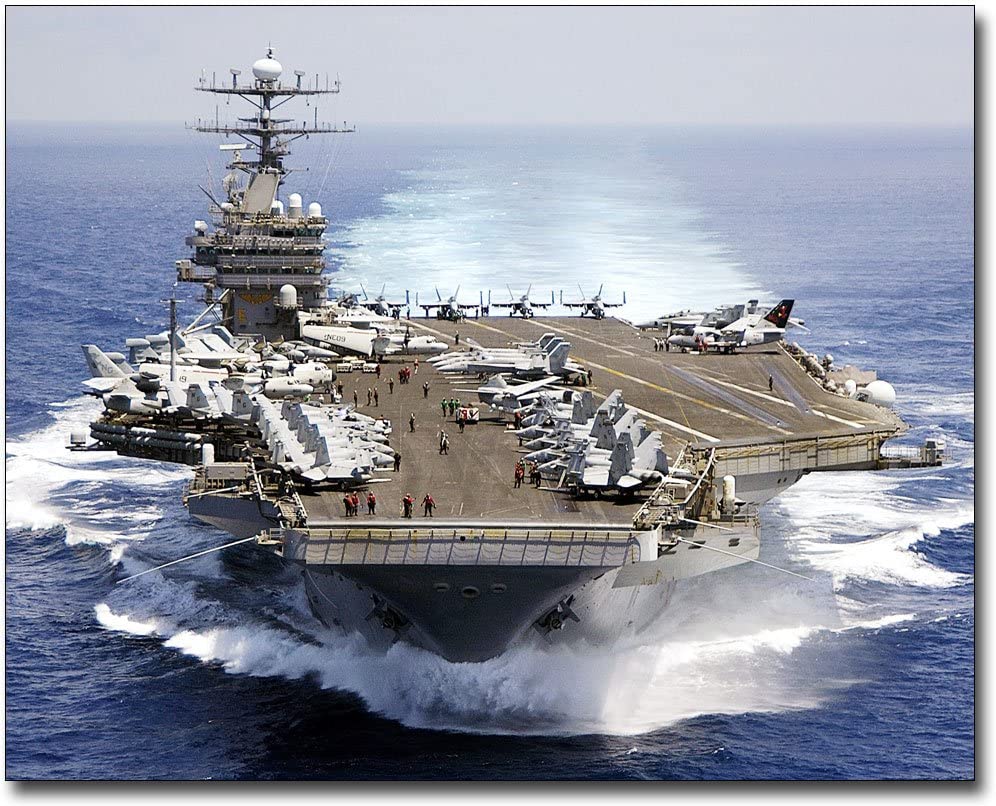 The aircraft carrier USS Carl Vinson participates in a group sail during the Rim of the Pacific exercise off the coast of Hawaii. Photograph: Petty Officer 1st Class Arthurgwain Marquez/AP

31 May 2020 – Hawaii’s “garden island”, Kauai, is known for its breathtaking scenery and laid-back vibe, a place of plunging waterfalls and cliffs cloaked in green tropical forests. But beyond its beauty it is one of the Pentagon’s most valued testing and training sites in the Pacific.

In Hawaii, where the military is the second-largest economic driver, after tourism, weapons testing and training enjoy widespread support, but some residents view the islands’ highly militarized state as misguided or even illegal.

In missile defense circles, Kauai is known for its outsized role in weapons testing at the navy’s Pacific Missile Range Facility Barking Sands (PMRF), which its commanding officer, Capt Timothy Young, likens to a sports stadium that provides a venue for customers (weapons manufacturers, government agencies and military branches) to train people or test new technology.

That technology includes ballistic missiles, rockets, drones and hypersonic weapons. In March at PMRF, the US navy and army collaborated in the test launch of a common-hypersonic glide body, which the Pentagon described as a major milestone in its goal to enhance its “hypersonic warfighting capabilities in the early- to mid-2020s”. Donald Trump said China and Russia had left the US no choice but to develop hypersonic weapons, which he described as “super duper” missiles.

Hypersonic weapons fly faster than five times the speed of sound, making it possible to hit targets thousands of miles away in minutes. The US, Russia and China are all investing heavily in them.

Young declined an in-person interview but in an email said: “We test systems and facilitate the fleet’s training that ultimately enable our safety and security.”

As the island’s third-largest employer, PMRF also provides jobs that are attractive in a community where the tourism and service sector often pay less and are vulnerable during disruptions like the coronavirus pandemic and associated mandatory 14-day quarantine for all visitors from outside the islands.

Young said he appreciated the relationship the base has with multi-generational Hawaiian families. He added that PMRF partnered with local businesses to encourage science, technology, reading and math education. “It’s not only the right thing to do when helping to educate our young people, but it also makes good business sense to develop a local workforce.”

PMRF will soon be offering even more jobs on the island as Hawaii’s air national guard stands up the 293rd offensive space control squadron using existing infrastructure on the base.

The squadron will be one of four units administered by the national guard in California, Colorado, Florida and Hawaii. Tasked with space electronic warfare, the squadron’s primary mission will be “to protect and defend satellite communications systems”, said Ryan Okahara, the Hawaii air national guard brigadier general.

Kauai’s mayor, Derek SK Kawakami, welcomes the military presence, saying PMRF sets a good example of how a military base can be embraced by the community through its volunteer efforts, emergency relief contributions, public outreach and openness to civilians.

“Whether we have a military here or not, if we’re making enemies out there, we’re a target and so it’s best to have at least a shield of defense to protect our people,” Kawakami said. “Because we have a presence here, it makes us less vulnerable than not having a presence.

“Historically, Hawaii has been a strategic location for national and international defense,” the mayor continued. “I understand many people may have mixed feelings about that. For myself, I understand the importance of keeping our nation protected and our state protected.”

Kyle Kajihiro, an instructor with the department of geography and environment at the University of Hawaii at Manoa, said: “The technologies involved in these space programs are not only for defense; they can also enhance offensive capabilities. The expansion of these programs in Hawaii would cause countries who may be in the crosshairs of US war plans to perceive us as a threat.

“History teaches us what happens when other powerful countries weaponize our islands … If the 2018 false missile alert did anything positive, it forced a conversation about how the massive military presence puts a big target over these islands.”

Sparky Rodrigues, a Native Hawaiian activist opposed to the military in Hawaii, called the US military presence, which dates back to the 1893 overthrow of the Kingdom of Hawaii, an illegal occupation. The bombing of Pearl Harbor, Rodrigues said, wasn’t an attack on Hawaii but on the US military.

“They have basically occupied the space, taken the land, denied access to our resources from long ago, and we are now stuck with them holding the checkbook that supports our families.”

That sentiment has caused a rift in the Hawaiian community. “We are being poisoned and fed at the same time,” Rodrigues said. “The military has poisoned our economy, they’ve poisoned our land, they’ve poisoned the air. Every time they do training and missile firing, there’s contamination that goes into the environment … I don’t want Hawaii to be known as the purveyor of death.”

Base proponents value PMRF as a facility that can accommodate testing and training below the sea, on land, in the sky and in space. In 2018, Japan’s ground self-defense forces achieved a first when they launched Type 12 surface-to-surface missiles and Himars rockets at PMRF during the huge Rim of the Pacific maritime exercises.

PMRF also hosts the Kauai test facility, operated by Sandia, one of the department of energy’s national nuclear laboratories. KTF, which has operated on Kauai since 1962, has supported more than 450 launches, including a series of experimental rocket tests in 2019 to test new technologies being considered for future nuclear weapons life-extension programs.

“They have occupied the space, taken the land … and we are now stuck with them holding the checkbook that supports our families.”
— Sparky Rodrigues

Aegis Ashore, a land adaptation of a ship-based BMD system, was introduced to a US naval base in Romania in 2016 and will deployed at a missile defense facility in Poland where it is years behind schedule and $96m over budget.

Japan also plans to deploy Aegis Ashore in two locations by 2025. In 2019 and earlier this year, Japan’s defense minister traveled to PMRF to inspect the system. And while Tokyo and Washington insist Aegis Ashore is meant to defend against North Korea and Iran, both Moscow and Beijing see the system as an offensive threat.

Patrick Shanahan, the former acting secretary of defense, may have stoked those fears when he announced US policy would “shift towards greater integration of offensive and defensive capabilities because missile defense necessarily includes missile offense”.

PMRF’s expanding role comes at a time of heightened tensions between the US and Russia, China, North Korea and Iran. What’s more, countries around the world are facing the coronavirus pandemic and an economic freefall, with markets plunging, businesses collapsing and the world driven into crisis.

The US Congress has already passed nearly $3tn in emergency response packages to the Covid-19 pandemic, as the Trump administration’s 2021 budget sharply increases spending on nuclear weapons, including a new low-yield submarine-launched nuclear weapon and a spending surge on intercontinental ballistic missiles.

With the 2019 demise of the INF treaty, the US withdrawal from the Iran nuclear deal, growing worries that the US appears poised to abandon the bilateral New Start treaty, which might not be renewed in 2021, and the US Missile Defense Agency seeking new ways to use BMD systems, PMRF’s role appears likely to grow.

William Hartung, the director of the arms and security project at the Center for International Policy, worries about the lack of public awareness of dramatic policy shifts or scrutiny of emerging technologies, such as hypersonic weapons, that reduce an already short response time to missile launches, as well as the further weaponization of space.

“I think the economic impact of these military facilities all over the country is a big obstacle to changing how we spend our money, what kind of weapons are pursued, what nuclear policy we have, how we approach space,” Hartung said.

“Because these places become entrenched, local communities depend on them economically and then there’s less inclination to question the value or the danger of the activities that are going on.”

In the face of institutionalized military opacity, Hartung said there was an incentive for the military to avoid openness because “transparency can lead to criticism, criticism can lead to changes in policy, and so if they can stick to generic language and general boilerplate it may serve their interests. But they’re sort of short-term interests, they’re parochial interests.”