The U.S. Is Militarizing the Pacific — And Not Taking Questions

Hawaii’s members of Congress sit at the linchpin of a huge realignment of U.S. military power. Good luck getting them to talk about it. 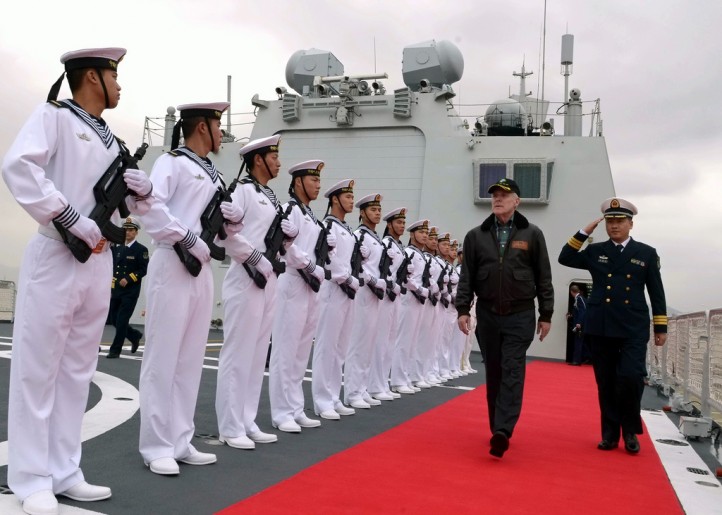 30 Mar 2016 – The biggest U.S. military re-alignment in a generation may be underway in the Asia-Pacific. But most Americans know nothing about it.

Unveiled in 2011, the “Pacific Pivot” aims to transition U.S. military and diplomatic resources away from the Middle East and toward the world’s most populous and economically dynamic region.

The United States already has enormous resources invested in the region — including tens of thousands of troops, large aircraft carrier groups, and mutual defense treaties with powerful countries like South Korea and Japan. The pivot aims to bolster that military presence, as well as secure more political cooperation from U.S. allies and boost trade through major pacts like the Trans Pacific Partnership, or TPP.

“The United States is a Pacific Power,” President Obama told the Australian parliament in November 2011, “and we are here to stay.” In the shadow of a rising China, Obama promised that Washington “will allocate the resources necessary to maintain our strong military presence in this region.”

In a sprawling 5,500-word article in Foreign Policy, then-Secretary of State Hillary Clinton described America’s role in the region as “vital,” “essential,” and “irreplaceable.” For a few companies, it could also be lucrative: Key components of the strategy, Clinton explained in 2011, are strategic economic partnerships and international trade agreements like the TPP.

Under pressure from the Bernie Sanders campaign, Clinton says she now opposes the TPP. But it remains a key plank of the U.S. strategy to pull countries in the region into its sphere of influence. Secretary of Defense Ash Carter has said that “passing TPP is as important to me as another aircraft carrier” — though he’s asking for actual armaments too, including “high-end capabilities” like the new long-range stealth bomber and anti-ship cruise missiles.

Though overshadowed by unrest in the Middle East, the pivot remains very much underway. Already the U.S. has expanded and established new military exercises and agreements with Japan, South Korea, Australia, New Zealand, Singapore, Vietnam, the Philippines, and other parts of Southeast Asia — as well as Myanmar, Bangladesh, India, Mongolia, and even China.

The linchpin of this military realignment is my home state of Hawaii, which has hosted the headquarters of the U.S. Pacific Command, or USPACOM, for almost 70 years.

Based on the island of Oahu, USPACOM claims the Asia-Pacific as its “area of responsibility.” Home to 36 nations — and more than half the world’s population — the region stretches, in the words of top military brass, “from Bollywood to Hollywood and penguins to polar bears.”

Unfortunately, members of Congress who should be prepared to explain their positions aren’t talking. Specifically, I’m referring to Hawaii’s four-person congressional delegation — which represents the one U.S. state that truly is Asian and Pacific.

I spent over a year reaching out to Senators Brian Schatz and Mazie Hirono and Representatives Tulsi Gabbard and Mark Takai. Collectively the four Democrats serve on committees, subcommittees, and caucuses that oversee foreign affairs, intelligence, naval issues, four branches of the military, and relations with critical Asia-Pacific nations, among other relevant portfolios. Furthermore, both Gabbard and Takai are active members of the National Guard and have served in the Middle East.

None of the four was willing to be interviewed about their views on the pivot, or U.S. military policy in Asia more generally. I learned this after making dozens of phone calls and sending scores of emails over a 13-month period. I even approached Gabbard, whom I’ve interviewed before, in person following a Veteran’s Day ceremony in an attempt to schedule an interview.

Sometimes patience and persistence just aren’t enough. Even after submitting questions and providing an editor’s letter of intent (for Hirono), none would take my questions in writing, in person, or by telephone. Staff responses were sporadic and difficult to get.

Finally, my requests were ultimately denied without explanation.

These weren’t “gotcha questions” designed to elicit an embarrassing response. They were straightforward and honest inquiries related to U.S. policy in a key region of the world — all on subjects each of the four should have been prepared to discuss with the media.

Here were a few them:

There are more than 30 U.S. bases on Okinawa already. Do the members support construction of the new base? If so, do they believe the way the dispute has been handled is consistent with the U.S. values of freedom, democracy, and human rights?

The agreement was not voted on or ratified by the Philippine Senate or U.S. Congress. It’s opposed by many Filipinos, who say it violates their sovereignty and risks drawing them into U.S. conflicts with China. Additionally, after the initial ten-year term, EDCA automatically extends, meaning it’s not really a “ten year” agreement. Do you think Congress should debate the terms and degree to which U.S. forces can operate under an open-ended agreement in a foreign country?

For example, when the U.S. flies nuclear capable B-52 and B-2 stealth bombers in drills near the North Korean border to “send a message” to Pyongyang, is this the best way to finally end the Korean War? Can provocative measures like these lead to re-unification, or are we just provoking North Korea, playing a war-mongering yin to North Korea’s yang?

Other questions considered the United States’ responsibility to address lingering health and environmental damage from nuclear testing in the Marshall Islands, the environmental impact of expanding live-fire testing in the Northern Mariana Islands, and the implications of military cuts in Hawaii and increases in Guam.

In her article promoting the pivot, Hillary Clinton wrote that the U.S. presence in the Asia-Pacific “ensures stability and security” and “defends freedom and transparency in the military activities of the region’s key players.”

Yet all four members of Hawaii’s congressional delegation spent more than a year avoiding a journalist — and a constituent — trying to conduct a single interview on the subject. There’s nothing transparent about that at all, especially since Hawaii is the headquarters for many of these operations.

That’s a shame. Because real answers to these questions might have exposed a system that puts military, political, and financial institutional interests above those of a truly just and peaceful society.

Here are a few other questions.

Rep. Gabbard recently made headlines after her endorsement of Bernie Sanders, ostensibly because of her concerns about “the cost of war.” Does that sentiment extend to having an open and frank discussion of the militarized Pacific?

Will the Pacific pivot actually create a safer, more secure world, or preserve a status quo that ensures the sale of a lot of expensive weapons systems? Does the broader rebalancing promote human rights — consider how increased militarization impacts North Korean civilians or curtails press freedoms in Japan, for example — and stability? Or does it promote and expand a global order in which trade agreements are as important as new aircraft carriers?

As a nation, we have no qualms about militarizing distant lands and stationing tens of thousands of our own soldiers in other people’s countries for decades on end. But would we accept a fraction of the same treatment for even one minute?

Perhaps one day another reporter will gain access and ask such questions to members of Congress. But for now I’m not holding my breath that they’ll answer.

Jon Letman is a freelance journalist and photographer based on the Hawaiian island of Kauai.

One Response to “The U.S. Is Militarizing the Pacific — And Not Taking Questions”