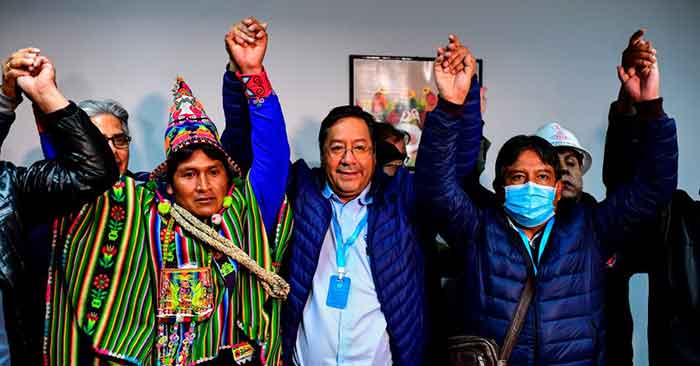 19 Oct 2020 – A year after former Bolivian president Evo Morales was ousted in a military coup that installed a far-right regime, Morales ally Luis Arce declared victory after exit polls showed the socialist candidate with a large advantage over his two main competitors.

“Democracy has won,” Arce, who served as Morales’ finance minister, said in an address to the nation after one exit poll showed him leading the race with 52.4% of the vote and former president Carlos Mesa in a distant second with 31.5%. Right-wing candidate Luis Camacho—an ally of unelected interim President Jeanine Añez—won just 14.1% of the vote, according to the survey.

Arce characterized his apparently decisive victory, which even Añez was forced to acknowledge, as a mandate to continue the policies of the Morales government, which lifted millions of Bolivians out of poverty and expanded the nation’s economy.

“I think the Bolivian people want to retake the path we were on,” Arce said Monday.

Twice postponed due to the coronavirus pandemic, Sunday’s election was a do-over of last year’s presidential contest, which was thrown into chaos after the U.S.-dominated Organization of American States (OAS) leveled baseless allegations of “fraud” by Morales, who was eventually forced to resign and flee the country under threat by Bolivia’s military.

The coup against Morales sparked a wave of Indigenous-led protests that were violently repressed by the Bolivian military and police forces, which were granted sweeping immunity from prosecution by the anti-Indigenous Añez government.

From exile in Argentina, Morales on Monday celebrated Arce’s apparent victory as a “great triumph of the people.”

“Brothers and sisters: the will of the people has been asserted,” Morales tweeted. “This is an overwhelming victory… We are going to give dignity and liberty back to the people.”