The disorder promoted from power is not even or only a symptom of incapacity, but rather a strategy for destroying democratic institutions through confusion and distraction. Repression will come afterwards. 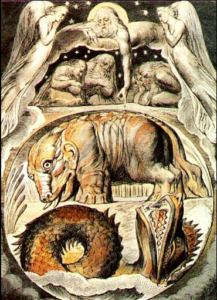 William Blake, Behemoth and Leviathan for The Book of Job

24 Sep 2020 – In the Bible’s eschatology (The Book of Job), two monsters devastate humanity and defy God. The first one is Leviathan, a serpent-shaped monster that emerges from the sea to gobble up other beings. Thomas Hobbes used it as a symbol to represent the State. His argument can be summarized as follows: the human condition (competition and envy) leads to a fratricide war. The permanent fight of all against all decimates humanity and ends up by horrifying the participants. Incapable of obtaining peace by themselves, they invoke a supreme power to repress and discipline them; thus, Leviathan appears, i.e. the authoritarian state. In sum, people accept submission in exchange for order, and get peace through fear.

However, there is another terrible beast that does not emerge from the sea but walks on earth. It is Behemoth, who destroys everything on his path. Just like Leviathan is a type of serpent, Behemoth is a type of dinosaur. This beast, as mythological symbol, has not had such a distinguished history as its rival in political science since Hobbes’ times, until in the middle of WWII a masterly analysis was published regarding the theory and practice of Nazism. Its author, Franz Neumann, was the legal advisor to the social-democratic party during the Weimar Republic and an expert on comparative political systems[1]. He was attached to the Frankfurt School of Critical Theory. His book describes the Nazi no-State, i.e. the rule of anomie that devoured the rights and destroyed the dignity of countless human beings. Neumann presented the factors that led to the collapse of the Weimar Republic.

The difference between Hobbes and Neumann, between Leviathan and Behemoth, resides in that Hobbes theorized about the State and Neumann introduced the concept of no-State. Unlike the authoritarian State, the totalitarian no-State, whether classical fascist or Nazi,  does not sustain order, but rather relies on disorder. Although it might sound as an oxymoron, it is an anarchical regime, not a traditional and established party, but rather a movement in power, or a power in perpetual movement. The rigid order of an authoritarian State, or the consensual order of a democratic State, is substituted by confusion, misinformation, and continuous mobilization. It is a destructive regime that promises to build a fortress in the future, but only after the destruction of many people and institutions. It does not establish order as system but rather practices disorder as a method.

“For me, democracy is an abuse of statistics. Furthermore, I do not think it has any value. Do you think that to solve a mathematics or aesthetic problem we need to consult the majority of the people? I would say no; thus, why would we suppose that the majority of people understand politics? The truth is that they do not understand and they allow themselves to be fooled by a sect of scoundrels that usually are national politicians. These individuals go about scattering around their portraits, making promises, sometimes threats, in sum, bribing others. For me, being a politician is one of the saddest professions of the human being. I am not saying this in reference to any politician in particular. I am saying it in general that a person who tries to make himself popular to all seems singularly to have no shame. A politician per se does not inspire in me any respect, as politician.”

In our youth, without much thinking, people like me rejected such statements as the opinion of a reactionary old man. However, Borges also told me once in a conversation in Cambridge, Massachusetts, “I enrolled in the conservative party (which had very few members in Argentina) because I thought that it was the only party incapable of eliciting enthusiasm.” The distinguished writer was aware of the irony of his previous apothegm and he mocked the way in which a democracy let itself be manipulated by the unscrupulous.

Years have passed; Borges is not here anymore, but the enraged populism of president Trump and his henchmen (among other similar populisms in Europe and in the developing world) give new significance to Borges’ words. This new virulent right-wing populism has little to do with the older popular movements in Latin America, but it is well portrayed in Borges’ sarcasm. Democracy, sometimes due to its defects, opens the door to Behemoth who will try to destroy it.

North-American democracy is under siege by those who take advantage  of the system’s defects.  Today it can be characterized as a blatant abuse of statistics[2]. How is it possible that a United States president can be elected after having lost the popular mandate in the polls by 3 million votes in 2016? The answer is clear: this is possible because the system is one of indirect elections through an Electoral College where the states whose population is small, homogeneous, mainly white and reactionary, are overrepresented in accordance with a Constitution designed for another era, 233 years ago. On the other hand, the redesign of the electoral geography by districts (gerrymandering) secures the triumph of parties that ill reflect the real composition of the population. This is a political abuse of demography. Along this path, a minority is able to climb to power and govern as a false majority. In this way, democracy can be circumvented and overthrown, not by a coup d’état, but rather by a nominally democratic and constitutional procedure.

The gimmick is not new. In a text published in 1995, the minister for clarification and propaganda of the Third Reich, Joseph Goebbels, just two years after the electoral triumph of Nazism in Germany, said: “If democracy when in opposition granted us democratic means, that could certainly only happen in a democratic system. However, we, the national socialists, never said we were the representatives of a democratic point of view, but rather we have frankly declared that we only make use of democratic means to win power and that after conquering power we would ruthlessly deny our adversaries all the advantages that in times of opposition had been given to us.”

As Harvard professors Steven Levitsky and Daniel Ziblatt affirm, democracies can very well die by democratic means, as much as or even more than due to a coup d’état or a military pronouncement[3]. According to the peculiarity of each country and its democratic system, each death has a different etiology. Likewise, once power is conquered, the means and methods to remain in it vary but they have nothing to do with genuine democratic values and practices.

The practices used by those in power, those who have previously used democracy’s weak points to arrive and once installed try to destroy it, are the following:

These manoeuvers are the equivalent of what in Argentina in the 1930s (the so-called “Infamous decade” from 1930 to 1943) was referred to as “patriotic fraud.” I will give as an example the 1937 elections in Argentina. In the majority of provinces, the method chosen by conservatives to circumvent popular will was to open the ballot boxes inside the post office and replace all the radical votes with votes for the so-called Concordancia (Concordance, the ruling front). In Buenos Aires province, fraud was more violent: conservatives did not allow ballots for the UCR (the opposition party) in the electoral booths, or they simply kicked out the representatives from the Radical Party that were appointed to guard the electoral process. Only in the Capital and in La Rioja province—where the government allowed clean voting—and in Cordoba and Tucuman provinces—governed by the Radical Party—there was electoral freedom. In all these cases, the formula opposed to the government won comfortably.

As it happened with Argentine conservative governments after the 1930 coup d’état, the Republican Party of today in the US practices “patriotic fraud” in a way adapted to current times (and it also intends to use the postal service[4]). Samuel Johnson’s apothegm is confirmed, “Patriotism is the last refuge of the scoundrel.”

In the next US general election (for president and legislative chambers) on November 4 there will be a confrontation between a diverse and multicolor democratic coalition  on the one hand, and a clique of scoundrels that will cling to power at any cost, on the other. This critical and anomalous situation has severe geopolitical implications. Despite having only 4% of the world’s population, North Americans will decide a significant part of the destiny for the remaining 96% of humanity that will not participate in the electoral scrutiny[5] but will suffer the consequences.

[5] . Of course, except through governments (among others Russia, China, Iran, Israel and North Korea) that will also try to manipulate voters from the large country of the North.