Under Chapter XI of the Charter of the United Nations, the Non-Self-Governing Territories are defined as “territories whose people have not yet attained a full measure of self-government”.

The General Assembly, by its resolution 66 (I) of 14 December 1946, noted a list of 72 Territories to which Chapter XI of the Charter applied.

Today, 17 Non-Self-Governing Territories, as listed below, remain on the agenda of the C-24. Member States which have or assume responsibilities for the administration of such Territories are called administering Powers. 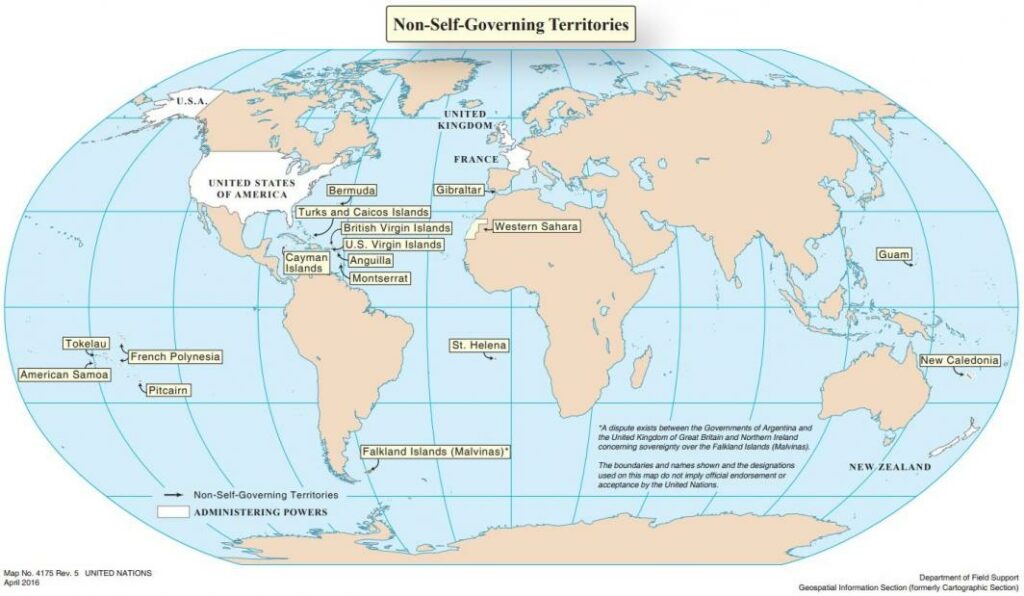 [i] All data is from United Nations Secretariat 2020 Working Papers on Non-Self-Governing Territories, and for Western Sahara, from UNdata, a database by the United Nations Statistics Division of the Department of Economic and Social Affairs, United Nations.

[ii] On 26 February 1976, Spain informed the Secretary-General that as of that date it had terminated its presence in the Territory of the Sahara and deemed it necessary to place on record that Spain considered itself thenceforth exempt from any responsibility of any international nature in connection with the administration of the Territory, in view of the cessation of its participation in the temporary administration established for the Territory. In 1990, the General Assembly reaffirmed that the question of Western Sahara was a question of decolonization which remained to be completed by the people of Western Sahara.

[iii] A dispute exists between the Governments of Argentina and the United Kingdom of Great Britain and Northern Ireland concerning sovereignty over the Falkland Islands (Malvinas).