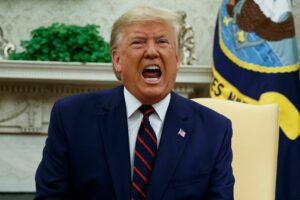 21 Nov 2020 – For a while, they were a source of amusement among Twitter pundits, cable news commentators and late-night talk show hosts: Donald Trump’s delusional tweets that he had actually won the presidential election and the comically inept efforts of his legal team, led by an unhinged Rudy Giuliani, to try to overturn the results that have made Joe Biden the president-elect.

The farcical nature of this “clown show,” as MSNBC’s Wille Geist called it on Morning Joe this week, was fully exposed in jaw-dropping press conference this Thursday [19 Nov] at which Giuliani, with what looked like rivulets of hastily applied hair dye streaming down both sides of his face, quoted lines from My Cousin Vinny and threw out baseless allegations of election fraud. Meanwhile his accomplice, the conspiracy theorist Sidney Powell claimed that Trump “won the election by a landslide” and the only reason the votes don’t support that claim is because they were tampered with by “communists” in Cuba and Venezuela.

The farce on display even prompted Christoper Krebs, fired by Donald Trump two days earlier as the administration’s most senior cybersecurity official responsible for securing the presidential election, to weigh in:

That press conference was the most dangerous 1hr 45 minutes of television in American history. And possibly the craziest. If you don’t know what I’m talking about, you’re lucky.

But, folks,  the joke is over. This is no longer funny.

It’s time to step back and realize we are witnessing something this country has never seen before: a sitting president trying to undo a free and fair election and challenging the very basis of our democracy.

Tweets and frivolous lawsuits are one thing (and the Trump team has gone 1 for 32 at last count). But this past week, Donald Trump crossed the line into potentially illegal territory. First, he called an election official in Michigan’s Wayne County, reportedly offering his support for her decision not to certify that county’s heavily Biden-favoring vote (a decision she later backed down on) and then invited a delegation of Michigan legislators to the White House, in an apparent attempt to block that state’s 16 Electoral College votes from going to Biden even though the former vice president won the state by more than 150,000 votes. (In 2016, Trump won Michigan by just 11,000 votes.)

“The president’s unpatriotic behavior is reaching new heights with summoning state legislative officials to the White House,” Joanna Lydgate, the national director of the Voter Protection Program, told The Washington Post this week. “This raises serious legal and ethical concerns about the president’s conduct — but it will not alter the outcome of the election.”

That the two officials who did come to the White House later said they had no plans to challenge the Michigan results is not the point. The point is that the president of the United States is doing everything he can to stay in power even though the people have voted him out. As The New York Times put it in an unusually direct headline on Friday: “Trump Targeting Michigan in His Ploy to Subvert Vote,” and calling the invitation to the legislators a “brazen step” to “subvert the will of voters.”

On Thursday, Joe Biden issued his most forceful rebuke to Trump and his delaying tactics, saying Trump would be remembered as “one of the most irresponsible presidents in American history.” Speaking after a meeting in Wilmington Del. with a delegation of Democratic and Republican governors, the president-elect said: “It’s hard to fathom how this man thinks. I’m confident he knows he hasn’t won, and is not going to be able to win, and we’re going to be sworn in on Jan 20.”

Finally, some Republicans are beginning to speak out—though, notably, no one in the leadership team of either the Senate or the House. The boldest statement came from Mitt Romney, the party’s 2012 nominee and the lone Republican senator to have voted to impeach Donald Trump earlier this year:

Another rebuke came from Jeff Flake, the former senator from Arizona and someone who has been mentioned as a potential 2024 presidential candidate:

There are no words to describe how inappropriate this ishttps://t.co/4qMUqf2y7c

But there has not been even a peep of protest from either Senate Majority Leader Mitch McConnell or House Minority Leader Kevin McCarthy,

I recently read The Splendid and The Vile, Eric Larson’s masterful book about Winston Churchill in the darkest period of WW II, and I came across a passage that brought me immediately back to 2020.

After another disastrous setback to the British forces and the continued ineffectuality of Britain’s prime minister Neville Chamberlain as he clung to the little power he had left, a back-bencher named Leopold Avery stood up in the House of Commons and shouted down at Chamberlain, “You have sat too long here for any good you have been doing. In the name of God, go!”

It is time for someone of principle to stand in the chamber of the United States Senate and shout out the words, “Donald J. Trump, in the name of God, go!”